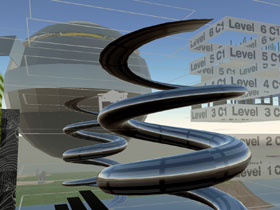 The Port is a virtual island of 16 acres (about 6, 4 hectors) inside the on-line 3D world Second Life . Second Life is a space on the net where a parallel world in continuous expansion is being built, modelled by its own residents, that has meeting places, commercial spaces, artistic projects, and what is more incredible they are thinking and building the 100.000 avatars that they already live in.

The project The Port was officially opened August 26 2005 by the artists Simon Golden e Jacob Senneby , with the collaboration of the architect Tor Lindstrand and of Frida Cornell . The Port offers itself as a space, community, arena for experiments. The members of The Port are artists, architects, programmers, “thinkers” that experiment and ask themselves about notions of v alue-creation in virtual spaces, about the nature of immaterial production and property, entwined with on-line and off-line reality, about the possibilities of virtual worlds that work as public spaces, about the concept of community in a trans-local sphere.

The community of The Port counts around fifty collaborators spread around the world, but the place is made up of all of its users, it is a 3D model open to all the residents of SL, which includes spaces for discussion, artists’ installations, architectural structures, a garden, concerts, debates about the new forms of participation and decision making, dance workshops.

It’s fantastic to fly among the architecture areas and installations, or walk along the suspended transparent corridors that organise the space, enter into an art gallery or into a television studio, with a sound track looked after by the artists and diffused in the space. Effectively The Port is proving to be a propelling place of initiatives and projects, which also involves the world outside of SL.

Objects of virtual desire is an example of a connected project . Senneby and Golden have collected a series of immaterial objects, bought in SL and chosen for some particular sentimental value with the person who modelled or owned it. These objects are re-proposed on the site  shop, and can be bought in a physical form, re-built in the real world and sold within our economy, together with the photo of the virtual object and the avatar of its previous owner.

The work of art Cubey’s Penguin Ball , produced in SL by Cubey Terra , was reproduced as a blow-up penguin inside a two-metre diameter transparent pvc sphere, offered at 3300 euro. One of his models, already made, was presented in October at Game Dump at the Bergen Kunsthall ( Norway ).

The Port is an international meeting point that proposes cultural events that are not necessarily tied to the net. For its inauguration last September the Tensta konsthall 2 , an exhibition space inside The Port, proposed a retrospective of the Canadian photographer Jeff Wall more or less at the same time as his exhibition at the Tate Modern of London.

The exhibition was organised by The Port and by the International Festival of Stockholm, (International festival is a project between architecture and performance that presents work in different contests and has exhibited in Stockholm , Berlin , Zagabria). Moreover, the choice of inaugurating with a photographer who for 20 years has been investigating the real world and its performance took on a particular meaning in this context. Large images put up in two rooms with leopard skin floors, walls and ceilings and a 12-mega catalogue to download in PDF, with critical texts, an interview with the photographer and snapshots of the virtual fitting of the inauguration, with avatars in front of the exhibited works of art.

From the world of The Port a magazine is coming to life, Flack Attack that is building on the Wiki model and with editorial meetings between avatars that are held in the head office of the magazine in SL. On the site of the magazine, it is possible to follow the work done in the 12 preparation meetings for the first number in December 2005

The issued first number Flack Attack on Autonomy , downloadable in PDF, faces topics about autonomy inside preset codes. The topic is faced by putting into comparison and into relation the concept of autonomy in real spaces and in data-scape. In both cases autonomy is in relation and in conflict with systems of stable rules, they being physical and tied to social codes, or in virtual spaces, where all of the interactions and possibilities happen inside a code that has already been programmed by others.

The project The Port was held at the Whitney Artport for the whole month of December 2005.