The Migratory Dance Of The Vital Cycle 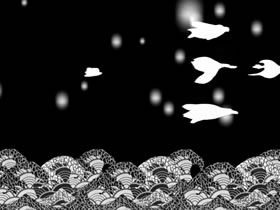 I’m watching the videos of Carolina Melis, I close my eyes and, by magic, migratory birds come into my mind, flying from the wonderful shores of Sardinia to Brighton, a little town by the sea, an hour’s train journey from London .

The constant migrations are part of a path more and more artists decide to follow. Carolina Melis herself left her native Sardinia more than ten years ago to continue her dance and choreography studies in the Unite Kingdom . During this personal journey, the young director develops an interest in animation and illustration, filled with a Master in Communication Design at Central St Martins of London .

She begins to find the first fulfilments straight after the end of her Master, in fact her video, In Which a Butterfly Lands on a Zebra’s Head , selected in 2004 from the itinerant festival onedotzero , goes round the world. The video is a work wisely structured. In the opening, on the screen, empty at the beginning, a thin blue thread unrolls at music rhythm, turning to flowery stems in a few instants. The natural dance starts under our astonished eyes and with great simplicity we observe what we could define natural cycle caught in its most joyful moment. The animal and the vegetable kingdom are the absolute heroes: vital lymph circulates in the stems, flowers blossom, butterflies alight on them, curious giraffes observe fascinated an explosion of flowery fire works while zebras of different dimensions follow each other. The flight turns in each moment into a delicate and colourful dance, a real party, a meeting of vital creatures.

The images of the videos of Carolina seem a good tale to show children before going to sleep, such as a magic lantern projecting drawings on the walls of an animating world. Rocked by the sweet melody The happy sea by Colleen (the French artist Cécile Schott), we witness to a new explosion of flowers and colours and to the flying of petals and corollas. Ink drawings remind us of Japanese art, with a predominance of blue, red and black in a crystalline atmosphere. The music of Colleen, a sort of electronic folk is perfect for the images. Bloom and Torch develop in the same way, on music by The Customers , a sequence of ink drawings, feathers, shells and petals turning into butterflies, falling and rising, evoking the natural organic cycle. The passion of the young artist for dance and choreography is praised thanks to these little gems of animation.

The last video of the director living in Brighton , As the crow flies , develops from the idea of a migratory path. It is directed in collaboration with Susanne Flender and the music is by Metronomy , an other artist living in the same English town. The idea is to put into video a process similar to the so-called Chinese whispers, where some players watch a figure for a few instants, redraw it straight afterwards, basing their drawing on the memory of it, before passing it to the following participant. The initial image undergoes an incredible transformation in an infinite visual- narrative game. The drawings for this video have crossed many towns in a journey through the United Kingdom , reaching Brighton, Aberdeen , London , Oxford , Birmingham , Leeds, York , Newcastle , Durham and Edinburgh .

The realisation technique of the illustrations of the video needed a pen near Stabilo 68 on white paper; the drawings, acquired by a scanner, animate with Photoshop, After Effects and Final Cut.

The works of Carolina Melis differentiate for sensitiveness and femininity, a touch that, in my opinion, is good in an artistic world dominated mainly by men. Moreover, thanks to the recognitions she received during international festivals, the house of production Nexus of London , which produces animations, commercials, music videos from 1997, wanted the young director together with a constellation of respected names such as Cyril Houplain, Gabriel Malaprade, Jonas Odell and many others.

Anyway, we notice once again that many of the young creative minds of our country have a possibility to succeed and have recognitions only when leave Italy . Without complaining about the Italian situation, we believe there is a chance to spread ideas and creativity with no frontiers in a discovery path, day after day.

Alessandra Migani: We know you moved in UK from Sardinia to continue your studies of dance and choreography. Why? Do you believe Italy do not offer real opportunities of expression for emerging artists yet?

Carolina Melis: Before coming in UK , I have lived for a while in Denmark . I moved there when I was 16 in order to study dance, then for a series of coincidences, I got to England . I studied dance at London Contemporary and at Dartington College of Arts and I left when I graduated, simply because the environment wasn’t stimulating me any longer, but I can say the most determined friends of mine, who decided to continue, have succeeded. I think that in England there are much more possibilities of working in the field of dance, partly because the government sponsors a large part of little and big companies and events.

Alessandra Migani: What have you pushed afterwards to approach to video animation?

Carolina Melis: When I studied dance I started to learn how to use graphic and animation programs such as Flash and Photoshop. I become so fond of them that I found myself working full time as a graphic and web-designer for Tiscali. I liked the job but it wasn’t really creative, so I decided to leave it and to start working on my projects. I went back to England and I attended a Master at Central Saint Martins in Communication design specialising in Illustration and Animation.

Alessandra Migani: Which type of course did you attend and how have you started to work in this field?

Carolina Melis: I studied dance at London Contemporary Dance School and at Dartington College of Arts and illustration and animation at Central Saint Martins. The Master at Saint Martins has undoubtedly defined what I’m doing now. It was very stimulating as much as competitive.

Alessandra Migani: Have you found any difficulties in becoming part of a male-dominated environment?

Carolina Melis: I still haven’t found any difficulty but what amazes me the most is exactly what you say. Animation is like embroidering, it is repetitive, and requires attention up to the details as well as an infinite passion.

Alessandra Migani: The video you made for Colleen, The Happy Sea, has been selected by national and international festivals, such as onedotozero, and has been going round the world. How did you meet this artist and how did you develop the idea?

Carolina Melis: I sent my reel to Leaf (Colleen’s label). They liked my works and asked me to make a video. The idea was conceived thanks to the music. When I received the CD, I spent weeks and weeks listening to it and trying to figure out colours and possible dynamics. It was quite a long work, as well as quite complicate, but I am happy about the result and the response was very positive.

Alessandra Migani: What does it happen in your music videos? They seem well- organised choreographies where the animal and vegetable kingdom animate in a delicate dance. Do you manage this way to praise your passion for dance?

Carolina Melis: I love simple things and natural dynamics: action-reaction, cause-effect, rise- fall. In must say I am very inspired since I studied choreography, but on the whole I think that they aren’t so different

Alessandra Migani: You have a contract with Nexus, which kind of opportunity are they offering to you?

Carolina Melis: I have just started and for the moment I am very happy. I like team work and the works Nexus is proposing to me are really interesting.

Alessandra Migani: In your last video, As the Crow Flies, you collaborated with Susanne Flander. Explain us how you worked together and which technique have you used.

Carolina Melis: We conceived, directed and produced the film together, a collaboration at 100%. The film is the result of an exercise of chain memory. A drawing of a bird was shown for 5 seconds to the first participant who was asked to redraw the image in a new sheet of paper. The new drawing was then shown to a new participant and so on. We collected 500 of them drawn by both children and adults, and used them as the basis of the animation.

Alessandra Migani: Which other projects do you have for the future? And which artist would you like to collaborate with?

Carolina Melis: I would like to make more live actions. At the moment, I am collaborating with Metronomy, who conceives the music of my projects, and I hope this collaboration will carry on.