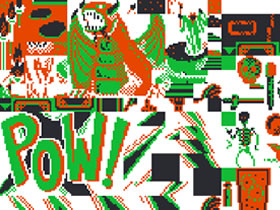 Game Art originates often in the combination of two big passions: love for programming and for videogames. Besides, it happens quite often that those two passions originate together, and many are the hackers and the programmers who have discovered the delight of the code playing at Super Mario Bros .

Brent Gustafson cultivates both passions with an unusual regularity and uprightness. Gustafson, who was a Walker Art Center di Minneapolis, is particularly interested in emulation as an instrument able to assure the survival to the culture and the aesthetic of arcades and of 8 bits games, which are inexorably being cancelled by hardware obsolescence. ROM Color , one of his most recent works, refers to this interest. The technique has already been used by Benjamin Fry in Mario Soup , even if with some interesting changes. It originates from the utilisation of a peculiar feature of old tuners. In them, in fact, images constitute each little image appearing in the screen- in jargon “sprites” are often memorized as rough data at the end of the pure code of the program, in a long series of 8 x 8 pixels.

This is less strange than you could think: each executable code mixes different data, including images and applications. In this case, the unusual thing is that the sequence of 8×8 pixel images appear directly in the code, in black and white, where the black pixel correspond to a bit up, and the white bit to a bit off: 1 and 0, a bit. In Mario Soup, Ben Fry only visualized these sequences of images, mixing each pair of image in order to form an other one, with 2 bits and four colours. This way, two levels of image are created, a blue and a red one, which, seen superimposed, give us back the real image.

Gustafon goes beyond it. First of all, he extends his operation of visualization to the whole code of the toner, not only to the images, which means that ROM Color makes visible the “sprites”, the music and the functioning of the whole game. Code and image are equalized and both are visualised with the same process. Moreover, abandoning the sobriety of the blue and red clothes used by Fry, Gustafon tries new matching, from dark green/ mustard yellow of Mega Man 6 to blue/ cream of Super Mario Bros 2 . The result of these experiments is a series of patterns of deep iconographic effect, alternating images recognizable to wide abstract sectors, where pointillism gives way to geometric abstraction and sometimes even to a phytomorphic decorativism with the mark of Art Nouveau.

The force of these images depends on two fundamental elements, both of which have their origins in pop: on one side, the superimposition of two levels of colour creates serigraphy effects, giving to some of the most brilliant images, as the dreadful Wario in the middle of Wario’s Woods , the stature of authentic pop icons. On the other side, the sequence of rectangular sectors inside a single image recalls the paintings of Warhol where the image itself was repeated in series for dozen and dozen of times varying just for the accuracy of serigraphy as for the neglected dose of colour which sometimes gives birth to quite completely cancelled images.

The effect is the same, but everything is left to the machine, without any intervention from the artist (at least as far as composition is concerned) which Warhol, who wanted to cancel the presence of the artist in the work in order to “become machine”, would appreciate without any doubt.

Besides, the meaning of ROM Color transcends its iconography effect. The author explains: ” ROM Color is an other way of taking the original games, put beside the game, which was never thought by its authors. If it is not possible to interact with its output, the method originating it is the same: a calculus process starting from the code of the machine in order to produce a visual output from the previously mentioned code.”

In other words, if Ben Fry, in Visually Deconstructing Code the complex project Mario Soup is part of- tries to let visible the functioning of the code and to show how the code acts and works ( it’s not just a case that, making a distinction between image, which is visualised as it is archived, and code, which is visualised “in progress”, with a process of visual translation which shows its functioning), for Gustafson it is enough to show the code “as it is”, adopting the same process chosen for the images, and therefore putting them deliberately on the same level, showing us they have the same nature and that each one is visually as good as the other, and he does it playing as an hacker does. And as an artist should.