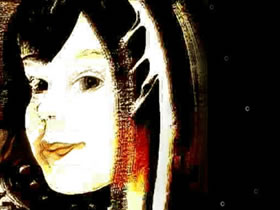 It will be a passing phenomenon, a momentary tendency, but there is remarkable a productive underbrush within the ambit of new-folk, that demands continuous attention and analysis. Fonal is a recent discovery, simply fantastic label, that encloses a sort of Nordic hippy community, a detection that slowly blooms in the international panorama.

The captain of Fonal is Sänpäkkilä, aka Es, quite famous for his apparitions for German (K-RAA-K)3, not new in this context, and of which the optimal Sateenkaarisuudelma deserves a note, but who would need some more space for being analyzed. Fonal is actually active since 1995, born in Tampere, Finland, where it still resides, publishing several Finnish bands that cross ambient, experimentation and a hybrid vision of POP folk psychedelic.

2005 is the year of the publication of an exemplary disc to understand the poetic of Fonal, called Yhä hämärää, recorded by one band from the north of Finland , more precisely Savonlinna: the Paavoharju. For sure one of the best disc released this year, as much of the international press said. Yhä hämärää is a magical disc, possesses an absolutely singular, expanded ambient but also concise, lo-fi and freak. The Paavoharju does not hide their religious inclination, also through the lyrics, in Finnish, but of which you can find the translations in English, completely perceivable in the songs and the religious choruses, and in the charming singing, always present, nearly charming indeed.

We contact Lauri Ainala, spokesman of Paavoharju, with which we exchange some questions and opinions about the musical and cultural influences of the band, and of their imaginary and visual approach as well.

Simone Bertuzzi: Which is the background of Paavoharju? I find multiple influences in your last album Yhä hämärää… Which are your favourite listening?

Lauri Ainala: When a church is full of people, young and old, singing the same hymn and everyone sings in a slightly different manner or velocity, there’s a sort of ambient unique and incredibly fascinating. I love melodies and lyrics of these hymns as well, so plenty of life and feelings. Old Nintendo videogames, C64, Amiga, Sega Master System & Megadrive, Super Nintendo have a wonderful music that we listen with pleasure. We’ve also listened lots of “tracker music” of 1989-1995 and artists like Purple Motion, Skaven, Dizzy and some more famous “tracker musician”.

I always try to keep my eyes and my ear open to find new interesting sounds, imagines and everything could be relevant. I listen to everyday sound, sounds from the nature or from the animal, sounds from the cars. OST and television music influence our subconscious, and our subconscious itself is the source from where our music comes. The following bands/musicians inspired in some ways the creation of an original music, richly imaginative, with strong sentimental aspects: Joose Keskitalo, Es, Boards of Canada, Michael Jamson, At The Gates, Bin3333, Xinlisupreme, The Shadows, The Beatles, Tapio Rautavaara, Tero, Mr. Oizo .

Simone Bertuzzi: I surely find all this components in your music. But I also feel oriental/Indian influences in the general mood, through the melodies, in the songs. I find a sort of special tension between localism, strictly connected with your country, and something that travels to the opposite sphere of the planet, India maybe, as I was saying before.

Lauri Ainala: Actually, as none of us has seen the movie Bollywood, listened to oriental music and not even visited India or some other oriental countries I can surely say that we didn’t noticed that our music included this elements until someone said this (I don’t remember who was the first). I think that the way Jenny sing has in its nature (she’s hundred per cent self-taught singer) some oriental magical influence [oriental magickk]. Jenny has surely listened to some world music, but definitely not oriental, except Akira, Neon Genesis Evangelion, Serial Experiments Lain, Princess Mononoke and some more. Maybe she’s been influenced in part by these sounds I’m not sure. But it’s interesting how our music includes so many stiles that make it so unforeseeable, mysterious and attractive.

Anyway almost anyone noticed that Jenny do not sing in all the songs of Yhä hämärää that have a feminine voice. We have another female singer, her name is Soila Virtanen, who did a great job in the songs Ilmaa Virtaa and Vitivalkoinen!. Both Jenny and Soila (also known as Sy or Mayhem), are special individuals, whose personalities come out during their performances. The biggest influence of Soila is Diamanda Galas, a black metal singer, moody and vampiric, that encloses the relationship cruelty/beauty of life. The voice of Soila will be present in the future  it’s a promise!

Simone Bertuzzi: There’s a track I’m pretty interested in, On Yhä Hämärää, that gives also the title at the album. I find its incredible ambient absolutely perfect made. I’d like to know something more about its creation. It seems coming from a religious hymns recording. Moreover, you said that you’re always listening to nature and city sounds. Do you record them as well?

Lauri Ainala: Yes, On Yhä Hämärää mainly comes from recordings of religious hymns. There are several parts taken from MC 30-40 years old and some other come from personal field recordings realized in West Finland churches. There’s a fragment of a melody played by my brother Olli and a sample of our Grandpa singing in the 70’s. He died in the ’74, I’ve never met him. Obviously there are lots of little details hidden in the track that can be heard by themselves. It took me two year of work to create Yhä Hämärää, I had lot of time to develop until its final form but I can’t remember all the material I’ve included.

Talking about your second question, I’m not used to field recording, because I always forget to take my recorder with me but recently I bought a digital camera that gives me the possibility to record sounds and I’ve already recorded some good material.

Simone Bertuzzi: I’ve seen the Fonal showcase of the last Sonar festival edition in Barcelona . Every live set (Es, Kemialliset Ystävät e Islaja) had a visual support built with an only overhead projector, coloured sand and water. All these elements, combined with some candles on the stage and the musicians created an very comfortable ambient exciting. Can you tell me something about your visual imaginary? I’m fascinated by your “domestic” images, referring to the back of your album, but also some portraits on your website.

Lauri Ainala: The images you’re referring to are not planned by real situation. We lived in harmonic and ethereal places, so the images can’t be nothing but beautiful and plenty of mystery. These pictures have been taken by an old friend, Juho Pitkänen, who came to Tuote, an old abandoned fabric of diaries that we occupied, during the summer of 2004. The old window that appears in the back of the album Yhä Hämärää is a part of a house infested by the spirits, where the “Denzos of Savonlinna” (Greets fly to J-Karjalainen, Kuisma e Morgan Kane) lived.