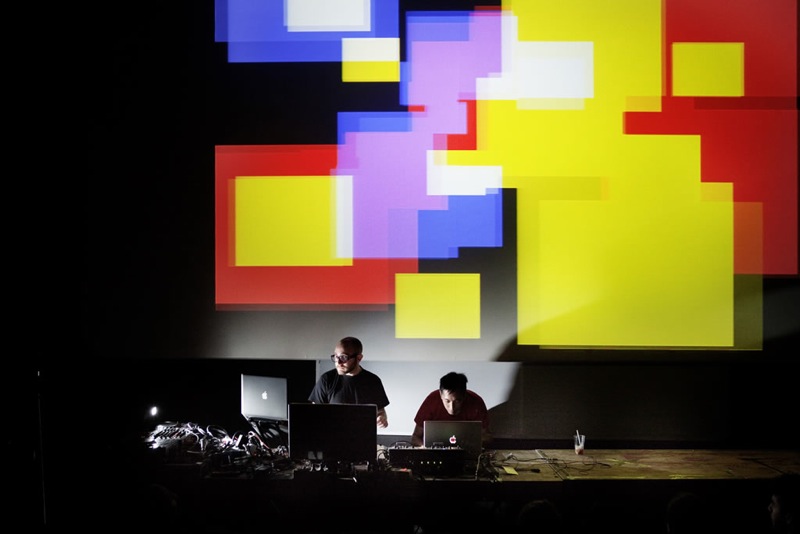 The second edition of LPM-Live Performers Meeting, kept in Rome on 9th and 10th December 2005, has seen the participation of more than sixty artists from Italy, France, Belgium, Croatia, Thailand, Denmark, England and Uruguay.

Organized and produced by Flyer Communication LAB, in association with FlxER, Shockart, Deliriouniversale, Homework, Peam, Electronic Art Café, the event has been kept into Linux Club. These two days have been a continuum of workshop, audio-video performance, dj and VJ sets, giving the festival the chance to become an interesting moment of meeting and confrontation for the experts and a good point of observation to understand how music, video and graphic can be combined in live performances. The audio-video performances have represented one of the moments of the two days, as point of revolution and fusion of vjing and musical production.

The interesting reality emerged by tons of audio-video performances is that of a contenting and aesthetic research where the vj is more and more busy in a creative and innovative job, who involve him in the pre-production and in live.

During the first day it has been very interesting the performance A/V of Leo Gullotta and Jemma Temp : the result of the particular work of the two roman artists is a mix between a piano concert and a vj-set of Jemma, where the music melt with a searched selection of slow and vanished images.

The second day of LPM-05 a particular place goes to Monotono, work of the Turin guys Besegher and Flushing Device, an optic trip who tracks down and investigates the relationships between movement, light, colours, the frequency and the sound they generate. While Besegher uses visual as wallpaper, Flushing Device describes an expanded and rarefied sound space, composed by natural disturbing sounds and long guitar feedbacks, linear melodies and minimal beats.

Saturday night closed with an audio-video performance of World Tour , born by the collaboration between Forrest Drum and Kinotek . The work is a real sound trip, the passages are a mix of instrumental and sound elements from the country crossed. While Forrest Drum uses sample of songs that represent a visited nation, Kinotek conduces a parallel research of videos, collecting symbols and specific images that evoke the theme of the journey. World Tour is an itinerant work, structured through the research and the parallel composition of musical and visual elements of the chosen nation.

After the part dedicated to audio-video performances, the festival has reserved the night to the vj-clash. The flexibility of the program and the unlimited opening to new participations has given the opportunity to all the artists to perform during the night. In the familiar atmosphere of Linux, affirmed VJ and not have worked together using the ten screen prepared for the occasion. LPM asserts itself even in this edition, thanks to the multiple adhesions and the sensation of novelty, as space open to the free expression, to the research and the experimentation. .

Elena Vairani had the possibility to meet and interview Gianluca Del Gobbo , inventor of the experimental project FLxER.net and founder of Flyer communication, mind and responsible of the LPM organization. Passionate of technologies, experimentation and technical applications, during the night of Friday 9 th December he presented, during the introduction of the live video phenomenon in Italy and its strict link with the web, the new version of FLxER.

Elena Vairani: Can you briefly introduce us to the LPM-05?

Gianluca Del Gobbo: This year the meeting has put up more than 50 groups of artists coming from 8 different nations disposed on two days into the Linux Club in Rome. 1500 visitors have the use of a huge number of audio-video performances, showcase, but most of all (thanks to the wi-fi network of the Linux Club) to the exchange of information connected with the culture of audio-video world. The set impact has been considerable, with all the surfaces of the Club occupied by “some” laptop, video camera, cameras, video mixer, midi controller, etc All of this immerse into 9 video projections with 15 LCD monitors spread, hang at the ceiling.

The central circular console full of technology, always working to wire and unwire is the symbol of this exhibition. It’s an absolute fusion of signals, a perpetual and announced visual flow where every artist feed the perceptive dialog, in a becoming of style and technique, emotions and solutions, strictly linked with each others in a tactile level, more than a digital one. The meeting has been physical, real about the contents, and that was our point so we’re satisfied and the participants as well.

Elena Vairani: Are there any substantial difference between this edition and the others?

Gianluca Del Gobbo: Yes, there are. The first edition has been realized to present the FLxER 3.0.1, so structured around it. The project of this year has gone further, not forgetting our software obviously, presented in its new version 4alpha that we’re still developing. There was more interest on the artists, most of all audio-video performers. The exhibition divided in two days gave us the opportunity to combine close kinds and create two days stylistically different, giving the opportunity to immerse yourself but also to compare.

Elena Vairani: Among all the performances during those days, have you seen something that particularly impressed you?

Gianluca Del Gobbo: First of all we’ve been impressed by the enthusiasm of people who want to express their selves, and that was a gratification itself. We don’t want to name an artist in spite of some other because we think it’s just a question of taste. Obviously we’re impressed by creativity, novelty, fresh ideas and we’ve seen a lot of that. Talking about the vjset aspect, we’ve been impressed by the way people with many years of work have worked without any problem at the same conditions of the new comers, in a loyal and constructive way. I don’t know if we can talk about new and old school, but there were lots of skilz to fire the retina.

Elena Vairani: Let’s talk about the success of the Flxer and the peculiarity of the last version.

Gianluca Del Gobbo: FLxER is born as a game, and the game became more and more interesting as time went by. The first idea was mine and of Alberto Bordonaro ( b_muvis videokru and bluecheese project ), and in 2001 was presented at the Biennale of Valencia. Then inside the blucheese factory, the console grown up entrust to the experience of the b-muvis videoklan components who made the FLxER a more and more refined instrument. After the clearing of the Bluecheese Factory, the project went on and, thanks to the Flyer Communucation, the website flxer.net has been realized, where a community put down roots and a database of sample started to be composed. Now there are more than 5000 users and 30000 loops.

There are several characteristics that made FLxER successful. First of all we’ve chosen to distribute it free from the start. With Flash8 we’ve implemented all the new characteristics of blending and some effects. We’re improving the interaction with the user. It will be possible to use more and more shortcuts and they’ll be simplified and combined with the use of the mouse, so that there’s more control, more fluid and dynamic, to modify the short movies exactly how you can do with postproduction video software. The more interesting aspects are surely the xml recorder who gives the opportunity to record live in a few Kb, the sequencer who moves the FLxER closer to an electronic battery and the broadcast function, who gives us the opportunity to enter the same scene and interact in the creation of an only “coral” composition. We’re therefore plan a new project who will be structurally similar to an orchestra of vj who will be able to exhibit in the auditorium all over the world at the same time or in your house alone, without any cost because you will command the projections from everywhere, sending just a few Kb around the wired world.

Elena Vairani: Will LPM have the same organizational structure next year?

Gianluca Del Gobbo: We think we’re on the right way, but there are still lots of thing to ameliorate and lots of ideas. The basis will remain the spirit of the meeting with horizontal exchange and not a pyramidal structure.

Elena Vairani: Do you believe there’s a formula that allows events of this type, who see a huge participation of artists from all over the Europe, to involve people not expert to promote the vjing reality?

Gianluca Del Gobbo: We think this is the formula that best approach the live video, who gives a time and a space more human to become acclimatized to the myriad of facts that happen every exhibition. We’re interested in giving instruments of reading to people who’re not in the argument and at the same time give to the more exigent public a moment rich of elements. During the LPM people ringed the artists to observe closely what exactly was happening, behind a keyboard. And there were lots of people who were making question, also because they found answers.