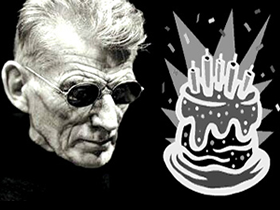 There are a lot of editorial initiative and public events in occasion of the 100 th anniversary of Samuel Beckett (while there are a lot of discussing about the feminine rapresentation of “Waiting for Godot”, directed by Roberto Bacci, Pontedera Teatro). First of all, the fisrt and only Italian website dedicated to Samuel Beckett, conceived by Federico Platania, that has a precious database with essays, international bibliography, biography, a section for the events of the anniversary.

Between the events, 1906Beckettcentoanni2006, beckettian Festival organized by Giancarlo Cauteruccio for the Kripton Company at the Teatro Studio in Scandicci ( Florence ). The festival ( that will last until April with the most important research Italian company: Virgilio Sieni, Egumteatro, Motus, Roberto Paci Dalò and Gabriele Frasca, Enzo Moscato, Remondi and Caporossi, Carlo Cecchi), open with the national prime of Trittico Beckettiano, directed by Giancarlo Cauteruccio: Act with no word I, Not me, The last ribbon of Krapp, with Fulvio Cauteruccio, Monica Benvenuti, Giancarlo Cauteruccio (from 13 to 22 January at Teatro-Studio ini Scandicci).

Then the manifestation goes on with a beckettian video review, called The beast of the glance, by Riccione TTV and a convention presided by Siro Ferrone of the University of Florence. Don’t miss the video performance of Motus, “A play, that again”, inspired by All strange way (5 th February). The celebrations will end on April the 13 th with Happy Birthday Beckett, by the critical Franco Quadri.

The editorial event is” Playbeckett-multimedial vision in the works of Samuel Beckett”, the volume of Halley Editrice published in these days, by Massimo Puliani, Ordinary Professor of Directing Institution at the academy of Macerata, and Alessandro Forlani, teacher of Metodology of Screenplay at the academy of Macerata and theatral author. It is a very important collection of essays about the filmic, television and radio production (written by critics like Valentino Bellucci, Gualtiero De Santi, Danilo Caravà, Federico Platania) and on the historical Italian directions of Beckett’s works. Puliani nad Forlani have also their own blog about the book.

The book has also a short note of mine about the interpretation of Julian Beck in That Time (1985), directed by Gerald Thomas, young pupil of Ellen Stewart. That was the last interpretation of the Living Theatre’s founder, ill with cancer. From a dark scene, face of a character came out, listening the story of his past from his own voice in three parts: Beck’s voice was recorded in studio and mixed with John Cage’s and Luciano Berio’s music.