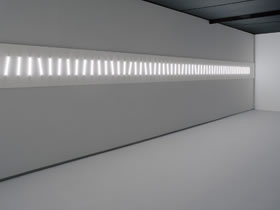 If music has the possibility to release itself as it likes in the ambient where it’s proposed, sound art on the other hand has a strong and rooted relationship with the space where it plays. This is an absolute fact, even if lots of people often forget about that. It’s one of the strongest and interesting theme of the debate between attentive listeners, artists and insiders.

In this contest, one of the greatest role is therefore covered by art galleries, where works born, evolve and find the visibility to the public. In Italy there are just a few galleries who’ve always been attentive to value exposed works in relationship both with the public and the fruition space of the work. I had the pleasure to ask some question to Carlo Fossati, director of the gallery e/static of Turin that, during the years, has turned out to be one of the most interesting realities in Italy. The level of exhibitions and projects exposed is always high, related with the sound art, but not only that, as its founder and director says. A path that’s often difficult, that of e/static, full of satisfaction and difficulties, following a utopian dream still after seven years, who’s preparing for a 2006 of changing.

Luca Bergero: How and which are the aims of the e/static project?

Carlo Fossati: How everything starter it’s a long, long story, too complex to tell in a few line. The aims: first of all I wanted to create something that didn’t existed, that I in person felt the lack of, “a space dedicated to the art of the present time”, as our headed letters still say, near our logo e/static. The name itself it’s a program, a sort of neologism, formed used two existent words with precisely meanings. Estasi (ecstasy) from the Greek ekstasis that meant the fly of the soul out of the body in opposition of stasi (stasis) from the antique Greek stasis, that suggests a situation of immobility, opposite of the ecstasy. I see these two words as elements of an osmotic relationship. Ideas are actually dynamic, elusive. So sometimes we need to stop them, even if for a limited period of time, in a form or situation defined, in relation to the space where they’re found.

Luca Bergero: E/static born from the conversion and architectonical revaluation of an industrial complex in Turin . Looking to the contrast between the decadent buildings out of the gallery and the internal reborn of the expositive spaces I felt a positive sensation. How much is important to use spaces with historical and morphological characteristics you have?

Carlo Fossati: I search for this space for a long time, without even know what I was looking for. But when I first saw it from the outside, with those huge windows, I suddenly understood it was the one I was for me. Choice confirmed by all the experiences I lived during these years, every time naturally and every time differently from all the others. We have to consider that this type of industrial spaces, built up during the first decades of the last century, was created to give as much natural light as they can to people who worked there. They had a huge volume, in a simple way, with huge windows on the walls and skylight. Things that work even in a different application, as an exhibition of contemporary art. And this way of building up the structure guarantees the best conditions to realize works or performances with a large sound part, thanks to an optimal acoustic, most of all on bass and medium frequencies.

Luca Bergero: During the last edition of “Artissima” in Turin , e/static was present with works of Steve Roden and an important installation of Hans Peter Kuhn. It’s been considered one of the greatest stands of the event. Can your dedication to art based on relationship between sound/image/ambient be your strong point?

Carlo Fossati: I think that during the years a sort of automatic association between the name of the gallery and the term of a visual and sound research is getting more and more common, so there’s a particular attention on our works. But I’m not sure this is just a good fact, as people could see e/static as a specialized space for sound art. I’d like to avert this, because I don’t want to feel limited. I’m interested in everything I like and everything that gives me new stimulus, I promote them, even they sounds or not.

Luca Bergero: Sound art works often require to born and develop in a precise place. As a gallery, you propose both works conceive for you and for other galleries. Is it better to recreate the feelings given by the place where the work was born or let the reaction of the work in a new place come out itself? Is it more significant the flexibility of a work to adapt to different places or the ability of a place to adapt to different works?

Carlo Fossati: Another complex question . It hasn’t frequently happened that e/static proposed works ideated for others places . In any case they were related with the space as they were completely new works and they created an autonomous system, somehow unrepeatable This is not a space-container, it has no vocation to be something like that, I think, and I absolutely never used it this way.

Luca Bergero: What’s the relationship between the Italian sound art and the world one? Do you see an artistic growth inside our country?

Carlo Fossati: Two questions, one answer: I do not really know! This expression, so repeated, that I always use with caution, is all about to loose its original meaning (supposing it had one) because it is assigned to many different things. I think we’re looking at something already happened with the “conceptual art”. In the early 70’s the expression was created to identify the work of a restricted number of artists that have lots in common. Than it was used more and more out of a turn, until the inflation and then the collapse and loose of meaning.

Luca Bergero: If the circuit of the sound art is dominated by “big names”, how much important do you think the valuation of emergent form of expression are? How does young artist have to relate with galleries?

Carlo Fossati: Do you really think that the “sound art circuit” is dominated by “big names”? Couldn’t it be that these “big names” are the only who can be in this category, and the young maybe should not even take care about this? I work both with “historical” artists as Julius, Kuhn, Fox, Suzuki, and young artists as Roden, Piscitelli, Yui, Petitgand. It’s important to me not to care about generation gaps, and when it’s been possible, I established a connection between the old and the young, in a community ambit and in a performance. Results are usually quite satisfying. The “piccolo concerto” (little concert) of Julius with Miki Yui last April is a clear example. In a few months a cd of the concert will be available . Anyway, I think that an artist should be truly shrewd in choosing the gallery to expose in. It should known.

Luca Bergero: As director, do you think that the interest for sound art is increasing among an heterogeneous public or is it still related to experts?

Carlo Fossati: Considering the public of e/static initiatives, I can say that some shows have been appreciated by our affectionate visitors, those who follow our activity from our start. Then our public has increased, always appreciating the exhibition proposed. Talking about the experts Who are they? Not many of them have thrown their selves into this new art, not even relevant here in Italy ! Maybe they thought about a curiosity, an exhibition of cultural snobbism that would have set in a while But since collectors started to buy, since exhibition started to be more and more popular, then they wanted to judge and understand without know.

I though esteem Daniela Cascella as critic, for everything she did, everything she wrote and everything she’ll do and write. She’s informed, rigorous, sharp in judging and observing. She’s so serious, that she’s different from all the Italian critics and editors, they are young or not.

Luca Bergero: Which are the principal difficulties and the bigger satisfactions in the management of e/static?

Carlo Fossati: The difficulties are many, they never lacked, they will never lack. And the engagements that must be taken in order to try to resolve them are too many, and continuously increase. Satisfactions are rarer, obviously, but real and true. I just hope that difficulties do not prevail on satisfactions, in order not to break off that equilibrium, often tenuous, who allows you to go on. I can say that the biggest satisfaction is to state that e/static is still here, after seven years, and still growing. But the fact that this project started, that something almost utopic is still living (I started everything without any certainty to succeed, lots of people expected a failure) is the greatest satisfaction, enough even if alone.

Luca Bergero: Can you anticipate something about the activity of e/static in 2006?

Carlo Fossati: Akio Suzuki in February/March (exhibition inside the gallery and a route outside, in the city); Christina Kubisch in April/May; Dominique Petitgand in May/June. After the summer it’s the personal second of Miki Yui , and then we’ll change space, always in Turin , but in the Aurora district. It’s time to change, to find new stimulus and give a new form to the e/static activity. Not a revolution, but a re-foundation of course!.