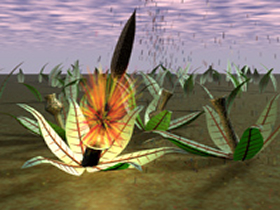 You have certainly heard about the singular convergence between evolutional dynamics and informatics. Probably you’re not stranger to the definition of Alife (see the article of Luigi Ghezzi in the last number of Digimag 10_Dicembre05-Gennaio06), of artificial life, and maybe even the one about the genetic algorithm. Let’s talk about the possibilities of application of the evolutional rules, or rather behaviours who implicate adaptation and auto-conservation, in creating artificial system able to auto-rule their selves, grow up and evolve autonomously as a natural system.

Scientists, biologists, engineers work hard on this project, as they found in this direction a big opportunity, both from a theoretical point of view, to go deeper and deeper in the acknowledgement of the evolutional processes, and from a more eminent practical point of view, to ameliorate the services of our technologies, hardware and software. But there’s a novelty. This research doesn’t seem to be an affair of big brain, but suitable for everyone. The project Darwin@Home throw this provocation.

Born on the “shoulder of the giants”, referring in particular to Thomas Ray and Karl Sims two gurus of the Alife and the firsts virtual ecosystem, Darwin@Home is trying to create a network of digital ecosystem on planetary scale. The novelty and the objective of the project is the observation of evolutional processes in a virtual ambient allowing everyone to interact, contributing to create the ecosystem itself and its creatures.

The hypothesis behind the project is that the space of computation of a computer is in this moment, or in a while, sufficiently rich and complex to support a simulation reasonably reliable of the processes and products of the evolution. The bet is to multiply independent groups of work, that will build up new platforms of experimentation to test this hypothesis.

On the website Darwin@home.org it is possible to visualize some platforms already realized to get a clearer idea of what’s the meaning of elaborate a virtual ambient who can develop on its own. Most of all they’re simulated ecosystem habitat of singular artificial creatures . You can follow its birth, its morphological evolution, the passages of its growth to a progressive improvement of their service, to the struggle for the survival and the transmission to their Children of the evolutional conquests.

Fluidiom realized by Gerald de Jong , one of the highest supporter of the project, provide the evolution of flexible structures who have the possibility to become creatures who are even able to walk. The idea of Gerald is to consider each of these elastic intervals, who will compose the creature, as a muscle animated by cycle of random movements inside an established range. Some simple initial rules will entrust the software the autonomy (this is in a few word what “genetic algorithm” means”.

Every user is invited to follow the evolution of the software as in a sort of bird-watching or with a click to explore the habitat. But the soul of Gerald and the Darwin@home addresses to the boldest, to those who want to actively participate to the creation of new creatures and the enrichment of the complexity of new platforms. You have all the rules explained.

Another platform possible to visit, or use on the website dedicated to the project, is Sodarace a forum of exchange and discussion of constructors of robots realized through the program Sodacostruction of Ed Burton based on the use of the application of artificial intelligence. The aim is to compare the results of the users and improve the knowledge and the possible developments of the A.I.

As you probably understood, the character of Darwin@Home is amusing and participative, and the project aim to light the serious and technical weight of questions that seem adapt only for experts. This spirit hi haired by the revolutions of big pioneers to a more capillary diffusion of the results of the research, spirit of sharing, research of multysubject.

Darwin@home has a younger character younger than its project mother Biota.org , fundamental knot in the network dedicated to the natural and artificial evolutional research. Biota.org surely deserve a visit. You’ll find the first virtual ecosystem and exposed those fundamental questions that everyone should ask itself. But this is another history.