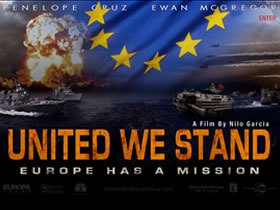 There’s a new movie coming out or maybe not. It’s the European answer to American spy-stories and action movies. It has a captivating title: United We Stand; it is directed from a new talent and interpreted by Ewan Mc Gregor and Penelope Cruz. Are we sure about it? There is a great deal of advertising in specialized magazines and a lot of posters in cities like Barcelona , Berlin and New York . The film has also a web site. But where’s the movie?

The movie doesn’t exist as well as the Nike’s project to customize and rename Nike Plaz a well-known Vienna Plaza and as well as an artist called Darko Maver as well as the www.vaticano.org web site two artists interested in the media dynamics made us believe it and we believed it.

United We Stand is the inexistent movie we’re talking about. It’s the nth project revealing the unreliability of media in an era of real-time communication and real life-video. Through a very professional web site, pay-bills and advertising they have started up a real interest in an unreal object. They have also monitored the “media answer” by putting a series of video cameras near the posters in Barcelona , Berlin and New York to catch people’s reaction. This experiment became an exhibition and we met Eva and Franco Mattes a.k.a. 0100101110101101.ORG in the occasion of the exhibition opening (this was a unique event for an Italian electronic artist) at the New York ‘s Postmasters Gallery .

Monica Ponzini: First of all where did the United We Stand idea come from?

01: we are captivated from pop culture like anyone else and the cinema is now the most popular and recognizable way of communication. We tried to imagine the symbol of Europe in a pop context replacing the American flag with the European one. The result is hallucinating, almost ridiculous. Let’s think of Jasper Johns’ flags and of other classical American symbols like Mount Rushmore . Why American patriotic iconography is commonly accepted while a European one appears ridiculous? Because are we immune to patriotic extremisms or are we victims of an inferiority complex?

Monica Ponzini: How did you build up the project at media level?

01: we worked as we were producers studying a commercial campaign. So urban massive campaign of bill-postering, a web site using the same rhetoric and aesthetics of cinematographic web sites, advertising on specialized magazines and a viral internet campaign through web sites and blogs.

Monica Ponzini: media sabotage is your strong suit: what do you think now about your authentic web fakes like the Nike’s Ground or vaticano.org?

01: There are no fakes but fake attributions. Every news is tendentious. These projects reveal the essence of the spreading of news. Sometimes it’s better to be sincerely false instead of being falsely true. We at some point declare the nature of our projectthe others not always do

In our precedent projects there were a clear distinction from the creation of false news and the consequent revealing. In this project the moment of pretence and the moment of so-called reality happen together: the spectator is at the same time a user and a part of the work of art. We leave a lot of open questions to the spectator to answer: the European spectator think the movie is a parody of American propaganda, the American one thinks the movie is a parody of Europe .

Monica Ponzini: After “remix” Lev Manovich considers as an important contemporary aesthetics factor even if it’s often brought to the extremes you assert the existence of “sharing”. Is sharing going to be the next distinguishing mark of artistic production?

01: people give too much importance to “instruments”. There’s less “remix” now: there are entire musical genres (like the country or the blues) which are based exclusively on the continuous remixing of existing melodies. The culture itself is plagiarism and re-appropriation, the isolated from the world inspired from the muse genius doesn’t exist, there are people endlessly remixing. Sharing is a part of human culture: human beings have always shared things.

And that’s what we do with our projects: we give up our culture, style and aesthetics to each time adopt someone else’s semblances, the European Union, the Nike, the Vatican we are chameleonic and this has not much to do with new technologies.

Monica Ponzini: you are now concentrated on net art because you consider the net as a fast without intermediaries’ way. Are you going on this way?

01: The United We Stand project is not over yet. As regards the Internet we consider it as a very useful instrument but while our net.work works were especially created for the Net we now work “with every necessary medium”. The important thing is the message; I don’t give a damn about the kind of medium.