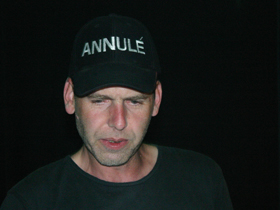 The two things most of the people knows about Thomas Brinkmann: the first is that the artist is one of the brightest musicians in the so called minimal techno scene of the last 20 years, the second one, is that he has always been dar from the worlwide tour, from the huge cache and from the more or less commercial production.

Thomas Brinkmann is the ultimate antistar, expecially in the world of electronic music, always so autocelebrative. He is the typical genius working in the shadows, less known than othersma much more interesting and important for different generations of techno musician.

Also his artistic history is a sort of puzzle, in which every part seems to find its place only in the last years. Against dogmas and discipline ( he loves telling how he was sent away from the art school because of his modern andradical ideas), he was one of the first people that in the 1980s started to work with rythmic lines in electronic music, obtaining new remixes tecnique, thanks to a great tecnical work on instruments and tecnologies, (for example, its dj set with two arms, and doppler effects). Everything together with an amazing style. Only in 1997, Thomas Brinkmann make his attitude a real job, thanks to te remixes for Plasticman and Mike Ink. 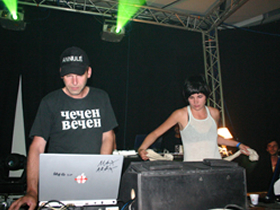 From this moment, Brinkmann’s career had a turning point, both commercial, with his own label, Max Ernst, and artistic, with some works produced under different names (Ersnt, Esther Brinkmann, Soul Center are just the most famous) but always trying to join sound art, sperimentation and dance attitude. Lots of productions, from the ultraminimal and monotone series known for the orange covers and the female names in the title (without forgetting a certain hardness in rhytmic of these songs, everyone 133 bps and 33.333 Rpm as rotation), to the techno-funk exploratrions and the Soul Center, one of the project that shows mr Brinkmann’s talent in using special ambientations for his songs and his rhytmics.

Two works in the recent years bring him to the top: Klick in 2001, the result after years of research and minimal glitch esthetic, and Tokio + 1, more focused on a deeper research about sound. Maybe today, Brinkmann’s career has come to an another turning point , following the new melodic and minimal pop, as it seems in his last albukm Lucky Hands and in his partnership with the Goergian artist TBA. But also in the interview we had in Milan, together with his dog and too much beers… 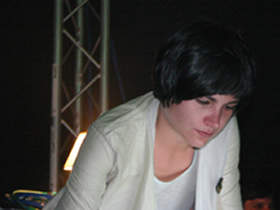 Mk: Thomas, you are considered a kmuscian, tour research about sound and your work have always been well appreciated, as your high quality in music. I saw youmany times on stage, also with TBA, and I’m really curious about this project.. .

Thomas Brinkmann: I have some crossover project with TBA, not much at the moment. She sings in 4 tracks on my new album, but our production are indipendent. We influence each other, comparing our point of view on our work. Playing live, it happened that people started to dance while she was playing her album Amule’. She didn’t know how to aford this situation, so I helped her. She was quite schocked by that atmosphere, so we decided to play our sets together. At the moment, nothing is prepared, but we are still working: now we are moving from a set to the other, and you won’t know which one will be the most powerful…

Mk: You are famous for your remixes tecnique, for creating new sounds, loops, grooves, abd alco you build you own instrument. Are you still enjoing with the digital tecnology?

Thomas Brinkmann: Lots of people call me a dj, but I thin the sperimentation isn’t properly a dj’s thing. So I don’t regard myself as a dj. I’ve always wanted to create music without thinking about the product or its future, both on a record and on stage. You’ll never know if your audience will love it or not. In my opinion, sperimentation is a wind, a creative, full of life wind. 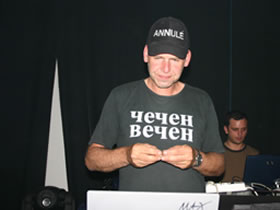 Mk: Do you think that you work can be considered as a bridge between techno music and art / music sperimentation? You, Pole, Mike Ink seemed to join this two aspects..

Thomas Brinkmann: I don’t think I built this bridge. Maybe we are close to, but we have to work day after day, not only once in our careers. I’m happy just because i’ve come so close, as many artists never get. I’ve walked road other never ever imaginated, i’m happy.

Mk: What is the next step in your music or in electronic music in general?

Thomas Brinkmann: The answer is easy: we don’t need other researches, we need a new movement. In 1995-97 there was a new situation, digital instruments were available for everyone, you really could create your own sounds and a real record. Nowadays, it’s happening what happened with the music in the 1970s-1980s, when everithing imploded to create electronic music. I can say that most of the production are boring, we are now used to the same things. I guess something is going to happen. Are we doing ntoday what we want or are we wanting what we do? Unfortunately, the answer is the second one. 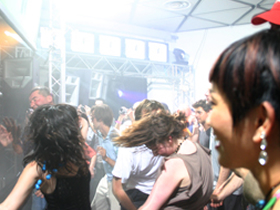 Mk: Have you ever thought about giving your music to some multimedial projects?

Thomas Brinkmann: I’ve worked with some directors, creating soundtracks, but I’ve also worked on projects that joined video/lights and sounds. When you are a musician, you are focused: I’m very interested in everything you can consider as electronic art, but I’m not involved in artistic production in this way. I worked on a 8 speakers, 8 channels art work, together with Markus Schmittel: music was like a rope, something really complex we could move into the room, with engineers and sound engineers. I’ve also another idea: a sound wave into a tunnel, 15 m height and large, where people can walk in. I have some sponsors, expecially in the south of Italy and near Montecassino (Thomas is living in Italy for many years).

Mk: I have a question from a musician friend of mine. You started playing music in the 1980s, but you startedproducing only in 1997. What did you do during this years? How is it possible for an elctronic musician to live with his music?

Thomas Brinkmann: When i started, people told me i was crazy, nobody wanted to work or play with me. I lived in a small town in Germany, where people weren’treally open minded. I left the art school because i couldn’t stand thosa rules. It happened in the late 1990s the situation was different, I was considered famous and i worked a lot, buying instruments,good sound systems, sinth. Later I had my own label. You believe in something and you have to follow your instinct, and my way now it is easier than 20 years ago. 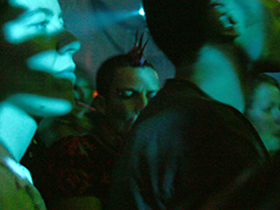 Mk: What are your feelings today like an artists when you’re on stage, when you produce your music or you manage your own label?

Thomas Brinkmann: My feelengs are always different, but I’m always at my ease playing in a club or in a festival. Recently I was at the Interferenze festival, and there were so many problems…We couldn’t find the hotel, no one knew about the festival or the place i was supposed to play. But when i started, there were 700 people dancing, and that was one of the best night ever. This is an amzing feeling, as when i’m in studio, or in my label. There are no rules, just as i want.