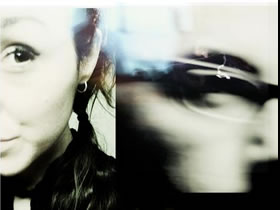 Skoltz_kolgen is a Canadian duo composed of Dominique T. Skoltz and Herman W. Kolgen. Draft of one of the cases in which new media artists share not only artistic life, but also the affective one. In Italy they are known mostly because of their perfect and effective live and their audio-video projects, even if their activity is extended to audio production, experimental movies and graphic. Their aesthetic consciousness, cold without being glacial, and their lucidity in the construction of plans make them one of the most important reality in the global panorama of audio-visual performances. Their super-cool universe are articulated between cellular life, immaterial high-design and flows poetic. Who read the interview to Rechenzantrum in the past number ( Digimag09/nov05 “Nuovo centro di elaborazione dati” ), the sharing of their method “on stage” is not unanimous (and creates some perplexities also in who writes). At the same time, the impact and beauty of what they’re doing is unbelievable. As well as we can’t discuss the fact that their qualitative standard are higher than any other experimental electronic performance now available. I have spoken with them about that and about some other themes, discovering that every new project is different from the previous, from the liveness point and for many other aspects. First, despite the appearances, the Skoltz_Kolgen, thanks to their predisposition of writing their own software, are able to work jointly both on the level of the input audio/video random but linked one to each other, both on a bigger live component than what appears from their work Flüux:/Terminal , that made them famous. So a great example of new media artist that work in a real meta level between electronic arts, who know how to work on software as well as on generative art, on audio-visual performances as well as on the delicate relationship between ethic and aesthetic, and last but not least on codes and virtual languages and natural biological environment.

Bertram Niessen: The visual composition of your works is definitely complex. Beyond your multiple influences (glitches, photography, architecture and biology), we can always see a recognizable mark. How do you describe your aesthetical choices?

Skoltz_kolgen: One of the thing that inspired us the most is micro-phenomenon, micro-evolution or micro-transformation of system. Their inner organization, their rules, their contaminations, their slow permutations, their destructions or morphogenesis. This system can be organic or purely synthetic for us. In Fluux:/Terminal, for example, we created wireframe structures that moves their selves. The sound can influence their normal evolution while time goes by. Audio in this case is the stimulating/disturber agent. In Epiderm we created a virtual ambient that has biological references real and audio in this case is the creator of cells. In Ovskii everything is virtual, pure matrix on a PC black and white. Pixels moves thanks to audio dynamic and build patterns and synaptic forms.

In our music we creats instruments able to work to micro-extreme levels in sound. With this type of interface we can work with microstructures of wave forms to create permutations and reorganize their structures. We also develop scripts and randomizer able to inject information, randomization, or precise decision into the sound. In fact it is possible to control every single aspect of the sound and make some rules at the same time that make the interface create the sound.

Talking about the aesthetic, our goal is to eliminate the distances between synthetic and organic. The fusion between these two aspects is very important as we are always searching to combine the systems, that is controlling (with sound, codes, data) controlling our virtual micro-system in combination with typically organic system.

Bertram Niessen: Lot of the artists who work with audio-visual performances give importance to the liveness component. Some others focus more on the construction of environments, considering the liveness as a secondary aspect. What do you think about that? How much liveness is there in your work?

Skoltz_kolgen: It depends from the nature of the project and its goals. Some have the performance as a sharing of a particular environment and emotional state with precision and specific direction. Some other as Askaa have randomness as the creative engine of the performance/installation, even if we always need to put some rules and aesthetical parameters first. We love every project because of its own structure. In Ovskii is difficult to control the matrix in a perfect way, so live everything could happen and this is part of the project.

Another important element is that in some way, we’re slave of the slowness of our computers so we have to compare with this limit, mostly live. Live in Epiderm it is difficult to have the total control on all the genetic cells. But everything changes nowadays, so in our future maybe we’ll be able to do everything live.

Bertram Niessen: Now much is important the programming of the instruments you use? Can you describe some of them?

Skoltz_kolgen: Most of our projects need to work on developing technologies . We don’t care about limits that available software have. If a project need something particular that doesn’t exist, we create it. From this point of view, we have some friends who help us out where our knowledge is not as good as we need. But we develop our interface on our own most of the time.

In Ovskii, our first live project, everything is real time. We created a tool named Loefrek who paint pixel in a black and white matrix. Loefrek has two different interfaces. The first one creates granular sounds live broadcast, the second one is a translator from audio into video. Sound creates visual repercussion on XY matrix and it is possibile to modify or modulate the result through some deformation parameters. At this point, the result is nothing but the combination of audio dynamics added to our aesthetic decisions. This new visual influences our project, as a feedback, and stimulates the way we build new sounds using the first interface of Loefrek. It’s a sort of continuum between audio and video, that influence each others. It’s a flexible tool.

Skoltz_kolgen: All our works (performances, installations, movies) contain the idea of relationship between sound and images. When we look at an animation, we always try to hear a possible correlate sound, and vice versa. We feel like creating a natural dialog when we connect sound to images. The intersection of elements let us always propose new ideas and emotions. Only through this mix of medium our expression is polarized and directed. In “Flüux:/Terminal” there are some strong connections between sound and images, and that’s the reason why it’s an intense movie both from the physic and psychological point of view. But on the other side in Silent Room this relationship is interpreted in a more metaphorical way: we abandoned the narration starting from characters to let the music do the talking.

Bertram Niessen: Can you say something about your way of working to conclude this interview? How does the project is devised and realized?

Skoltz_kolgen: First we have a brainstorming session about the main concept, until the focus becomes clear and excite both. At this point, we discuss about how this specific work differ from its predecessor, what’s the connection, what we need to head on with the concept. It seems a coercive process, but it’s something natural, that happens while we’re having breakfast, or during a stroll in the park, when we drink good wine (or a spritz). Our life is a cocktail and the border between life and creativity is weak and fine. This rhythm and this dynamics run our projects, in a sort of continuum.