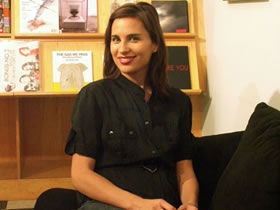 Rachel Greene has been for a decade executive of Rhizome, a well-known new media art platform affiliated to the New Museum of Contemporary Art of New York . She left office to Lauren Cornell, but she still is the coordinator of expositions made by the same organization. In 2004 her first book “Internet Art” has been published.

Contagious Media , her last expo as executive, was a monography about Peretti brothers. Both artists with a predominating attention about social dynamic, Jonah is the leader of Eyebeam Contagious Media group while Chelsea is the performer. Jonah has defined as contagious the practice through the massmedia, after verifying that his request to Nike to produce shoes named Sweatshop has had a global diffusion at the point that all magazines from all around the world published the news.

The work on which the exhibition most focused on was BlackPeopleLoveUs.com, a website were Sally and Johnny, an imaginary Caucasian-white couple, insert and ask for textual and photographical contributions about friendship with black people. The exhibition didn’t treat only the Internet, but all the network and net. For example Rejection Line consists in a telephon number that every women can use to show her refusal to someone who tried to pick her up. The women can leave that number to unwanted people. A recorded message will answer saying that “The person who gave you this number does not want to talk to you or see you again. We would like to take this opportunity to officially reject you”. More than a million people since 2002 used that number. If you need it: 212- 479-7990.

Mariarita Silvestri: Rhizome is the largest database and one of the most well-known network of media art. Are you working to create a real new media art market in the world? If yes, in which way?

Rachel Greene: I think that Rhizome may help the creation of a market, first because it creates a critical and social contest to media art and its diffusion in the world. We’re actually working with sellers and other sort of istitutions who deal with art. This way, we can create a real market where buy and sell are possible and true

Mariarita Silvestri: What is the relation between Rhizome and New Museum in New York ?

Rachel Greene: Rhizome is an affiliate of New Museum that is a separated organization with its own foundraising. We have free offices but pay for other services, as administration and foundraising that are high quality ones. It’s a great situation.

Mariarita Silvestri: What are the Rhizome plans for the future?

Rachel Greene: Rhizome will turn 10 next year, therefore a lot of new interesting programs will be inaugurated. We’ll celebrate our tenth anniversary of activity 10 year after the birth of the new media art. It will be a work that use the Art Base archive as starting pont. Moreover, you surely have already noticed that we’ve restructured the membership and make the access to the archive free.

Mariarita Silvestri: Talking about Contagious Media exhibition, how was the public feedback?

Rachel Greene: I didn’t get a feedback from the public. But it was an interesting show because we used actors that absorbed directly our visitors. For example some black actors went to people that was looking at “BlakcPeopleLoveUs.com” asking their opinion. We did this because if someone is looking to a work about interracial difficulties they will react in a different way if a coloured people is standing near them.

We also had women, models and actresses, that played the performance of the Rejection Line, invented by Jonah and Chelsea Peretti to give women the chance to react to exaggerated and annoying flirts. So we hired these beautiful women whose work was to be kind, talk with everyone, look to every man and give them the Rejection Line number. It was a show about social dynamics, not about objects, and that’s the reason why we thought it was fundamental to activate this kind of works.

Mariarita Silvestri: What is your relation with Europe? Have you ever been the coordinator of a show over there?

Rachel Greene: No, but i’d like to. I do not come to Europe to follow media art for a long time because of personal reason. I’m married and I have a family. It’s not so easy to wake up and go abroad as I was used to when I was young. But I love Europe and I’m deeply interested in knowing what artists are doing everywhere. So, I hope to come back as soon as I can.

Mariarita Silvestri: Can you explain what Art is for you?

Rachel Greene: Art can be lots of things. To me art has different meanings. Talking about new media, art offers the opportunity of change, intervention, criticism or celebration. But I’m interested in traditional art as well, painting, portrait, historical art. I think that art can be a social contest for people. For example, I organized a show about Heath Bunting, a real artist, to whom institution such as the New Museum are interested, even if he’s not famous and doesn’t possess a gallery. It’s the type of work and intervention that an artist does and easily understandable by art institution.

Mariarita Silvestri: Rachel, what does the future propose you?

Rachel Greene: At the moment I left Rhizome, but into good hands. There’s a new director that works in a great manner, Lauren Cornell. She’s been involved in Rhizome for a few months after managing a little organization in New York called Ocularis, important for some video screening, and she also cured a show at ICA of London. So she took my place and I take some time to head on with some personal projects. I’d like to go on doing projects at the New Museum and i’m also interested in working in television, the other huge pubblic space pubblic apart from Internet.