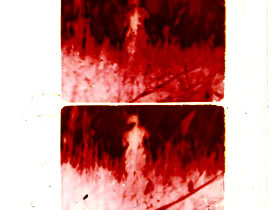 The second edition of Live!iXem 2005 took place in Mestre-Venice at the Candiani’s Centre from 9 to 11 December 2005. The contest-festival is aimed at analyzing the Italian realities involved in sound and interdisciplinary experimentations. This year’s judges were well known foreign artists who have also performed together with the authors of the selected projects. Judges have in common a deep experience and knowledge on the relationships between sound and images, among them there were Xavier Querrel the cineaste and sound experimenter of Cellule de Intervention Metamkine (review guests).

This was the right context for Metamkine because they have been exploring the relationships between sound and images on live performance for more than a decade. The Cellule is a structure with a changeable geometry, which is formed by musicians and cineaste. From 1987 they have been presenting their work at various festivals, art galleries and independent spaces in French, Europe, Canada , USA and Japan ; they collaborate with groups coming from different part of the world. During their live performances through reflecting mirrors, multi projections and an ingenious displacement Metamkine produce a new film by reversing spirals of drawings and improvised photos live accompanied by an audio trace made up of tape fragments and old synthesizer sounds. The group is formed by Jérome Noetinger (electro acoustic devices), Christophe Auger e Xavier Querél (images elaboration). They have been working together for ten years and they have brought film and audio trace in the live exhibition reign. Their performances have a strong deep-down impact; their only materials are film and sound; musicians and cineastes are on the stage in front of the audience and two mirrors set up in the hall reflect images on a screen behind them. Sound and images are real time elaborated; cinema for the eyes and music for the ears. .

I asked Xavier Querrel his opinion on this Live!Ixem edition selected works as he were part of the audience.

Xavier Querrel: There’s surely a certain homogeneity among these seven selected works. They are works of good workmanship. Looking back at them I notice they could have something in common: they recall me sculpture. They made different “materials” (sound, time, space and mass) malleable. Some of them are hand made, like artists were bakers kneading the bread. Some of them are engraved, chiselled by means of precise instruments. Some of these projects were created eliminating, subtracting, cutting and suppressing the material to define/create/make up an imaginary block and give it a form. Some others were created to aggregate: they created and collected materials to build, to give the work of art a body. Some of them look like architectonical sculptures: different elements were selected placed and arranged in the space. I think these works are also very clean, limpid, as artists wanted to avoid excesses.

Domenico Sciajno: Do you find this cleanness a merit or a limit?

Xavier Querrel: Well, I think sometimes a certain roughness and a dirtier aspect is lacking…

Domenico Sciajno: Maybe now the person talking is the Xavier-artist who’s always looking for sonorous images that reveal themselves among ripples in the gesture-mechanical “concreteness” of instrumentation and “analogical” procedures.

Xavier Querrel: I must admit sounds and images worked out through numerical media often seem to me too clean and shining as they were immaterial, as they didn’t have roots sinking in the ground. Ground having a taste, a smell. Ground that can be mud that can spatter

Xavier Querrel: Juxtapositions, staggers of time, but these different strata of time slide and combine. They have a great technical skill and a precise direction. There are different actions/performances and stagger events which are sometimes incongruous but that gave me – the audience  the possibility to invent a story. The sound is essential, it lets images breath

Domenico Sciajno: What do you think about Surface Study #1: Sand by Alessandro Fogar?

Xavier Querrel: It’s a time thread elapsing Fogar made sonorous, tangible, and visible. It becomes sensitive at touch, a little wrinkled. At that moment we imagine its taste. The only thing is lacking is its smell.

Domenico Sciajno: What do you think about X-Scape, which was musically conceived by Martux_m while images were created by Mattia Casalegno from Kinotek?

Xavier Querrel: It’s made up of fine material; the space is sculptured or better delicately chiselled as a lace. This work is made up with surgical precision, it’s a chisel operation.

Xavier Querrel: It’s slow, sensitive composed and infinitesimal. There’s complementary of two different screens and of sounds. Each element lives its own life and it’s at the same time connected with the others. This gives the audience the possibility to every time read elements in a different way. It’s a good poetry that frees itself from abstract images and confronts itself with simple images of nature.

Domenico Sciajno: I Sinistri ++ propose Black Pulse vs White Space, a work exclusively on sound. What do you think about it?

Xavier Querrel: It’s aerial, delicate and bucolic. Sounds are straightforward and simply placed. There’s too much kindness in my opinion. They should add it a little bit of madness.

Xavier Querrel: A music that seems to be freed and at the same time subjugated. It’s like a mass of unstable material shining. Sometimes it becomes tame and it lets you think you could influence its direction but it slips under your fingers. It’s like an ant eater at work.