Do You Remember Our Beloved Commodore 64? 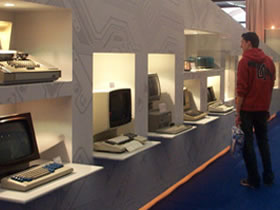 Bit & Bite story, an exhibition path, promoted by Sogei (Società generale di Informatica, General Society of IT) devoted to the story of IT, has just ended at the Accademia dei Lincei of Rome . A view we must meditate on, starting from the first tools of computation up to the history of computerization tout court and to the 30 years of PC, through a true archaeology of hardware up to creative experimentation of the new, though already old, technologies.

The exhibition devotes, in fact, a considerable part of its proposals to the controversial union between art and computer, creating continuity between tools and language rewriting, between technical innovation linearity and the bricolage game made by artists researching a new use and comprehension of technical devices. An articulated exhibition where techne writes its history, showing retrospectively paths, possibilities, as well as old and new uses. A travel for computers’ lovers, with touching and melancholic moments, as when you are near the beloved Commodore 64 or to the awesome Amiga which, how could we forget about it, in those years paved the way for what would have become a true revolution. It is impossible then not to mention the aura of old cybernetics of first mainframes, evoking the image of a prefigured future, already passed and maybe rewritten at present. But no more nostalgic sentimentalism, let’s talk about the section Art & Computer, the one we are most interested in, inside the entire path devoted to digital art.

In this expositive section you can notice the attempt to sum up, which is absolutely not easy, the large variety of expressive languages by the creative use of technologies. Art & Computer has so been divided into the different conjugations of this binomial, from digital painting represented by Alessandro Gianvenuti at the Interactive Art of Piero Gilardi to genetic art represented by Bianco-Valente .

Here we are some of the mayor subjects on which digital art has built up its debate and its “provocations”, from the issue of identity and of the scattered, multiplied and virtual body in the work of Gianvenuti Altre Forme (2004), to the methods of collective relationships’ experience offered by interactive technologies of Piero Gilardi with its installations Connected Es, Shared Emotion and Biosphere (which emphasis on the possibilities of dialogue, of participation and of ethical entertainment of those new devices), up to the observations about hybridization between natural and artificial represented by the artists Bianco-Valente with their Volatile, a flight of birds simulation.

You can even find a view on net art and on the first web-projects such as Antoni Muntadas, Jenny Holzer, Francis Alys, Vuc Cosic, and Mark Napier. A limited sample, to say the truth, just a blow-up on a part of artistic experimentation of recent years which we hope could help to grow up the thirst of interest in it.

In conclusion, this round-up includes the experimentations of electronic music : from the first programs of digital sequencing to Rob Hubbard, author of the brilliant soundtracks of the first videogames, to Amiga’s trackers and to 1040 Altari, up to the realization of sophisticated soft wares of music sequencing such as Cubase . Of course, there were artists of the level of Wendy Carlos, Brian Eno, Aphex Twin .