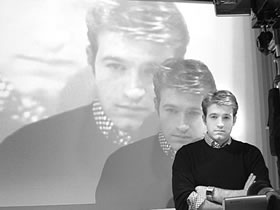 The NewYorker Caden Mason, leader of Big Art Group, famous for his spectacular technological manipulations on stage, has landed at Senigallia, at the Theatre La Fenice with his House of no more, invited by Velia Papa (director of the Inteatro Festival) which attracted a mass of people.

The previous show of Big Art Group , Flicker, was a funny and destructive parody of TV reality shows, live tragedies and chronicles in real time widespread on TV. It was organized like a real time movie, a movie that, while realizing, was already broadcast and on stage. To the 3 cameras corresponded 3 positions and 8 actors controlling “personally” and in turn their own “digital eye” playing meanwhile a character of the story and lending their arms, their head and their chest for the shot of another one. In little words, 3 screens contiguous engendered a single image.

The surprising element of the show was that also with the fix cameras, the machine created by Manson used with ability to create through cardboard profiles the sensation of shooting movements, the succession of shot and reverse shot, tracking shots and close ups. The theatre revealed this way the tricks of cinema and television.

With the new show of House of no more , the elegant and reserved Caden Mason bans media communication. Another real time movie, producing a “funny and subversive” effect. A comment of the New York Post that, in fact, points out what this show really is: a kind and tepid critic to media.

The plot is crime news, true or alleged, about a mother who is looking for her daughter desperately, maybe kidnapped. She too can be guilty for it because of her puzzling split of personality. It seems that this is an event CNN and other US sisters of hers, at the beginning of Iraqi War, tried to emphasize in order to shift the US audience away from the daily images of bombings over the Middle East area.

A sort of detournement cleverly orchestrated by big media about which who knows what communication sociologists, such as John Berger, Régis Debray and Kevin Robins, could have written. Maybe we can take as example the book of Kevin Robins Beyond Image , where the author reflects on imperialism of image, on surreal proliferation and on image treatment during the Gulf War.

Talking about this allusion to war time, Caden Mason could maybe have hit more directly the target. In this sense, House of no more could be the popular and streamlined version of some concepts of Kevin Robins . In the chapter War Visions, there is a paragraph entitled The Infested Screen where the scholar analyses the tight relation between a serial killer murder and the brutal strategy of communication and of “monster construction” at the time of the war against Saddam Hussein.

In the House of no more , the fact of using a camera for each actor, shooting something which won’t have any correspondence to what shown on the screens, proves that the images broadcast by television are not nothing but a composition-manipulation of reality. In comparison to Flicker , he added green screen technology, which makes things more complicated but gives the opportunity to add new and especially “real time” environments thanks to chromakey and to a video digital production switcher controlling the position of the actors, cutting them up Live.

So, if what you watch on the screens tends to have a sort of narrative coherence, what happens on stage is a frenetic and continuous movement of costumes, of change of positions and of gestures and characters doubling. Who looks only at the characters won’t understand anything because the code to interpret is elsewhere – that is to say in the cinematographic rules behind the editing of the movie projected on the screens-. You can find the trick of “choreographic synchrony of actors in movement”, perfect in Flicker , trying to look for the point in which they could become, thanks to the camera, (but only in the composition of image inside the screen) from separated to tight, from far to near.

The trick is between what you can see (what the public of the theatre can see) and the video manipulation, between continuity and discontinuity of image out of the screen. A funny way to recall us, if still we needed it, that the trustiest view on television is the result of a complete invention/deformation of reality. The camera doesn’t shoot but rewrites structures. Any image is then objective, the television makes the fiction reliable.

At the end of the show, there are a series of subtitled claims that should emphasize the political nature of the show: I am the information, I am the media Slogans unable to make the theatrical operation, formally extraordinary, and with undoubtedly great visual impact, a real and serious critics on media, especially in war times.