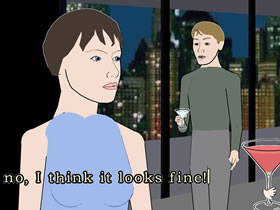 Someone has called it the videogame to come: full interactivity, artificial intelligence, refined language decoding, great technologic complexity. But it is not a proper videogame. It completely disregards the rules the big game industry aims at. It is called Facade and its creators like to define it an interactive drama: long pauses, silences, characters with a complex psychology, no special effects, not a very refined graphic. Scrape, perplexity, embarrassment. Facade stages the difficulties of relationship dynamics and it seems to wink at intimist and psychological theatre by Albee, Tennesse Williams or neo Nobel Prize Harold Pinter. Pretty good! Super technologies at contents disposal! It could be the first experimental video game.

Let’s enter the game, here’s the prelude: you’re at your friends’ house, Trip and Grace, you’re invited for dinner, but in the middle of the conversation a furious altercation breaks out between your two friends. What are you gonna do? The destiny of their love seems to be entrusted to you and you consequently get involved in the game. You don’t have to win anything; you’ve only got to live entering the couple little big drama.

The telling articulates in compliance with your progressive interaction with your two interlocutors governed by a complex A.I. system. You’ll communicate with them through writing ad they will understand you. They’ll answer vocally expressing their feeling through body language and well articulated facial expressions. As in real life you can’t predict what will happen.

Facade is an ambitious project you can download online. It has been realized by the American Andrew Stern and Micheal Mateas (Procedural Art) . But who are they? How could they realize this complex and sophisticated but dramatically simple “genial curio”? We interviewed them to understand it.

Teresa De Feo: for its complexity Façade is manifestly born from the interdisciplinary integration of different practices and it is clearly the result of a team work. What professional figures were involved? Or, better, who is Procedural Art team and its background?

P.A.: Yes, it is. As a matter of fact we can consider Facade as the winning result of the collaboration between game industry and academy. Andrew Stern was the designer and engineering of the 90’s successful characters Dogz, Catz and Babyz produced by PF. Magic . We are talking about the first virtual pets (that preceded Tamagotchi and Nintendogs!) which sold more than two millions copies worldwide. Micheal Mateas is on the contrary an art and A.I. researcher at the Carnegie Mellon University and he has become professor assistant at the Atlanta Georgia Tech where he worked in the Experimental Game Lab . We first projected programmed wrote animated and produced Facade and then we availed ourselves of the collaboration of some actors who gave their voices and of some artistic professional composers in the animation and programming field.

Teresa De Feo: Facade is not a proper video game. Its power is in the credibility of characters, in the natural language, in the singularity of the narrative sequence and above all in the full interactivity that realizes giving the player a 360° experience. All this was possible because of the use of innovative technologies and a new way of conceiving A.I. What are these complex elements and how did you articulate them together?

P.A.: The Facade elaboration process involves three research lines: the project of narrative line deconstruction inside the progressive structure of the story, A.I. engineering for the real time rebuilding of the dramatic performance constituted by the dealings of various parts concerning the player on the spot interaction. Finally there’s the comprehension of how to write in an appealing and useful way in the constantly variable logic of this framework organization. All this  you see  forced us to develop different new programming languages to create our interactive characters and their stories. Facade is born through their ad hoc elaboration.

P.A.: We actually see Facade more as something theatrical then cinematographic  referring to a role model such as the last Star Trek version by Holodeck . In Facade the action is continuous and it is in real time so that the player is personally involved in the building of the dramatization of the story along with the two virtual characters. His presence is fundamental. But we surely think that the same technique could be successfully applied to the cinematographic experience.

Teresa De Feo: What are, in your opinion, the possible evolutions of modern videogame?

P.A.: The nowadays video game development in centralized in details improving: from the elaboration of objects and environments more and more complex to the more and more realistic definition of their characters. But nothing seems to be done to improve the interactive component. And we are afraid the big videogame industry won’t be disposed to face the risks of these experimentations and so it won’t make this future investment.

P.A.: We want to improve the interactive component by introducing new characters and refining the comprehension of the player language, spreading the possibilities of non-linear development of the narration.

Teresa De Feo: Have you got new projects?

P.A.: At the moment we’re very busy at the building of a new Procedural Art studio in Oregon . We are looking for contacts to publicize and find investors for the commercialization of new products based on technologies and on the work we made for Façade. Michael is successfully going on with his research on A.I. possible developments at the Georgia Tech.