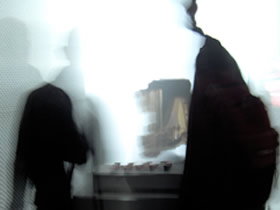 The space of choice of the art choosing new technologies and technology innovation becoming linguistic change is one of the most waited for events of this autumn in Milan : Techne 05 third edition of an international biennial exhibition promoted by the Province of Milan that, from 1999, collects some of the most refined and mature artistic experiences in this field.

The first edition proposed a journey in the video installations world between classic works and last generation experimentations and the second one was centred in interactivity in Italy . 2005 edition is aimed at looking into the relationship between analogical or digital video image and its possibilities “beyond the screen”. It is difficult to consider it a coincidence if we dwell upon the importance of the “visible” in our culture  as this year Philosophy Festival testified; actually this choice  sided with consolidated and often disputable positions  has partly disappointed techno-enthusiastic people.

Here technology isn’t an indiscreet and invasive presence, but it is presented as a consolidated artistic argument. Promoted by Romano Fattorossi, well-known Invideo promoter, in collaboration with the culture section of the Province of Milan, Techné begins  or closes, it depends on the points of view  with a good Studio Azzurro work installed at the entrance: the castaways of the contemporary time press, push, fall, rise again and try again to get over that invisible but impassable border.

Created between two millenniums this work of art still gives food for thought on melting or, better, unceasingly moving and arising borders. But the video installation created by the well-known American artist Bill Viola is the catalyst of the whole gallery. This work of art  strongly wanted by the organization of the event and presented for the first time in Italy  is entitled Ascension . It is an anxious representation of the never ending life and death cycle whose borders seem to dissolve as the air bubbles floating around the suspended and inert body. The installation is lit by a light that recalls Caravaggio’s one. This work of art occupies the place of honour in the gallery and it is plunged in a sort of aquarium that takes the audience breath away giving them the sensation of being dived in the depth of unknown waters.

Mario Canali changes the gallery tune with M.OTU, an interactive installation inspired from the traditional Japanese sport Sumo. Forced to put on the typical position of these stout wrestlers contenders sit one opposite the other with their hands stretched on the game-table which has a monitor in the middle that visualizes the competition area. Contenders, represented by two pawns, study each other to emotionally challenge one another through the heartbeat detection and the skin micro perspiration. The winner is the one who manages to send the other out of the dohyo without losing his temper while a projection on the screen show the public the emotional course of the contest.

It’s an exciting game born from a long research of the artist on machines for the unconscious , which will be part of a retrospective The Arengario in Monza will dedicate to him from 17 March to 14 May. As a matter of fact from this year on in addition to the city Techne absorbs the province in its territory in seven excellent environments: the Spazio Oberdan, five of the foreign cultural centres (the Swiss Cultural Centre, the Austrian Culture Forum, the Cervantes Institute and the Centre Culturel Français), the Pirelli Hangar  which will entertain the Tableau Vivant  Flute Magique by Gabriele Amadori (24, 25, 26 February 2006) and the Monza Arengario. Seven environments for fourteen artists from the two sides of the Atlantic . From well-known artists to new expressions  not too many to tell the truth  from Italy , mainly from Milan and from foreign countries: sixteen works of art like for example Demolition by Luiz Duva , where border is again the main theme. This video installation in fact gives the visitor the possibility to punch a white wall projected on a real wall pushing a series of buttons to the total destruction of the image that let perceive the presence of something else beyond. A work of great force and irony.

The British cineaste Terry Flaxton talks about border too proposing an irreverent virtual banquet with a surprising ending for the patient ones. Phases  an installation by the Milanese group Agon  is animated by a soft and discreet interactivity. There are dancers move at different rhythms according with the closeness of the visitors to the screens. Spoon River by Alessandro Amaducci is completely different. The video maker from Torino tells about hallucinated nightmares full of reminiscences and implications making the characters of Edgar Lee Master anthology talk.

Finally the work of Antonella Bussanich asks young people to explain in a word “the nowadays world”. The result  which is not at all an optimistic one  is a carousel of faces and words led by the word “war”. The catalogue of Techne was made by Antonio Caronia, one of the most attentive researcher of the phenomena concerning new technologies social and cultural impact. There’s a talk over about Techne but maybe it doesn’t show the ideas of the digital era swarming. The meeting cycle The art in the era of digital reproducibility is organized at the Spazio Oberdan by Antonio Caronia, Enrico Livraghi e Simona Pezzano. Next date Monday November the 7 for a rendezvous with Andrea Balzola on “languages and aesthetics of the digital era”.