Retina.it: In The Volcano Hearth 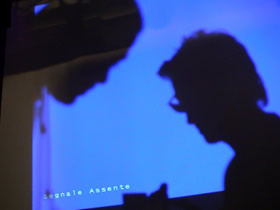 It’s a pleasure to talk about Retina.it, the project of Lino Monaco and Nicola Buono. Born from the collaboration with Rino Cerrone, a well known Neapolitan Dj, the sound of the group has cut down the post new wave elements to create a personal and mature formula. Electronic striking for its ability to create an autonomous path: no European models subjection, composition ability avoiding what has been largely listened, thought and analyzed: neither electro nor glitch, neither media bombing nor ultra-minimal rarefaction.

We like the proposal, exclusively instrumental, while other roster artists as Hefty, Telefon Tel Aviv above all, have introduced the singing with modest results; I’m talking about Map of what is effortless of 2004. Two CDs released: Volcano.waves.1.8 . released in 2001 by Hefty that proposes a floating electronic drift, wisely light and never taken for granted. In 2004 the second CD, simply entitled Retina.it . It stresses the indisputable talent of the two artists from Pompei: a record gathering the insight of their first work. When you listen to it your attention is caught from the first to the last track.

I have to mention, together with some EPs and their participation in some reviews, the creation of a personal label with Marco Messina, Mosikelab which published their first record Resina. When contacted via e-mail Retina.it answered to some questions:

Leo Learchi: How do you consider the electronic scene of your country?

Retina.it: Since we started producing electronic music many things changed. At the beginning of the 90’s there wasn’t a great interest in what we were doing, even if we didn’t have a dance background we managed to propose our music exclusively in techno fields. But some years ago, things have changed and now there are different groups working in our territory, above all in Naples . If only you think about the techno scene which has and continues to have many valid people, you can have a vague idea of how many people, now, decide to express themselves through electronic music. In addition, the festivals, Sintesi in Naples and Interferenze , near Avellino , are the most evident expression of how, even with difficulty, electronic music is meant in our region.

Leo Learchi: How do your songs born?

Retina.it: Our approach to the creation of our music is always the same. We meet every day in our studio and the most of the times we close the tracks within the day. We rarely stop on a track for more than a day. We prefer the tracks to be created from overdubbing, then from writing on sequencer enriching it and rearranging the work up to the details. Once closed the recording of the work, we listen to it some days after, in order to understand if what we recorded keeps the same intensity and feeling features the track was created with.

Leo Learchi: And, as far as the tools are concerned? Analogical, digital or software?

Retina.it: All the 3 processes have always been fundamental in the creation of our tracks. The sampler, an hardware digital tool, is replaced from the growing popularity of a sampling software used on computers. It was the first tool to enter in our studio, with a variety of synthesizers and drum machines, largely analogical cases, collected during the first years of our activity. We have always used software. Back in 1993 we started with an Atari provided with software for Midi sequences. Now, we use many computers both for the realization of audio/Midi sequences and for the process of final recording and editing. Thanks to versatility and easiness in transporting computers, for our lives we adopted the use of a notebook and audio card instead of a 8 tracks and 8 kilos digital recorder.

Our approach is fundamentally analogical, as we prefer working on tracks with an analogical mixer and processing them through outboards, risking compromising the audio with buzzes, instead of staying glued to a screen in a virtual reality with the pretext of having a clear and polished sound.

Retina.it: It would be boring to mention all the groups and artists that conditioned our way of making music, anyway it is right to mention some. John Foxx , leader of the first Ultravox with his Metamatic, record we vividly suggest, Clock Dva of Andi Newton , Colin Newman, Duet Emmo, Dome, Pwong, Coil, Spk, Eno, Vidna Obmana, Raymond Scott, Glass, Riley, Satie, the electronic music of Warp, Bretschneider, with his Flex record dated 97, reference to our sound, Atom and its manifold incarnations etc etc.

Leo Learchi: Any projects for the future?

Retina.it: The future is something you can’t foresee, we can only say we have many new tracks which will have without any doubts a collocation. We gave some times ago a remix to a group of Chicago, Bosco & Jorge . The band for this track collaborated with members of the relief post rock scene of that city. Rob Mazurek, John Herndon and Navin brothers of Aluminum Group the names in the track we remixed.