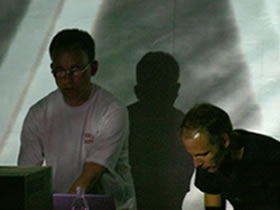 Rechenzentrum, a data processing centre. It’s the best chosen name for an audiovisual electronic experimentation collective, with that Teutonic touch us Italian, and not only us, are so fascinated by. All those who work and are interested in digital art, have learned to know and appreciate this Berlin trio, that from 1997 has made its own way acting as pioneers and watershed between art and electronic music, in such a way that now they are accused of having achieved that sort of creative plateaux with more and more inactivity features or lack of stimulus.

It would be stupid not to admit that the young discipline of audiovisual electronic seems to show more and more its end, in creative terms, in relation to a growing artistic production and to a general technical equalization. Marc Weiser , music and programming, and Lillevan , video and loop, are deeply aware of what is around them, of how they get in short time to the necessity of a turning point, or of a deep artistic awareness, maybe similar to those who pushed them to write that programmatic document of audiovisual integration that has represented a dogma for many young artists during the years.

Without talking too much about their work and their audiovisual aesthetics with so many fans all over the world, perfect and subtle aesthetic minimalism, dada extemporising and live techniques and cut up, I prefer to let them express by their voice and their thought. A conversation which made me understand how, maybe, after many years of activity, the evolution of that Berlin data processing centre is much more than what a simple show could tell.

Marco Mancuso: You are now at Audiovisiva in Milan and in the last years you came many times in Italy . I remember Rome , Pisa , Naples , Palermo and I am forgetting something. What does it mean for you to come in our country to perform live?

Rechenzentrum: We have been invited to perform live in many places in Italy . We have always get on very well with the persons we met, they were open-minded and ready to know elements even culturally innovative, including what now is electronic art. It is certainly true that there isn’t a point of reference, a magazine like yours, an aggregative centre. Meanwhile, we feel that the public and maybe the media too, would be ready for a turning which could approach them to the similar reality of other European countries, even as far as art production is concerned.

Marco Mancuso: You wrote you feel like a true band expressing through audiovisual elements, giving the same importance to the visual and sound elements, kept on the same level, treating music with a visual approach and videos as a music instrument. But how do you translate that concept and this approach live? How is it possible to understand it in your performance?

Rechenzentrum: Well, we wrote a manifesto on what we think about audiovisual electronic experimentation. At the beginning of the 90’s, many clubs started to show with the dj their videos and this happened in festivals too. So, soon we felt the need to write a manifesto of our approach to that work, explaining clearly that it is important for us that music and image should be on the same level, creating a unique event that couldn’t be replayed, as a sort of extemporization in which the visual element is always on the same level than music and rhythm. Without controlling how the public could react, but making it flow naturally. There isn’t an excessive technical element in our work as many believe; there is a human element, a lot of extemporising a great mutual vision of things. When we perform live everyone knows what the others are doing, we extemporise according to what is occurring on stage in that moment and according to our emotions.

Marco Mancuso: So, you extemporise a lot in your work and in your show

Rechenzentrum: The live performance has a strong vagueness component; even if we have many prepared things very complex, with a computer we can choose effects already prepared in studio, mix them in the most appropriate way, changing only some parameters and modifying rhythmic or effects. There isn’t much synchronism between audio and video, we think there isn’t anything more boring than synchronism, it’s like a presentation of a work, there isn’t any live element, and there isn’t any improvisation and humanity in those shows. You just have to listen to a Skoltz Kolgen live to understand what we mean.

Marco Mancuso: Many performances in electronic music are considered very beautiful but very cold exactly for this element of “pre-paration”

Marco Mancuso: I know that sometimes you collaborate with other projects and artists of different fields, like performers, dancers or choreographers. Which is the effective potential of that approach to your work?

Rechenzentrum: Each one of us has always decided to follow other projects, collaborating with other artists and learning from these experiences. I (Mark Weiser) collaborate with some contemporary music ensemble, modifying this way my idea of music, my way of making music become much less industrial and rough than it was in the past. You know, we don’t expect to sell a million copies, we don’t think we could become rich, we haven’t a real label (Mille Plateaux which published their work Direcor’s Cut recently went bankrupt), and so, we rely on our experiences and on what really enrich us. We don’t try to produce something that can sell, the most important thing for us is that we like what we do, and if someone else likes it’s better; each project finishes when an other is beginning.

Marco Mancuso: You are among the few audiovisual artists of a certain level having put on a DVD one of your products. What do you think about the potential market of DVD for audiovisual electronic, does it have any similar potential to the market of electronic music in the future?

Rechenzentrum: Our experience with Mille Plateaux surprised us a lot as we sold all the copies of the first print, anyway our label has failed. We must say that, honestly, we aren’t really interested in following our shows on DVD at home, and I think it is the same for our fans, they prefer to follow the show live feeling the emotions. The DVD market is important to promote you, as our recent projects of Scape, or even of Shitkatapult show, but not to sell your works.

Marco Mancuso: How do you relate with the growing and often frenetic high-tech approach to audio-video digital experimentation?

Rechenzentrum: We must say our research pushes in a direction that is different from the super technological one marking most of modern experimentation, and from the attention of technical research or from synchronic realisation of the work. Our aim, what we really like to do, is a human version of electronic audiovisual. We are interested in choosing the direction in which we want to work in an autonomous way, not the one Sony or Pioneer or big software production societies suggest us. So, even for this reason DVD is a support we don’ like. In ten years all will be different once again, for audio and for video supports, as well as for reproduction supports, without forgetting all we will be able to do downloading the contents on the net and making them available for mobile phones, at growing speed. This way, we risk content overproduction, musicians and video artists will have to be careful as all these supports will need more and more contents, diminishing the importance and the impact of our work. It is important to keep in mind what we are doing as artists.

Marco Mancuso: Don’t you think that for your role of artists is important even an approach to your work for communication beyond an exclusively aesthetic and emotional impact?

Rechenzentrum: As an artist you tend to work on different levels. I (Lillevan) choose the images for different reasons, both because they are beautiful and because they communicate a certain mood. Pure aesthetics isn’t enough, even being abstract, for the reason why “abstract” means to look for the essence of the things. It is the same with sound, it isn’t more difficult and I don’t think it is less direct in comparison to visuals.

Marco Mancuso: I wonder why the most of the artists dealing with electronic music, having a great potential of communication connected to incredible technologies, don’t use it to make social or political speeches in such a potentially direct and explosive way.

Rechenzentrum: It’s an excellent question, with many answers. In South America , for instance, the situation is different; many electronic artists have more attention in this sense. One of the possible reasons is that there are always those sorts of messages everywhere and even if they should have very interesting contents to be emphasized, the risk of being banal is very high. When we were in Istanbul for a live, Usa attacked Iraq , but we thought it was banal to send messages as “Fuck Bush” in that moment. We aren’t politics. Just think about hip pop, born in the American ghettos with precise social and political connotations, now it has become music for rich pimps and black stars and it’s not us to say it, it’s Run Dmc in an interview in an American radio.

Marco Mancuso: But you admit that there aren’t many electronic artists who care for this kind of issues

Rechenzentrum: People with a pc are quite like aliens who aren’t careful or interested in what happens in the world. They are super minimal in their life too. Without considering that propaganda against war is now recognized as a series of good words without any meaning, something that is fashionable and that is necessary in order to feel better. It is obvious to say we are against war, but we know there are many contradictions in making propaganda today; maybe today many artists are disillusioned, they are ready to make a revolution in an other way. Many choices we have made, such as performing in squats in Berlin , in festival with no money, against war, are precise choices. But it is stupid not to think that many operations like last Live Aid are nothing but big commercial operations, not only for Bob Gedolf who had contacts with 20 commercial televisions all over the world, but for the artists who sold million copies more or released new records as Pink Floyd or Madonna. We are not interested in this as the new generation of electronic artists.

Marco Mancuso: There is a growing attention from the institutions and from the world of contemporary classic art for electronic performing and installation art. Which is your approach towards this new tendency?

Rechenzentrum: In fact, artists like Carsten Nicolai broke down the wall because they were artists before that breaking point: they already had a system of art. It doesn’t change much for us to perform in a club or in a museum or in a theatre, for the moment, the most important thing is that new subjects and young people were present in the principal galleries in order to emphasize what digital art is. It’s a problem of generation change. But it doesn’t change much for us, to project works for an occupied house or for a museum is fundamentally the same.