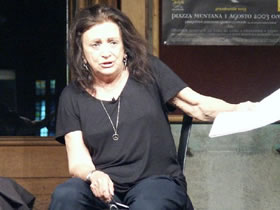 Judith Malina and Hanon Reznikov of the Living Theatre have introduced to the Politeama of Cascina ( Pisa ) the movie Resist! by Dirk Szouszies and Karin Kaper about the history of the revolutionary theatre company. Twenty years after Julian Beck dead.

Julian Beck died in New York the 14 th September 1985 . He was the founder with Judith Malina of the “Living Theatre” group, still alive after fifty years of activity and most famous group of the theatrical neo-avant-garde. His anarchic-pacifist message has turned the world-wide scene upside-down, becoming the cornerstone of the contemporary expressive research. Julian Beck has been one of the most extraordinary creative minds of the twentieth century. Poet and painter, director, actor and stage designer, he has been the cries and the rebellion to the capitalist and warmonger society with his cruel theatre inspired by Artaud, that touched the public sensitivity. Theatre from which you could inquire into the world, “ameliorative” theatre as Beck said, theatre of change and social knowledge. According to some critics, the imposing artistic personality of Beck would be compared to Vasilij Kandinskij, because of his fundamental and revolutionary work of destruction of the traditional artistic form. Here some of the masterpiece by Julian Beck and Judith Malina: The Connection, hyper-realism expressive strength; Antigone, manifesto of the pacifism and disobedience during the sixty-eight; “Mysteries”, the free theatre, and Paradise Now, the revolution on stage.

For all of us that have seen in the Living Theatre the incarnation of a concrete utopia of an ant history, made of bodies and actions that invade people and roads of New York or the factories of Pittsburgh , the memory is a duty. To celebrate the reminiscence of Beck, Judith Malina arrived in Italy with his husband and director of the company Hanon Reznikov for a short tour. At the Politeama of Cascina they presented “Resist!” a passionate movie shot digital and turned into 35 mm from an ex-member of the company, Dirk Szouszies (This event was edited by Politeama, the University of Pisa and the Students Forum of the Scuola Normale Superiore of Pisa ).

Since April 2000 Szouszies has followed them in several parts of the world while the group was staging a musical version of Paradise Now in the United States and while their last show Resistence was played to bring an optimistic anti-violent message in Lebanese and Genoa , during the Anti-G8. These are the two moments on which Dirk Szousies focused his attention, demonstrating both the power of breaking and going on, conceptual and ideal, of the job of the Living Theatre, in perfect coherence with the idea of Malina and Beck of a theatre “presence in the world” and “interminable process”. And through the “actions” on the way: from the cycle of The inheritance of Caino to Not in my name, natural filiations of “Antigone” and Frankenstein, which already foresaw the escape from the theatrical-cultural bourgeois structure.

The movie restore with great effectiveness the strength, the engagement and the resistance of the group to a “frankensteinian” world (and artistic system), bringing us into the crucial moments of their existence and in the places where Living lives today: the New York of Ground Zero and Rocchetta Ligure, where Judith Malina and Hanon Reznikov debate and plan the next work about Revolution, as Malina said, with the new generation of actors from the company.

Judith Malina greeted the large audience reading some of her poems from her recent collection Love and Politics. She touched the crowd telling her dream to open a new theatre in Manhattan at the age of eighty.