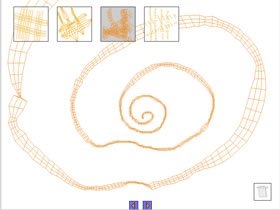 “When we leave a first mark/the page is no longer empty/the symmetry is broken/ and the drawing starts to live”. This is the incipit of Mobility Agents. A Computational Sketchbook , by John F. Simon, Jr ., which has just been published in a fancy CD-ROM+booklet by Printed Matter Inc. in collaboration with the Whitney Museum of American Art (it now features on the last Gate Page of Artport, the Whitney’s online gallery).

As the subtitle suggests, it is a sketchbook, but “computational” i.e. it is not a simple sequence of notes and drawings like Pedagogisches SkizzenBuch published by Paul Klee in 1925 (that Mobility Agents explicitly compliments). It is not only an album you can read, it is also an album to fill; it is not a set of drawings, it is a set of software to draw. Mobility Agents is written in Java and collects three drawing tools developed in three different varieties: Hatch Tool, Rake Tool and Spin Tool .

Simon’s reflection concentrates on the fundamental elements of the drawing (i.e. point line and surface) and on the capacity of the software to automate a series of complex processes which are implicit in the activity of a designer. This means that in Mobility Agents we won’t find the common tools and effects of the other graphic programs  which are usually photorealistic-oriented  but we won’t also find its controversial overthrow (Like Auto-Illustrator ).

Simone confines himself to conferring various options of complexity to the simple operation of tracing a line: a series of limited options that gives however almost unlimited possibilities of experimentation and combination. For instance, the Hatch Tool visualizes in different ways  through lines intersecting the principal line  the hand gesture speed and direction; the Rake Tool makes the traced line multiple then it intervenes on this sheaf of lines with various parameters; in the Spin Tool the drawing tool is not a simple point, but a short pole that revolves on its axis. However, this description doesn’t show all the complexity of John Simon’s project.

Mobility Agent is in fact far from simply being a tool for budding designers. First of all it’s a grief-stricken homage to Paul Klee , whose work is considered by Simon as an archive of potentialities that was only waiting to be activated in a flowing environment. Simon is in a sense the last heir of the Bauhaus tradition and Mobility Agents goes in addiction with The Art of Colour by Itten , Kandinsky ‘s and Klee ‘s texts and Albers ‘ and Moholinagy ‘s notes.

Simon created a drawing board he used to realize his works and that is now available for his public. This drawing board is a drawing tool, but above all it’s a Software Art work, the result of a twenty years reflection on drawing and software, an exercise of creative writing (in the sense of writing that creates, which has the incredible “power to do what it says”). Finally it’s an extraordinary log that accompanies us through the all John Simon’s journey and through his twenty years of experimentations with the software.

This journey, started in 1989, registered the passage from the software at figuration (and repetition of old processes) disposal to the code as an object of research and heart of the work; From Every Icon  a masterpiece of depersonalization and automation, a work that should register every implicit figurative possibilities in a grid of 32×32 squares and that turns into a process that almost touches eternity without giving back to us the satisfaction of a legible image  to the revelation that the creative work of an artist issues from the choices he made inside this “catalogue of possibilities”; from the print that fix the dynamism of the process in the immobility of the drawing to the screen sculptures of late ’90s that keeps this dynamism alive; from interactivity to the contemplation of a dynamic but ended process.

In other words, Mobility Agents lays out the history of recent experimentation with media through the emblematic vicissitudes of one of its absolute protagonists. A history made of enthusiasm, jumps, discoveries and disappointments but above all a history of experiments. First try and then trust.