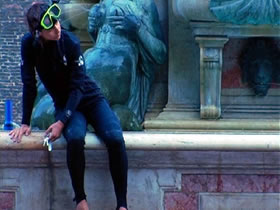 «I’m not interested in creating excellent, beautiful, new, marvellous “art objects”, but I am in proposing time and sense: different ways to listen to time, different places where share time, exercises to train senses or ways to find our own sense. I have the great privilege to work in the field of art: I have the right of free expression and attention. All my thoughts and fears, my tension, sensitivity and intuition, my energy are related with my activity. It is like living a double quantity of life in the middle of a community».

In these few lines the video director and performer Anna de Manincor expresses a clear concept, though hard to absorb and digest in a while: time and sense are key words of everyday life, but they can also come into conflict with each other. Time and sense live in the same habitat, in the same soul, until our artistic activity put us in front of a possibility: our alter ego, predisposed to be open and agreeable to our double life, that is a time in which other senses are dominant.

The artistic activity of the collective from Bologna , that count Anna Rispoli (theatrical director and performer) and Massimo Carozzi (sound designer) between its members, bring us out of the present, as time wouldn’t have an absolute shape of expression and measurement. We find a match with this statement in the penultimate installation Panorama_Bologna at the MAN, the Art Museum of Nuoro . The installation, created inside the collective video art Modern Times by the critical Maria Rosa Sossai, uses time as a sort of Big Brother so that Bologna is photographed in its everyday life.

The video it’s an only and non-stop 360° panoramic around which light and time slide fast. Instead, some people in the foreground seem to last, leaving a defined trace of their passage, until they multiply at the same present and shared time. The set lasts 12 hours. Citizens and tourists are explicitly asked to pass and stop as long as they can in Neptune’s Square, where the video camera-clock hand flow without interruption, recording and painting every face and every movement.

Time flow can be perceived in completely different ways by people that coexist in the same moment. In Neptune ‘s square Time proceeds in two different manners and two cameras record two presents that differ in speed and density. This work represents an immaterial dimension, the thoughts and imagination one. Time is not a sequence of chronological intervals and the public does not observe its true experience, rather something visionary, similar to a mental process.

The more time you use or waste- in front of the lens, the more you leave clues of you (if you are able to stand still for a long time), because the extension of recording time become intensity through its acceleration during the editing. Therefore Panorama_Bologna materializes the wish to engrave our own piece of time, making it intense and dense, as death would never come. So time that flies, frail humanity, wide present and multiplied senses.

ZimmerFrei will be in charge of a productive seat in Germany during the month of November, working between Berlin and Frankfurt . The German première of the “Quando” performance will be in Berlin next Thursday 3 rd and Friday 4 th November, during the Italian theatre exhibition Italienisher Theaterherbst in Berlin on the premises of Sophiensæle. It then lead to Festival plateaux – new positions in international performing arts in “Künstlerhaus Mousonturm – Studio und Cristallobar” Thursday 12 th and Friday 13 th November.

This performance realizes one of our deepest dream as well: get into a parallel dimension where, at the same time, our bodies have different lives and destinies. It is set in different rooms next to each other (free room, as the translation of Zimmer Frei says), where the three performers double, so that they can be seen in more spaces. Their presence is also multiplied by the projection of life-size slides, which anticipate actions just a little while, even if they let the real people multiplication happen. For this purpose the collective has organized a casting and a laboratory in Germany to find their double (as they did in Bologna , Rome , Genoa and Brussels ). Doing this, they can exploit the possibility of visibility and illusionism of the architectural spaces, trying to know each other as much as they can, moving almost identically although keeping their different life paths, intentions and destinies.

“People often say they remember a past life. I say I remember a different, deeply different present life”. From this sentence by the science fiction writer Philip Dick  supported by the scientific hypothesis by Stephen Hawking and Paul Davies – rise the fascinating performance of the Bologna collective that investigates about semi-real world, populated by twins, inhabitants that reproduce their selves hoping to remain. The memories are not about the past, rather about another present, a parallel one. Sounds, bodies, projections create splitting, overlapping, persistence and shifting of figures, a continuous fork of paths, that produce effects of suggestive scenic ambiguity.

Therefore “Wann? Wenn” it is a part of the cycle of performances that investigate the Time and its contiguous plans. In the show two various presents cohabit and the interpreters of ZimmerFrei are present in flesh and blood in both of them, even if in different and separated lives. The continuous transformation of future in past makes in fact impossible define the present, in which we live. When therefore? How much does the present last? And where does it find itself? We do not know from where we come neither where we are going. It is now that time chases us, but we also lack it. How many lives do we need to live properly? What if we were living also other existences, in other places? Not far away, there are ours other lives, separated from spaces of time. We’re not talking about black antimatter holes, but white corridors between parallels lives or small episodes of negentrophia in which the stasis or the temporal inversion are possible.

The performance lands in Germany , continuing its search of the double, of the “doppelganger”, of the alter ego. This way, the vectorial conception of history come to a crisis, and Time becomes a zone.