Generative X, Between Art And Code 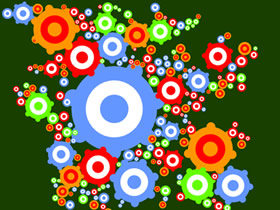 Marius Watz , active as an artist since the early ’90s, has recently organized Generative X, a meeting of conferences and exhibitions centred in computational design, which took place in Oslo at the end of September.

This is a very important event because it’s the first to be centred in this ambit and it boasts of the presence of some of the most important names on the computational field like for example Casey Reas, Ben Fry, Martin Wattenberg, Golan Levin . The festival theme is also very interesting because it raises a fundamental question: what’s the software and art and design generative strategies actual role? The festival is like a framework in which we can distinguish some essential ambits, i.e. generative aesthetics , designing processes , performative software and software by creatives for creatives .

In particular there are two principal sections called ‘ Code as Material’ and ‘Code as Method‘ . The first section is dedicated to artists using the code as a primary expressive form that conceived and developed algorithms to obtain a very personal expression in the result. The second section is dedicated to artists that have in a way conceptually theorized the generative practice or that have conceived software for artists.

Waltz released an interview where he talked about his point of view  which I agree with  that partly responds to the question. In general the Generative Art is seen as a stylistic current of tendentially abstract images production.

As a matter of fact it’s better to imagine it as a strategy for an artistic practice, a way of thinking and acting to conceive and realise an artistic work. This opinion is also confirmed by the activity of pre-computer era pioneers because even if there’s no affinity in a stylistic and formal way their productive process is similar. Another interesting aspect is the separation between generative art and software art works and artists.

Actually the border is sometimes very ephemeral and very often artists who are concerned with software art are also interested in generative art. But there are some conceptual differences in the framework, in the starting spur, in the philosophy. In software art political and social matters very often represent the incitement to conceive a work full of irony, demagogy and satire. We must underline that most of software art artists are part of the Open Source movement, which is notably politically and socially lined up.

On the other hand generative art artists are mainly focalized on aesthetic and formal system where software is simply a tool to create the work. In some way the software art emulates, desecrates and plays with the roles of the system we live in while generative art is a little bit out of our world as regards social responsibility. They direct on a formal and aesthetic research of the work of art, which wouldn’t be possible to obtain by means of the code only.

So Generator X marks a fundamental full stop in the biography of generative and software art. It is clear the time has come to strike in the commercial context to give the possibility to the best artists to experiment because the organs which should spread and incentive innovative culture clearly don’t care. Not to say a word about art dealers system.