Wefab: Digital Fabrication In The Heart Of Milan 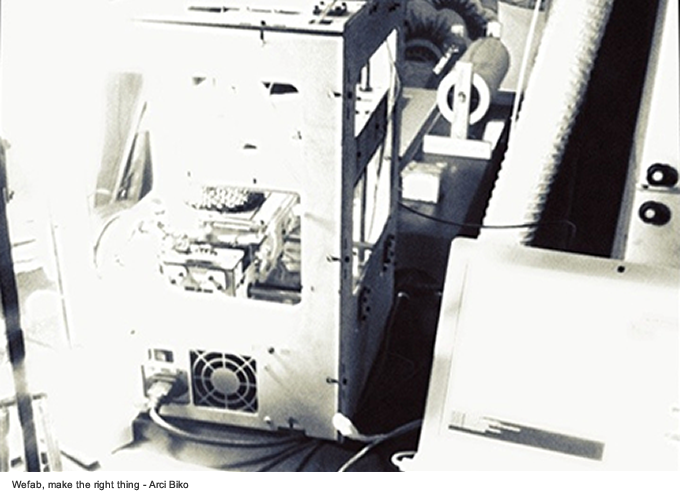 If you are looking to make the revolution, maybe it is worth a trial. Or, better to say, a prototype, for it is design we are talking about. To the shouts of “Make the right thing”, WeFab exhibition has taken place in Milan, between April 14 and 16 of 2011 (http://www.wefab.it/). Three days entirely dedicated to open design, open source design and fabbing, the “home-made” fabrication: activities generating a short circuit in the relations between designer’s creative act, prototyping and industrial production.

WeFab has demonstrated how very different steps of production cycle can collapse to a unique time and place. A time and place that accept the burden of discussing about some century of our history, from the Industrial Revolution on.

Just to give an example: a challenge was scheduled among designers, who in one night had to turn an idea into an object. The news is we are not talking about a huge Chinese factory, but a small cultural circle in Milan. Can it be real?

Put together about twenty designers, provide them with all the material to indulge themselves (plastics, woods, metals, fabric) and, above all, cheap and easy to handle machines in order to directly fabricate the objects. Before midnight your object is ready for use and replicable, as if come out of an industry. 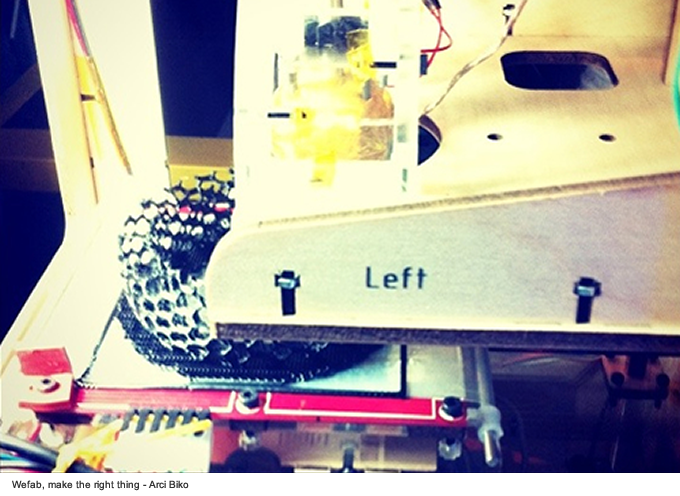 The first Milanese fablab, though temporary, has been organized within the comfortable and colourful hall of Arci Biko circle. The concept comes from hacklab: the intent is to broaden the collective experimentation field on information technology characterizing the hacker universe on object production. Experiences like these are spreading in the world and a month ago in Turin was born Fablab Italia, the first space entirely consecrated to the makers, or whoever wants to be “inventor for a day” (http://www.fablabitalia.it/?page_id=2).

Thanks to WeFab we could understand how a similar space would work in Milan. The atmosphere was crisp, recreational and absorbing. We lived a moment of pure tinkering. We felt free to experiment, play and conceive new ideas with pioneering spirit. In other words, we had real fun..

The organizers, Openwear (http://www.openwear.org/), group of research on collaborative fashion design, and Vectorealism (http://www.vectorealism.com/ ), a laser cutting service providing the designers with the chance to self-product their project at low prices, gathered around them a set of Milanese and International realities dedicated to DIY, self-production and open source design.

The large number of activities proposed – suitable for all tastes – implied a common context of sustainability, ecology and democratization of specialized knowledge. The show has passed from the scientific field of solar kit workshops for the direct charge of mobile phones, audio systems and projectors, kept by Alekos, to more artistic practices, like the aforementioned challenge among the designers, realized with the support of Design Smash, collaborative design platform. The young winners, for their Plexiglas jointed lamp, have been democratically acclaimed by the public with an old but always functional system, the clap-o-meter.

In the following days, the participants to the workshop by Dorbot Milano (they like to define themselves as “people doing strange things with electricity”) have put their hands on Arduino, one of the first hardware open source platforms, experimenting the potential of electronic prototyping and creating a LED lamp. While the fanatics of the nearby desk were soldering, connecting and moving their first steps towards programming, on a large table some others were creating a 2.0 version of some second-hand skirts.

By following the suggestions of Serpica Naro (the collective meta-brand born in 2005 out of a legendary provocation by the Milanese temporaries during fashion week) the clothes has soon been turned into cool dresses and bags through upcycling, that means recycling with upgrades. In other words, they “made the right thing”. 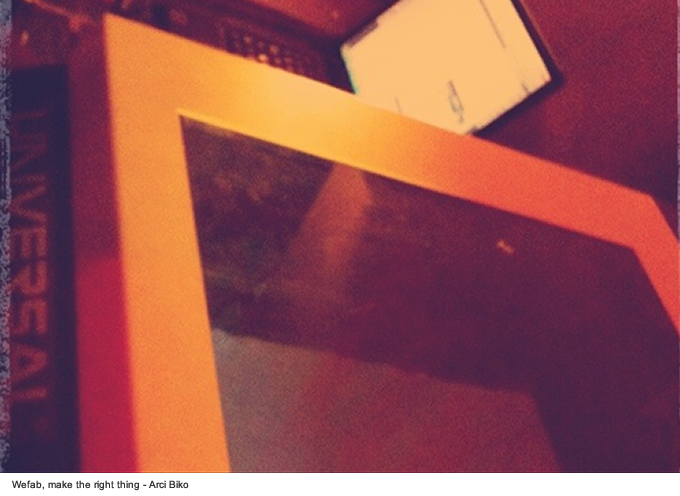 Nevertheless, in order to fully understand the meaning of WeFab‘s mantra, it is necessary to examine the core of the event: the practical demonstration that everybody can really gain access to rapid prototyping. A laser cutter and a 3D printer, working day and night, have been made available to participants and spectators. By starting from vector design, these machines are capable of creating 3D objects that can be assembled to obtain full-fledged products.

The laser allows very accurate cuts and incisions to be made on different range of materials: plastics, cardboard, metal, wood. Yet maybe the real deal, for its low cost, is represented by the MakerBot Thing-O-Matic, an open source printer sold online in an assemblage kit for less than 1300 Dollars. It is capable of creating, for accumulation of plastic material (ABS), objects from vector design with a 3D modelling program. This means we can conceive “ring with moustaches” (one of our favourite works, due to its surrealist-like nature, realized during WeFab), design it, imprint it, and have it in our hands in a few minutes.

Then if we put the design online, maybe with the license to modify it, anyone having a prototyping machine can replicate or improve it, by creating an (almost) identical copy, thus bypassing the step of industrial production, now implied in the personal micro-production. And, even better, the waste of material and energy is reduced.

If this is not Star Trek, we are really close to it. By remembering fabbing’s place of birth, Center for Bits and Atoms of MIT directed by Neil Gershenfeld, a media guru like Chris Anderson has claimed on Wired USA “the new bits are the atoms”. The new practices show how social and economic implications of this veritable digital revolution are able to overcome the web concept and become real.

The key words here are open source, crowdsourcing, or content generated by users: “If during the past ten years we explored the post-insitutional social models in the net, in the next ten years we will apply them to the real world” (C. Anderson, In the Next Industrial Revolution, Atoms are the New Bits, Wired.com , January 25 2010,http://www.wired.com/magazine/2010/01/ff_newrevolution/ t.d.r.). 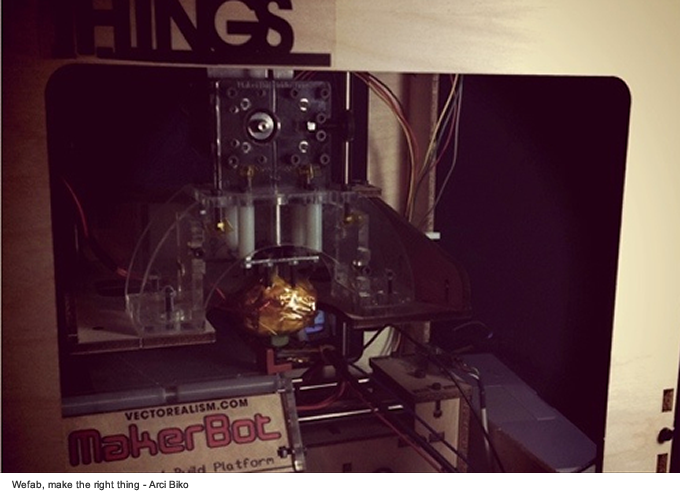 On the relation between material and immaterial, production and concept is based the idea that both software and hardware, (broadly speaking, the “things”) can be created and improved into an environment of free sharing of ideas and procedures. Therefore, to adopt an open source philosophy tout court, from the starting concept of “things” to their fabrication reopens the debate between creativity professionals (designers, artists, writers, inventors, researchers) and producers, the entities investing money in engineering, industrialization, fabrication, publication, distribution of products and so on.

It already happened in the world of media and information, which had to share the audience with any other company who possessed an Internet connection and few simple tools to express itself: forums, social networks, programming languages and flexible and accessible media production means.

Such epochal process deserves an accurate reflection. WeFab’s key value has been on one hand to put to light the astonishing capability of digital democratization, and on the other to reflect on the potential shadow areas. Milan, a “creative city”, as defined by Adam Arvidsson, professor of Sociology of globalization at Università Statale, involved into the project, seems a particularly fitting place to make it. The most important city in Lombardy is not a neutral place where to do these operations, and the choice of the Design Week period is not accidental: even for the fact of being conceived, a project like WeFab contains a critical vision of the economic and productive model working in fashion and design industry, whose Milan is a point of reference.

In a similar context, it is plausible to ask oneself whether the open source model is a double-edged weapon or not for who invests years of study into creative works, after long researches and experiences. Journalist Jeff Howe, on the article famous for giving life to the term “crowdsourcing”, tells the story of a photographer specialized in rare medical images who, after a long career, witnesses his knowledge and economic funds brought into question in a few months by the birth of iStockphoto, an online pictures archive born out of free sharing among professionals and amateurs of the field ((J. Howe, The Rise of Crowdsourcing, in Wired.com, July 2006, http://www.wired.com/wired/archive/14.06/crowds.html).

Let’s go back to Milan. Cristina, a 24 years old brilliant participant of Design Smash, summarize the question. The participants were asked to bring their creation onto the net: “Working to an open project has been so exciting. Contact with other designers is important as well, because you acknowledge your limits, you learn from the others, in other words you become a better designer. It ‘s been no doubt an useful experience for a confrontation, but I am not totally convinced about that idea. A designer does not study and work only to be a number among the others, he aims to emerge.” Yet Cristina confirms most of the time a lot of professionals working for a big label do not receive the prize they deserve, despite their contribution to the creation of successful projects. 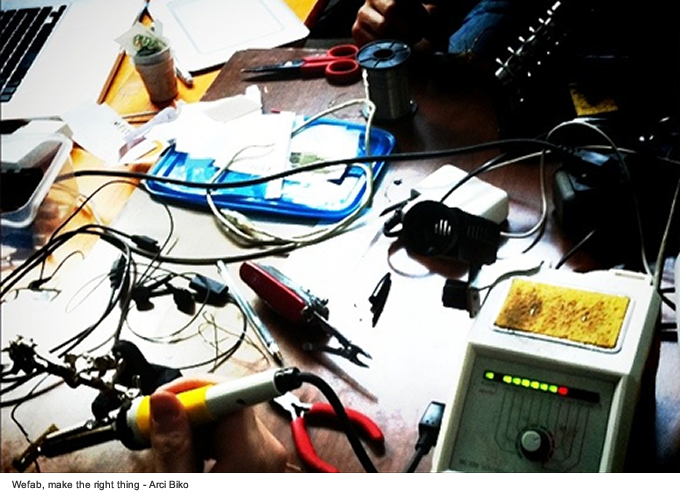 It has been a long time since WeFab organizers are reflecting on the relation between creative work, new technologies and social models. To this purpose, at the Università Statale of Milan the theoretical introduction has been explained with a public workshop, entitled Creative work between precariousness and self-organization, which opened the exhibition and was maybe one of its best moments.

Adam Arvidsson was the moderator, Angela McRobbie, researcher at London’s Goldsmith College, and Bertram Niessen, researcher at Openwear and EduFashion and member of Otolab and memorable author for Digicult were the speakers. During two hours debate, they talked about questions discussed not so many times among the insiders of “creative works”: overabundance of professionals in the field and subsequent fall in value of the work, precariousness as a rule, geographic concentration in “creative cities”, exploitation of the workers’ cultural knowledge, often much complex, by the brand management.

What are the consequences? McRobbie warns against the creation of the “legend” of the cultural effervescence linked to big brands. It is not so difficult to guess a similar ideological concept could end up justifying the marketing machine for its own sake (and not aimed to a real innovation, which no doubt requires to defy the rules). The English researcher intelligently notices a crystallization of the creativity vocabulary, which it looks like it does not have terms to describe the new phenomena.

Yet paradoxically, these same factors of crisis can turn into advantages. The precariousness originated by mass professionalism and easy accessibility to digital means is a tendency which can be seen under other perspectives, as shown by the numerous experiences illustrated by Niessen in an exhaustive overview on “open” design, revealing opportunities for creative workers and companies that use outsourcing by relying on lots of potential collaborators.

New technologies do allow mass creativity, but also production personalization, reversing the traditional concept of industrial fabrication of “things”. It looks like the Gordian knot lies in the dialectic between cultural process and branding control, professionals’ capability to make audience and exploitation of creativity, “old fashioned” industrial production and fantastic digital “return to the future” proposing again the mechanisms of hand-crafted work. 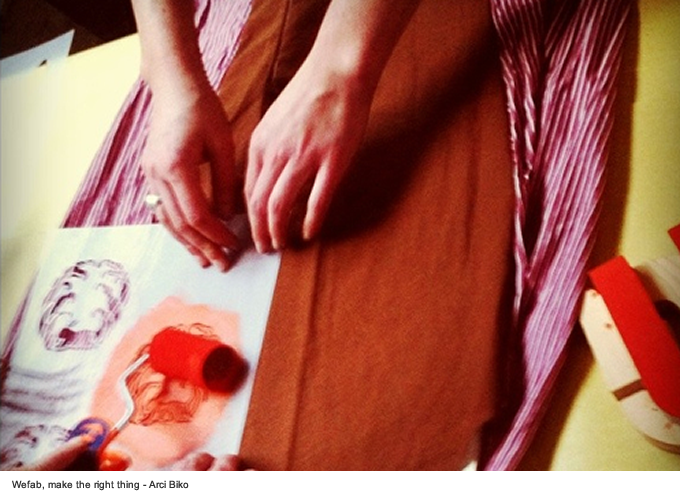 What is going to happen in Milan? “In three days, more than 2000 people visited WeFab. We widen our network and we got in touch with a new public” states Zoe Romano at Openwear, our second author involved in WeFab and indefatigable organizer of the project. “We would like this experience to become a permanent place.

They are talking so much about reutilization in these days. About 200 m2of spacewould be enough for us, and Milan has plenty of it. We would like a place where everyone working in the creative field and without a job could be free to discover new ways and methods. There are so many young people all around. After all, instead of going for some shopping they could go have fun here with us…”