The Contemporary Brazil Pass Through Its Modernity 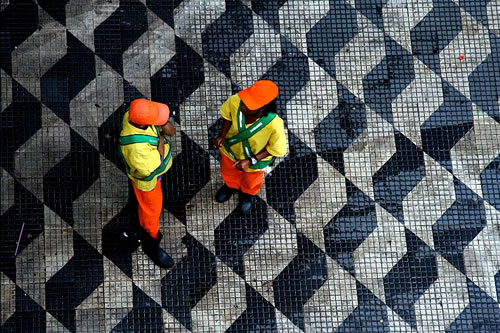 A large exhibition dedicated to the current Brazil, distributed over the three major expositive areas in Rotterdam, ended at the close of last summer. We are talking about Brazil Contemporary, the point of arrival of a demanding research project on the visual, social and architectural culture of this country.

The exhibition was planned to be divided in three main sections: the Nederlands Fotomuseum housed a large part on the Brazilian visual culture of the last decades, concentrating on experimental photography, photojournalism, graphic videos and design. The art museum of the town, the Boijmans Van Beuningen Museum focused instead on visual arts and on contemporary art. The last one, the Nederlands Architectuurinstituut wished to give a survey on the architecture and the town planning of Brazil, dwelling in particular upon the contrasts of San Paolo.

A catalogue published by Nai Publisher follows step by step the vast research that had backed the realization of the expositive project. It is a book rich with images and texts, achieved with a winning graphics that reminds vaguely of tropical colors: its purpose seems to demonstrate that even though in the minds of the average men the word Brazil associates with carnival , Samba, Favelas and tropical forest, Brazil is actually a continent, an apart world, economically and culturally rich where researches and experimentation in the field of visual cultures keep up with exotic images that mass media continue to replicate.

The “Brazil Contemporary” volume (edited by Paul Meurs  formerly editor of other volumes on Brazil and its architectural history in the past years  together with Frits Gierstberg and Jaap Guldemond) begins with an essay entitled Brazil: the Multicultural Mix as Global Brand. This essay tries to make a résume of the key-subjects which have shaped the three exhibitions, each one seen in their own specificity.

Contemporary Brazil is characterized by an incredible economic growth (such, that the British economic newspaper “Financial Times” in 2008 has given Brazil the status of “almost a superpower); by a staunch optimism of its ruling class guided by its president Ignacio Lula da Silva and by certain political and cultural moves in order to underline the presence and importance of the country at international level (from the missions of peace run by UN to the private funding for art and culture). According to the authors this is all part of the current reality of the country together with the soundness won over the years thanks to the folkloristic culture exported in the whole world (from Samba to telenovelas) and to a “high” culture equally sound (from the Biennial of Sao Paulo, established in the ’70s on the same model of Venice, to gigantic personalities as the architect Osca Niemeyer, 102 years old in 2009 and creator of Brasilia).

The starting points called into play in the preparation of the book are interesting: a mixture of pop culture, movies of recent years, analysis of the cultural policies of the country (and of the construction of its institutions related to art), of its artistic and architectural history. And certainly the authors, and as first even Meurs in his essay on the town of San Paolo (Sao Paulo the Metropolis: expansion, contradictions and expansion) aim to outline a picture where hypermodernity and contradictions cohabit in a paroxysm not so much respectful to the majority of the population who, in the metropolis, is overwhelmed by poverty and live on the fringe of society.

Of course, the model of the Brazilian economic growth probably resembles the questionable Chinese model (we have talked about this in another review on The Chinese Dream  L’incubo cinese? N,d.t. The Chinese nightmare?, for Digimag 44, May 2009  http://www.digicult.it/digimag/article.asp?id=1463).

We can certainly say that the exhibition mounted again by Meurs at the Dutch Institute of architecture Roundtrip Sao Paulo, falls more in this theoretical subject of hypermodernity versus social contrasts. In this context, through a series of video-installations and environmental projections, the exhibition shows the visitors the experience of the town of San Paolo: a postmodern town planning research where the analysis of the fabric of the city dweller of the Brazilian metropolis is carried out through the use of different types of audiovisual documentations installed in a single place furnished with typical objects of the daily material culture of the country.

Walking through little pubs with plastic tables, boxes (also made of plastic) of local beer, plastic flip-flops, telephone booths and reconstructions of the typical houses of the favelas, the visitor moves along man-size video projections that reproduce places of the town, actually feeling himself part of that portion of urban space, among passers-by, shop-windows, building doors and homeless. Every now and then, small televisions show some abstracts of documentaries on the three different San Paolo: the town “Diy” (do it yourself, that is self-produced, illegal, spontaneous, marginal); the centre of the town (that similarly to Rotterdam does not exist as real centre but as space containing also old buildings); the “new economy” city.

Interviews to passers-by, homeless, social workers, dwellers of the favelas, long sequences of urban life (central and on the fringe), scenes of everyday life in public spaces: an audiovisual mix, a no-stop flow that has the power to represent the complex and stratified urban reality, even if they linger too much on commonplaces. Plastic and wood, favelas and material culture, pop and colorful, extreme poverty and skyscrapers: San Paolo (together with a lot of other megalopolis in the non-western world) appears in this way to us, observers accustomed to the Disney-like cities of the western world: I wonder whether it is still possible to take our cultural experience as the only judgement criterion.

The two exhibitions in the Fotomuseum and in the Boijmans seems to succeed in being more open toward this theoretical approach, giving shape to an experience where exoticism and social conflicts appear to be put aside so as the less showy aspects of the contemporary culture of the country.

The Boijmans Van Beuningen instead deals with the visual arts of Brazil, linking them again with its modernity and in this way tracing up a path based on the inheritance of a modernism profoundly influential on the Brazilian culture as well as on the international one. The Bòlides by Helio Oiticica are both the starting point and the point of arrival of the exhibition that also houses four artists of the last generations: Rivane Neuenschwander, Cao Guimaraes, Ernesto Neto, Ricardo Basbaum.

These colorful boxes /sculptures, wooden installations made in such a way as to be opened, containing panels and clefts, had been thought and accomplished by the conceptual artist as objects aimed to public spaces with which the visitor (not necessarily an art lover, but the public in the sense of a wider social context) could interact. Thought and accomplished in the 60s, a little before the Penetravels (much larger installations that the visitors can enter) and the famous Parangoles (costumes made of different materials that once donned allowed the visitors to walk around as a mobile sculpture), the Bolides are the essence of the Latin-American conceptualism of the 60s: interactive, social , minimal, made of “poor” objects. A conceptualism not aesthetical but political as also the Paraguayan artist and art critic Luis Camnitzer underlines in his recently published volume Conceptualism in Latin American Art. Didactics of Liberation, in which he insists on the idea that the Latin American conceptualism is not a tropical copy of the original European Northern American one, but the original product of a cultural history and tradition typically Latin, based on the need to communicate in the social space with whatever means is deemed necessary, in order to build up metaphors that could be widely understood and shared but still able to avoid being censored by regimes and dictatorships.

A condition which is common to various countries in the Latin America of the 60s and 70s, perfectly portrayed by Helio Oiticica. His Bolides (which could not be touched in the exhibition in Rotterdam) were nothing more but the deconstruction of the idea of the work of art as something fixed and unintelligible but seen rather as an interactive entity that the visitor, taken by his common life, can carry out, use, rearrange, investigate. An ante litteram interactivity based not on technology but on the use of materials taken from daily life (maybe this is a similitude with the “poor art” but without its aesthetic component), assembled according to simple lines and forms (other link with a chapter from the History of Art  the Minimal  but without its aim concluded in the work of art itself.

Only becoming utterly aware of Helio Oiticica’s thought we can understand the meaning of the work by Ernesto Neto, present at the Boijmans with his very famous Celula Nave. A huge fuchsia cloud in which to plunge, contained by a tangled molecular structure made of nuclei linked to one another. In this work, the visitor enters, lies down, let himself go, goes through an experience of abandonment and displacement in an almost organic structure that rocks him and detaches him from the outward life to reconcile him with the inner one.

In a video (http://www.vimeo.com/5486580) produced by the Boijmans museum, Ernesto Neto shows the concept of work related to the concept of sensuality: – “Sexy is more like a product. Sensuality is about the time, about having more time, about being more slow”, underlining that the interactivity of this sort of molecule with the visitor, welcomed and cuddled in its inside place, is to be found exactly in his capacity of letting himself go into an experience of sensations. The structure, built with a huge pillow filled with polystyrene and a thin elastic and transparent net that support itself (chained up to the ground by counterbalances of sand and raised toward the sky by very simple plastic poles), is the heir of the interactivity by Oiticica even in its simplified form and in the possibility to be adapted to the surroundings, to be deconstructed, transported, changed, carried out, experienced.

The Museum of Photography, finally, houses probably the most complex and dense exhibition out of the three, in which the all-round Brazilian visual culture is shown as an element of self-narration. The video games show us quite an advanced technological reality (as a matter of fact Brazil has been professing for years the open source and the sharing as a model of technological and cultural development). Videos and photographies, graphic and design, fashion and music do not tell us the news or the state of the aesthetic production, but the will to tell the contemporary Brazil out of those stereotypes (commonly from North America or from the western world) that deal with violence, favelas, poor children, samba, beautiful amber-colored dancers, soccer and large beaches.