The Best Of Offf 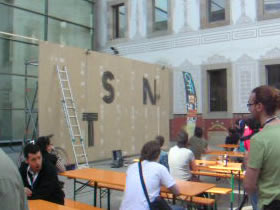 The Barcelona-based OFFF festival presented as usual a series of meetings with the world’s best graphic designers. The artists introduced their works to the audience during meetings, workshops, and projects. This article presents the artists’ best outcomes of this digital kermesse , which offered enthusiasts and professional people a lot of spurs.

Hector  The first thing you noticed entering the festival was a robotic arm spraying on a canvas. Hektor is a Graphics Output Device. It was realized in two months in Summer 2002 by Jürg Lehni and Uli Franke , an electronics engineer from Zurich, for Lehni ‘ s diploma project at the école cantonale d ‘ art de Lausanne (écal). Hektor consists of a suitcase, which contains two electric motors, a spray-can holder, toothed belts, cables, a strong battery and a circuit board, which is connected to a laptop and controls the machine. Through the use of Scriptographer , Hektor is directly controlled from within Adobe Illustrator, the spray-can follows vector graphic paths and sprays them onto the wall. Hektor follows vector paths as the hand follows a line while drawing it. Moreover, with the spray-can Hektor uses a tool that was made to be used by the human hand.

There are almost unlimited drawing possibilities; the drawing process is very long (during the conference a faster Hector second version was presented, which was able to change colour paint by itselfdo you remember Citroën Picasso spot?). This was a captivating experience: a machine using a software developed by men (Illustrator) to guide a robotic arm acting as a writerit’s just a little bit more precise than a human writer.

Folkert/Newstoday  On the second festival day we met Folkert Gorter from Holland who opened with Jason Kristofer Newstoday in 1999, one of the most prestigious online portal of digital culture and design with a creative employment opportunities channel, typographic reviews by WeWorkforThem, a column dedicated to public broadcasts and another one dedicated to broadcast author such as: Amit Pitaru, Joshua Davis, Fluid, G-94, and Yugop.

Folkert is a designer and together with Jason Kristofer, Fluid, Deluxe, crash media, and others created Superfamous Studio an Alliance Network to explore our era new aesthetics and paradigms. Form-Givers concept is particularly interesting because it is not exclusively dedicated to designers. Folkert presented a project on explorations and human technological developments. He wonders why and how humans have not come to get outer space other civilizations yet starting his investigation from the first space explorative voyagers. The project to collect and catalogue information on human culture and history is becoming an open and prolific collaboration.

Hi-Res!&Nanika  Hi-Res are well-known for the works they realized for Massive Attack, Beck, Diesel, Playstation and many others. They appeared in the Res-magazine top-ten list of innovators to follow. At OFFF they presented some of their last works such as the world-wide styleguide for MTV , the virus campaign for Playstation and the Beck’s web site. Florian explained problems and possible solutions to create a common imagination for young people of all over the world that follow MTV, where tastes and trends are not that globalized yet and where rebel teenagers spirit can’t be clustered into a unique sharable imagination. The outcome – after different developments and concepts  was: irony and bizarre amusement where a bad rapper dreams of singing (out-of-tune) famous white chicks’ (Britney Spears for example) songs. Software as Excell/Axel Rose can help you to keep your data under control.

For Playstation portable they created communication from the player point of view. Everything is fitted for persons playing and watching down with their hands applied while they take a bus or walk on streets: so road signs on the ground, ad hoc benches or signals, T-shirts reflecting pad and hands posture. In sum, they ironically laughed at this mania of playing wherever it may be. A metaphor of the changing of world perspective of insatiable and unstoppable players.

Fro Beck an inspiration, built like a mechanical stage set, the site was originally inspired by a Venice theatre. Collages, singer’s shreds, theatrical background, wallpaper textures effectively develop the visionary and kitsch world of the famous singer of “Looser”. Hi-Res! Is now in Barcelona to present the new Nanika project founded by Andreas Müller to explore interaction between man and machine beyond the traditional input/output devices. Andreas declared: “To me this box of electronics in front of me is much like my box of crayons when I was little, or my box of Legos when I was young. The possibilities of this box are just as endless, but getting exactly what you want out of it is very difficult. There’s a lot to learn and explore.”

They presented different kind of interaction and video-tracking and a reel set up starting from these elements. Amusement intended as playful media use conquers and fascinates everyone, even the mom finding herself playing for hours with a digital balls video-camera that reacts to her movements.

Erik Natzke – Erik started working in the late 90s and he has quickly become a well-respected figure in the field of interactive design. Natzke is a desired speaker and presenter for numerous international conferences and he had an integral role in managing and developing interactive works with companies like Handspring, Morgan Stanley, CNET, Skyy Vodka, Mick Jagger, Leo Burnett, and R!OT Manhattan. His works have also garnered numerous awards within the industry, including 3 awards from the FlashForwardFilmFestival in the categories of Experimental, Typographic, and Navigation.

Unfortunately his web site doesn’t show his current works so festivals and conferences are the only way to see them. His presentation theme was the passing of time rapidly changing his productions in things of the past. He thinks it is important to keep yourself interested through your personal research, the development and exploration of continuously changing technology and aesthetics.

Processing / Ben Fry + Casey Reas + Marius Watz – This longed for event took place during the last festival day. It’s interesting to notice creative software development now interest traditional designers: Maeda ‘s offspring has grown up and developed a software, which is now well-known and followed even by curious beginners. This one-week workshop was aimed at solve development problems and it was necessary to present a project to subscribe. If the project was approved Reas, Fry and Watz supported subscribers to perfect it. The works by Fry and Reas have been exposed at international museums such as MOMA and Whitney Museum . Porocessing won the Golden Nica at the Prix Ars Electronica in 2005.

The conference approach is very simple and rational: general Processing environment presentation, its possibilities and future developments and then 2 micro-sessions dedicated to single artists. Reas showed and told about his production based on the artistic drawing generative creation. Fry questions himself on the possible complex data visualization and visual interaction with the user. Next visual Marius Watz ‘s experiments (he defines himself a well known former graphics). Organic forms colour and movement are the main characteristics of his installations and audio-video experiments. Walz also promoted the Generator.x project, a generative strategies agreement between art and design. Generator.x was a conference, an exhibition and a live-concert tour.

Tmema (Zach Lieberman & Golan Levin) – Play the Manual Input Sessions / Drawn / Scrapple – the festival closing is dedicated to two well-known artists collaborating since 2002 to Tmema project. A brief introductive sketch and than a performance that catalysed the audience interest and amused everybody.

There were presented other interesting previous experiments such as “Remark”, “Hidden words”, and “Messa di Voce”. It would be too complicated to describe these projects, it would be easier for you to download projects videos and enjoy them.

Joshua Davis – As usual there were exhibited video-installations by Watz, Reas, and Joshua Davis  testimonial of the festival  who assembled and re-generate visual inputs lefts by visitors directly sketching them on his drawing board creating a collective drawing on a big screen. Every refresh was more precious than the previous as submitted sketches passed by.