Sparkle Labs. The Sparkle Of Creation 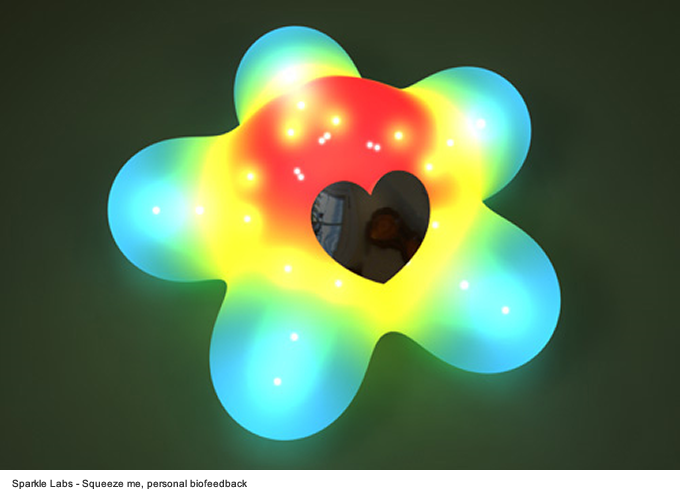 When I need to solve a problem, of one thing I’m sure about: it’s very likely someone else found a solution  before me and she might have left some trails online.

And in any possible topic. Drom the impossible code to disable the answering machine from my mobile, to the grannie’s recipe to cook “focaccia”, going through the tricks to solve Angry Birds‘ fifteenth levels, to the step-by-step instructions to extract human DNA explained by a young scientist in a video on YouTube(http://www.youtube.com/watch?v=pEm1e5wllVk).

Starting from this first casual and accidental explorations, a more complex and world unfolds, animated by users and producers sharing their knowledge online. Some days ago an article on the “New York Times” (http://www.nytimes.com/2011/04/24/business/24novel.html ) highlighted the evolution of this phenomenon in the last years. Web 2.0 tools allowed a considerable step forward compared to the simplistic pattern I-teach-you-how-to. 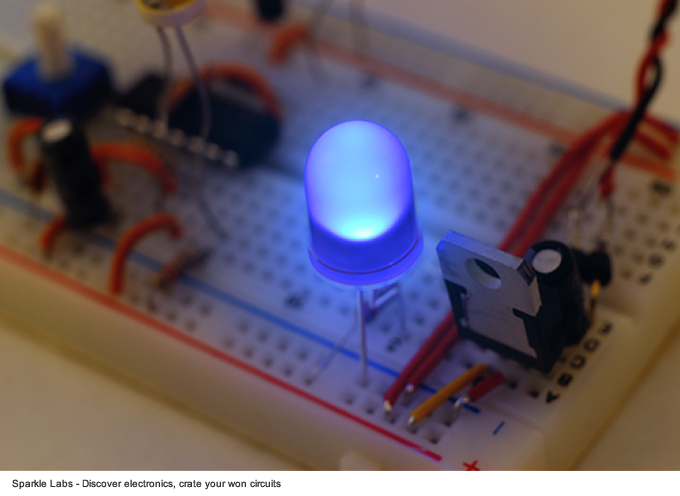 Material and immaterial production, and a community are creating a virtuous triangulation that creates the ground for an economic sustainability of part of the scene. Interactive and video tutorials, explaining how to produce a particular object become even more effective if placed side by side to two other elements: a kit of equipment, (usually not easily found) and a community through which share your experiments and find help.

Dale Dougherty, editor of “Make Magazine” (http://makezine.com/), talks about the rise of a new era in which the lonely tinkerer becomes a social tinkerer sharing her ideas and discoveries with a community where everyone can learn and grow. Beside selling the magazine and books, his company created an online shop http://www.makershed.com/ where people can buy weird objects, stuff and user-friendly kits that make it easier to develop a community allowing much more people to make stuff.

In this scenario new actors are embodying the sharing of knowledge as a full time occupation and thousands of new followers are thrilled by interactive electronics. One of these actors is worth highlighting is called Sparkle Lab, a duo of designer and teacher, Amy Parness e Ariel Churi, based in New York City. Sparkel Lab, born some years ago, is a special mix of art, craft, science and cuteness enabling the disclosure of the little engineers hiding inside all of us. Pastel colors, iced icons make us easily forget we are dealing with circuits, leds, electric threads and suddenly we learn the basis of electronics. 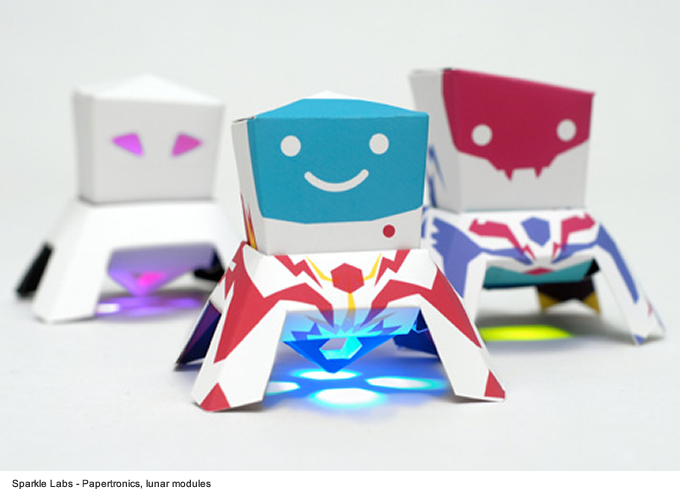 Here’s the questions I asked to them:

Zoe Romano: On one side the maker/DIY movement is expanding and expressing a need to knowing how things work. At the same time the mainstream market is offering objects more and more sealed and not even mendable. Would you see it as the beginning of a peaceful anti-consumeristic revolution toward a more open and sustainable culture?

Sparkle Lab: Yes, maybe one that may never happen. It is a movement of people wanting to be more skilled and have specific things they can do themselves like in the past. The objects today are not good enough and people are disenchanted with their inflexibility and lack of personalization. DIY gives people control. Hopefully, the trend will continue and people will gain skills to create things locally.

Zoe Romano: Do you think open-source hardware and software are going to fuel the DIY movement? Do you make any use of it or are planning to?

Sparkle Lab: L’open-source has proven itself. Many large companies are using OS software. Hopefully we will see OS hardware get bigger as more people begin creating at home. OS allows people to move forward very quickly and probably is the natural order of things. The circuits in our kit are very basic but we may get into OS hardware in the future. 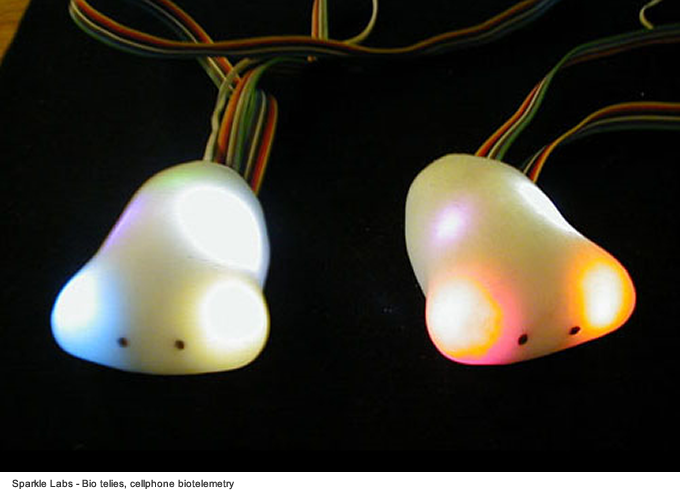 Zoe Romano: Latest statistics in Italy say that having a university degree doesn’t help anymore to find employment as it used to be, and often when you come out of a design school the job being offered are not lighting a spark. It looks like schools and universities are often teaching topics that lost the connections with the transformations of the outside world and the way modes of production are evolving. In a way you invented a job for yourself. How did u come up to “invent” your job?

Sparkle Lab: Very slowly. We are designers and teachers. We did not come from an electronics background but learned it in graduate school and on our own. It seemed so hard when we started and really in some ways unapproachable. Schools these days are overpriced causing people to self train. If you decide to go the self training route, you still need to have some kind of mentoring – being active in a hacker group or mentoring organization (http://it.wikipedia.org/wiki/Mentoring). We thought it would be great to make the entry into this kind of exploration more friendly and create a community which we are doing on learn.sparklelabs.com.

Zoe Romano: In a recent IDSA conference IDSA (http://www.idsa.org/idsa-2010-conference-diy-design) , the debate was around what if the DIY resurgence meant the end of industrial design and a new meaning of “professional”. did you follow the debate? In which way you’d see DIY as a threat for “professional designers”.

Sparkle Lab: It is in many ways a threat to the status quo. This goes back to question one- just as the revolution is changing the industry, the professionals will have to change as well. Professionals are threatened and they need to become more like DIYers. They can make hackable expandable products. On the whole, DIY will be good for the industry. 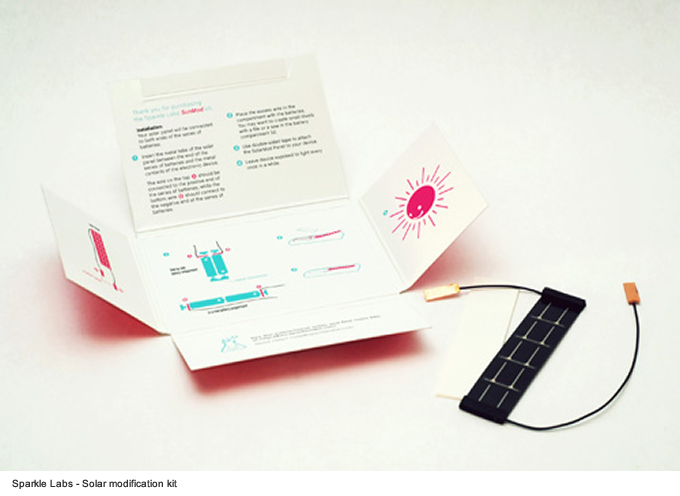 Zoe Romano: What are your plans for the future?

Sparkle Lab: We will continue to do educational projects and try to grow with our customers as they gain new skills. We have a series of expansion packs for the Discover Electronics kit. The kit has become part of an online video class and we are working on creating a bigger online community. We have a series of really cool interactive children’s toys that we are trying to decide what to do with.