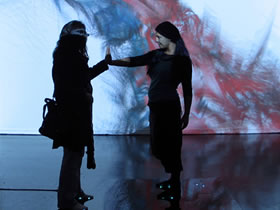 If you are close to me , created in 2006, is requested by many. Festivals, digital art and new media exhibitions try to obtain it, though it is not always easy. Sonia Cillari , the author, says this interactive installation/performance is so unique and complex that its duplication, in order to have it in different places at the same time, is not advisable. A sensitive platform on which the visitors place themselves to become actors, performers and audience of their own actions at the same time. The actions turn into geometric shapes and lines around their bodies and movements and can be seen thanks to the huge projections on the surrounding walls.

The core of If you are close to me and its charm lie in the extreme simplicity and effectiveness of the shape and the freedom the public has to be protagonist and performer of the installation. This is one of the significant experiences Sonia Cillari ‘s activity. Though Italian, she has lived across Europe and her credentials are excellent: she graduated at Architecture Faculty in Naples, specialized in various topics between Rome and Paris, took a Master degree in Digital arts at Barcelona Pompeu Fabra .She was the first foreign interactive artist who was invited to the Rijksakademie in Amsterdam , one of the best known academies in the world.

Her architecture background has been crucial for the development of her projects, as far as the inerpretation of the space and the available tools are concerned. Yet, her production is closer to that of an artist than of an architect. The choices and researches necessary to her works are carried out with technical and scientific rigour but are aiming at more unpredictable and changeable areas such as consciousness and perception.

Sonia says . Thus the body is meant as space-centered, the space it is in is not inactive, but rather a generating core; the relation between space, body and mind is infinite and continuous.

If this is the assumption, what follows is the idea of the body as both object and subject. the artist explains .

The need to communicate and connect to each other is surely the heart of all Cillari ‘s work and research. The study on spatial architectures and the way they are built around the human body and ineract with it is based on the way we build the inside and the outside through our senses and how we are aware of it.

Her latest project is the interactive performance Don’t feel you are alone , which has the shape of a gynoid missing of any kind of memory, empty as a box to fill. That will be an interface which, in two weeks’ time, in different cities, will interact with space and time sorrounding it, till it will be filled up with inputs. From that point on it will provided with a memory which enables it to build and a body to express outputs. The work will be developed in six months. The project is not public yet and it is still being elaborated and looking for sponsors.

The idea behind “Don’t feel you are alone”, fully expresses the concept of body as a subject and a very direct and straight interpretation of interaction: Sonia Cillari is against the idea of interaction as it is meant today. Sonia explains .

By thinking about a piece of art’s meaning and what it communicates in a very radical way, Sonia believe a part of new media art is no longer “personal” since it lost the sense of person completely, developing to its maximum the concept of “user”. As a consequence, Sonia thinks that to overcome that exclusively functional concept technology should be used at a primitive level, as a means of expression and not for its ultimate purpose.

So her pieces of art make us aware and let us develop a critical consciousness. Cillari says .

As a consequence the interaction is perfect in the exchange between what the artist projected and the presence of the person who is enjoying it.The only instruction the visitor gets in front of the platform of If you are close to me is to get on; from that point on his freedom is almost absolute, because the basic point is how the audience gets lost in the work of art and not how the interaction starts.

What she believes does not only refer to new media, but it refers to a wider concept of art. The creative person who think of an interaction and draws it, through the interaction design represent the possible variations people can experience. There is obviously a limitation, but it is based on the fact that here the artist, as the painter with brushes and canvas, needs to use a language and looks for the guiding lines for the audience. If the drawing is good, the sphere will be wide.

Sonia Cillari is extremely clear: no need to talk about technique, though important and precious. Her position is on the border between arts and techniques, architecture and dance, new media and the magic of feeling and participation. She likes this borderline because when she works with tecnology she believes it is important not to lose the human aspect.

Though she prefers museums and galleries to festivals, she will take part at Ars Electronica, where she won the ” Honorable Mention” in the section “Interactive Art”.