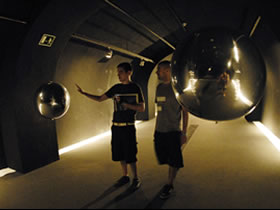 If I should pick a house flag for the multimedia part of the Sonar 2007, I surely choose FEED by Kurt Hentschlager , performance presented for the first time at the Venice Biennale of 2005 that is becoming more and more a classic of the international media art.

Imagine a sort of brain-machine where the entire body enmeshes the material of the representation. A genial realization of the idea of the immersion, based on an amputation of the sight and on a total device that exemplify the best the technological declination of the sublime as show for a new nature. It is not a case that his performances have always been crowded and that during the days of the festival a real buzz about the black cube of SantaMonica invaded Barcelona . Perfect background of this performance is the Black Out Concert by Tres , a silent concert that where progressively the different textures of the everyday soundscape were disarticulated or switched off till the point of total absence of perceptive stimulations.

The everything of FEED and the nothing of the BlackOut Concert. Substantially, two mirror forms of the same thing: the immersion. Though hyper-stimulation the first, through sensorial deprivation the second. Super interesting concept, even because the undressing of the sound made by Tres does not start from music or generated sounds, but from turning off the environment sounds. Understanding the richness and invasive sound of the real default through its progressive disarticulation, it is actually the most exciting moment of the performance. We have to say that the idea has some flaws, most of all the presence of the artist inside the space of the performance, and some technical aspects that could preserve and amplify the magic and efficiency of the performance itself.

After that, there were tons of interesting things to see and the concept of Sonarmatica 2007 , centred on magic and technology relations, made them unforgettable.

“Post-modernity is the synergy of archaic and technologic. Turning the Weberian idea of the technique as disenchant of the world upside down, I say that nowadays technique is the re-enchant of the world”. Maffesoli statement is the perfect counter alter of the Arthur C. Clark one, “Every sufficiently advanced technology is indistinguishable from magic”, that inspired the curator of the Sonarmatica 2007. They both synthesize the double souls of Et Voilà concept.

There actually are two different points of view to read the relation between magic and technology, or if you want the magical nature of technologies. On one side the technology as artificial instrument improves the human abilities, in their interaction with the natural environment and reality, introducing new levels of complexity that necessarily must dissimulate to be used everyday (for example the researches about the “natural” interfaces). A need that produces that sense of magic, the concealment of the “trick” behind the technological device. On the other side, this operation made to dissimulate and “naturalize” gives back the enchant to all those things that science and technology have progressively sectioned, revealed and disenchanted. A double movement of disenchant/re-enchant that produces charm, mystery and astonishment. As phantasmagoria, as marvellous visual effect because inexplicable, introduced in the post-Renaissance Occident that was discovering the wonders of the modern science. Phantasmagoria in point of fact is the first inspiration of the Sonarmatica 2007 concept.

A genial and absolutely guessed concept, that centers a central aspect of our relationship with technology, joined by focus as much guessed as the “immersion” or the “aural society “, that clearly describe the way technology progressively redefined our natural environment. A Sonarmatica in which I entrusted huge expectations, some highly satisfied, some not.

In front of the huge profusion of the different multimedia section of Sonar, that more and more grows every year, turning harder and harder their description, I maybe missed the sense of nervous wonder and enchant of the world that the show wanted to represent. Do not misunderstand me, I saw tons of interesting things, and the program of the year had the merit to approach a public bigger than the media-art one, for example through the beautiful magic performances of artists such as Julien Maire, Wizard Julian/Zachary Lieberman and Nemonico , that added a live dimension to Sonarmatica. The stage area of “Et Voilà” has always been crowded and a vaster public visited the dugout of CCCB with enthusiasm. However, thinking about the expectations, I must say the concept of the show has been more exciting than the realization itself. It missed the sense of magic/mystery/uneasiness that turned into myths some experimental performances of the 18 th Century that inspired “Et Voilà” managers.

As Jorge Luis Marzo says, one of the curator of the show, “magic is based on the idea that the public does not find out the trick. This is the principal secret of its success. If the public would know what’s going on inside the magician hands or would understand it during the performance, the entire show would immediately end”. Well, it happened that during the Sonar show, we got the trick, the magic trick was under our eyes.

I don’t think the limit was in the selection of the presented works, all interesting, Shadow Monsters by Philip Worthington, Tools Life by minim++, Portray the Silhouette by Masaki Fujiata, Delicate Boundaries by Christine Sugrue or AR_Magic System by Diego Diaz and Clara Boj . All of them shared a sense of will to stun and amaze the public because of the unexpected and apparently inexplicable consequences of the human interation with a technological device. I think the concept was as genial as ambitious and unrelizable because the relation we got nowadays with technology is more natural than magical, more ordinary than exceptional, more normal than marvellous.

Nowadays the relation with technology is clearly different. The roots are absolutely magic, but we know have metabolized a level of complexity with no precedents that turned in some way the magic into everyday life (look at how banal a special effect is now!). the more advanced and contemporary mass entertainment key is the aesthetic of the neo-baroque phantasmagoria, a sensation of astonishment and doubt that we’ve been used from the Modernity thanks to the spectacular occidental strategy.

In this sense the installations presented at the Sonarmatica, even if complex and interesting, used technologies and expressive modalities founded on the screen, more or less interactive, that we highly metabolized. Lots of interest, lots of enthusiasm but less astonishment and no transcendence at all! In this sense, I think Sonarmatica presented interesting works, opened new windows on no explored scenes but didn’t reproduce in the public that sense of surprise/shock, because technologic is now natural and no more a dissonant magic introduced in the everyday life.

It is clear that talking after the show is like a fair game with an AK47. Let’s make some hypothesis then. Maybe a concept like that better associated an historical reconnaissance with of our relation with technology, how it was vested with esoterically meanings, to finally exalt the magical root of what is nowadays considered normal. It would have been interesting to tell the history of the magical representation of the technology, from the mystic of mesmerism around electricity during the 16 th century to the techno-agnostic manifestation that Erik Davis describes in his Technosis , to the religious cults developed around the technology tout-court. Well, it wouldn’t have been a media-art show, but during the years the Sonar organizers demonstrated their ability in privileging choices with sense rather than genre cages (see the 2004 show about Micronations for example).

Moreover, as the theme was technology as magic, as a performance dimension has been introduces, it would have had sense introducing an historical-anthropological dimension. My doubt is anyway more general: when magic technology is the one so advanced that produces inside the spectator a sense of inexplicable and unease astonishment, shouldn’t we ask ourselves if in the actual panorama media-art is still the technological avant-garde?

In other words, is it possible that a further spreading of advanced consumer level technologies, most of all in the entertainment ambit, has in some way defused the mesmerizing power of the media art and trivialized the magic, distributing it to everyone? Are we sure that media art is the expressive form that nowadays better express the phantasmagoria of the present and the re-enchant of the world through technique?

Or should we start looking lower, where art is not so familiar?.