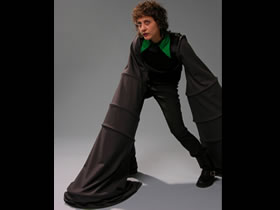 Seamless 2.0 is an annual exhibition dedicated to the integration of fashion and technology promoted by the MIT of Boston. This year the event, in part sponsored by Motorola, has taken the shape of a fashion show in the context of the Science Museum of Boston . The intention: to present experimental work and new ways of imaging the rapport between body and clothes on a psychological, social and esthetical level.

The works presented go from wearable art to the prototypes of laboratory research that illustrate a incessant yearning for artistic and technological experimentation, however, they leave a doubt about what the common denominator that links them is, beyond the mere concept of “technological clothing”. The unexpressed perception is that of an vast dis-homogeneity, and the lack of a conducting thought.

“Seamless”, the title of exhibition, is to promote the idea of a harmonious integration, without discontinuity, between technology and fashion. The declared objective is to create alternative visions that combine the two elements in an attractive and aesthetically pleasing way, but much of the work that alternated on the catwalk highlighted, for the umpteenth time, how difficult it actually is to find the common interpretive key of this partnership. The fashion factor often suffers the consequence, in this lack of finishing on the esthetical level and the absence of an idea of style.

Endangered Senses , by Gemma Shusterman, is a telescopic long-sleeved article of clothing inspired by elephants. The clothing transforms its wearer from a biped into a quadruped, allowing the surrounding world to be perceived in a different perspective, “elephant-like”, through the transformation of seismic and infrasonic vibrations into sounds (normally not perceived by the human ear)

Heartbeat Hoodie , by Diana Eng, is a jacket that has a hidden camera in the hood, connected to an instrument that check the heartbeat. This article of clothing takes “involuntary” photographs every time the heart goes into the state of exaltation, giving us, at the end of the day, a panorama of our unconscious reactions.

Epi Skin, by Marta Lwin, is a series of biological jewellery grown in a laboratory through the culture of epithelial cellule whose growth is contained and guided into patterns created by the computer. The jewellery thus generated assumes the shape of precious ” laces” which are worn directly on the skin.

Space Dress , one of the four projects presented by Teresa Almeida in the series Modes for Urban Moods , is an ironic sculpture clothing that inflates and expands in width to beat daily stress and that sense of claustrophobia that often attacks us at rush hour in the tube. .

But beyond the doubtful difficulties, the idea of possible new aesthetics for “digital” clothing is beginning to be wide spread and is reaching a bigger audience also the U.S., and by some strange paths. The clothes created in these months by Diana Eng (Seamless with her Heartbeat Hoodie ), during a popular TV programme Project Runaway (a fashion reality show ) have put this new union fashion/technology under the spotlight, creating an huge interest, taking the concept of wearable computers through the customs once and for all.

The world of research and the world of artistic expression in the field of wearable is still in its infancy, a long way from a precise definition of its boarders, guided by an idea that for many is an insoluble dichotomy while for others it is an integration still to be invented.