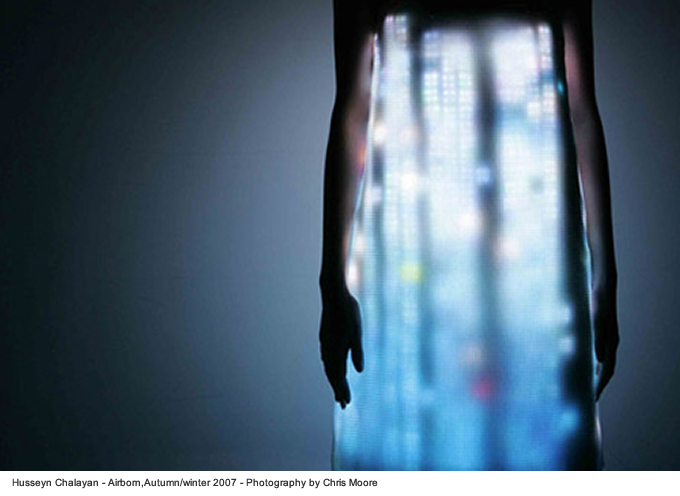 From July 5 to December 11, the Parisian Musée des Arts Decoratifs hosted the exhibition Récits de mode of designer Hussein Chalayan. The visitors of this exhibition don’t belong to the category of female followers who follow the latest trends and haute couture and move around in groups of cutting-edge young designers sketching clothes on their Moleskine.

People coming to this exhibit consist of a well educated audience attending art galleries one can easily seen inside the cubic space of the FIAC-International Contemporary Art Fair, the hype galleries of the Frieze Art Fair, or ones at the International Pavilions of the Biennale, or even the Arduino cards of a hacker space. It is an atypical audience that can be recognizes in Chalayan fashion shows. In fact, his fashion shows look more like an experimental art exhibition that traditional fashion shows. Hussein Chalayan was born in Nicosia in 1970, he first studied in Cyprus, than moved to London in 1993 and graduated in Fashion Design at St. Martin’s College of Art and Design.

The following year he created his own fashion house and made his debut in the London scene – then dominated by Alexander McQueen and John Galliano. His first collection was titled Buried dresses: the clothes were buried in his garden for three months before the show. Processes such as oxidation, metamorphosis, change, and alteration of the fabric have become part of his expressive palette since the beginning locating him among the most controversial, brave and stubborn artists existing in the scene. 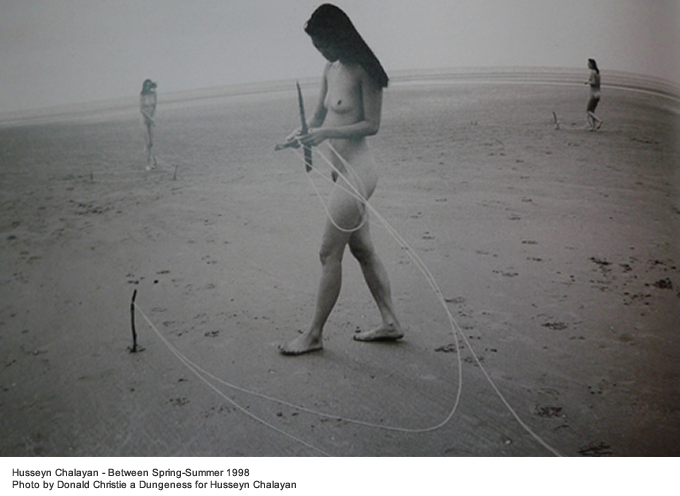 Husseyn Chalayan is a multimedia artist, who distinguish himself among other designers for his explorations of media as diverse as sculpture, design and film locating them in direct connection to current political, social and economic events, and those that marked his childhood. His fashion shows are multi-sensory installations where sound, light, and sensors play a role as important as the body itself. The clothes he crafts don’t make you want to wear them, but to travel and be transported elsewhere, as in the case of the Airmail dress. His imagination and vision of fashion project the viewer into a futuristic dimension a la Kubrick, where one feels more like flying aboard the “Discovery” than attending a show.

His shows immerse you into a dimension where the sense of movement and speed are attached to the concept of migration and exile, as it is evident in the Airplane dress. The dress is entirely made of fiberglass. Its form and matter mimics the structure of an airplane, a element often found in the collections of the artist. Airplane dress is also the title of a film in black and white written and designed by Hussein Chalayan in 1998 as a protest against the bombing of Iraq on that same year.

The voice of a muezzin overlaps with the taking off of the aircraft while a dummy rotates on itself wearing an aerodynamic skirt that opens and closes, reproducing the rhythm of the takeoff and landing of the aircraft.As Chalayan himself claims “the design is a wish or a curse that casts the garment and its wearer in a time warp through historical periods, like a sudden tumble through the sediment of an archaeological dig”. [1] 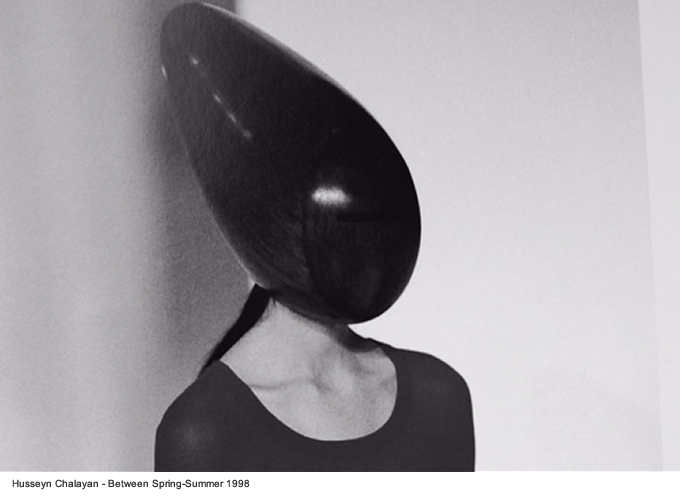 The exhibition at the Musée des Arts Decoratifs invites visitors to embark on this journey through the artist’s creativity. On the first floor of the museum, the emphasis is on topics such as religion, politics, freedom, as we see in Between (Spring – Summer 1998), a collection that explores the concept of worship and identity. What is interesting is not only the final outcome, that is the catwalk, but also the creative process that forms and creates the collection.

Chalayan is an all-round artist who went from short films to sketches, form performances to installations. In Between, for example, he explores the concept of worship and deconstructs the way we define our territory in terms of belief systems. Before presenting the spring-summer collection he prepared a sort of installation on a beach in East Sussex, where the above theme is explored by displaying nude models, equipped with ropes and poles, to demarcate the area surrounding their body.

Through this study, Chalayan shows how the religious code may remove a person’s identity. The same concept is then taken up on stage, where one can see models whose head is entirely covered by capsule-like structures, a barrier set between the seen and unseen, between the head and the rest of the body, between what is naked and what is covered. By doing this, the artist questions the notion of identity that can be easily erased when the face is hidden. 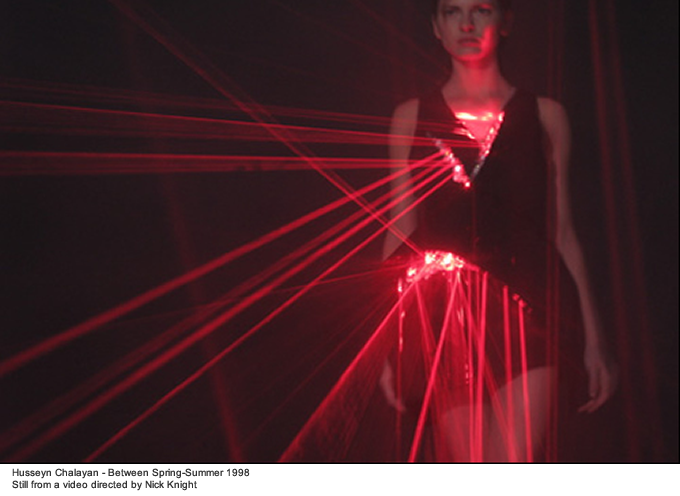 In Before minus now (Spring – Summer 2000) the artist is interested in phenomena such as magnetism, growth and erosion, focusing on the metamorphosis that is able to create new shapes and volumes. Since his early studies, Chalayan‘s situates himself on the borderline between architecture, design and fashion, crafting clothes made of resin, fiber glass, paper, Tyvek, wood and microchips.

The artist creates and recreates the dilemma of location against destination, of traditions against modern world, of identity of the body against robotics, and finally East against West. His works are not the result of a collage, but rather engage with precise historical events, concepts or moral traditions that unify the East and the West, or more generally the sender and the receiver, as in the Airmail dresses. A dress that is simply a dress, whose goal is not to transform a story ceases to be attractive.

Hussein Chalayan as a child dreamt of becoming a pilot. In his dreams, the table became a city embedding a small strip that he used as a runway for landing and taking off, and pieces of folded paper stood for the aircraft. Cartesia (Autumn – Winter 1994) is his first commercial collection that alludes to the paper airplanes he created as a child. The first tests were made of paper, but the folds had the drawback of quickly deteriorating the surface.

Chalayan needed to work with an indestructible material and found Tyvek, a kind of synthetic paper. Airmail dress was presented in Paris in 1999, the same venue now hosting the exhibition. The artist presented this collection of dresses in Tyvek placed in an envelope ready to be shipped, transforming the concept of content-container. 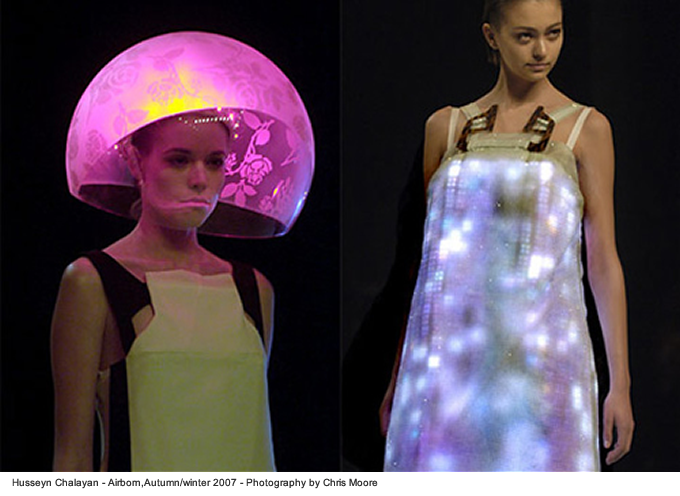 In Panoramic (Autumn – Winter 1998) Chalayan starts from a sequence of photographs of landscapes that he transforms in abstract pictures so as to make impossible to recognize really exiting locations. The images are transformed into immense colored pixels that evoke a fantasy world. In this framework, the designer intends to explore the language and its limits. The collection brings to the stage ethnic costumes, uniforms, hybrid clothes that blend the individual with the surroundings and transform her into an anonymous being.

What does it feel to realize a uniform to celebrate an invented ritual and a national dress for a country that does not exist? Panoramic is a kind of nursery rhyme about clothes as a territorial claim, and reminds of the stories by Italo Calvino. New identities can be described and worn, new codes can be invented, new colors can be introduced, we are free to create. The fashion show ends with models holding huge colorful cubes that are nothing more than a direct reference to the pixel as one of the funding ideas of Panoramic.

This collection also stands out because it contains the conclusion of Ludwig Wittgenstein Tractatus: what can be said at all can be said clearly, and what we cannot talk about we must pass over in silence. Panoramic plays with the lenguage limits, so the artist concerns to privilage the visual rather than the verbal. We can try to define things through language, but the interest of Chalayan is to create things that cannot be described. 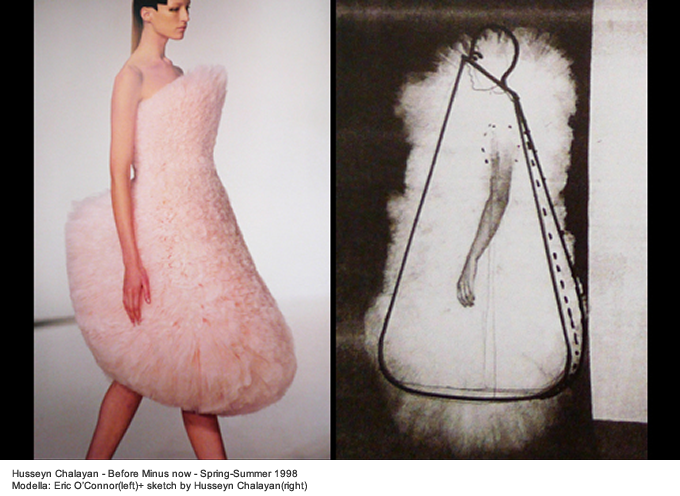 On the second floor the journey deals with technology, the movement of the body and above all the change of functionality in clothes controlled by the person wearing them. A striking example is the “remote control dress” (exposed to the Judith Clark Costume Gallery in 2002) made of resin and fiber glass (like Aeroplane dress) that is transformed at the touch of a remote control. Through this process Chalayan enacts an artificial metamorphosis of the body.

Through Genometrics, Chalayan approaches scientific laboratories and analyzes chromosomes and DNA through a program that he developed himself. The basic idea is to study how different individuals living in London adapt to the life of the city depending on the reaction of their DNA to the London soundscape. The program allows to map every letter of the DNA sequence of a person onto the surface of the dress. Each letter is then configured to meet a certain sound frequency. When the garment is exposed to sound input it generates specific sounds and patterns that are then “frozen” and reproduced in materials resembling tapestries. From this sound experiment Chalayan created sculptural jackets, helmets resembling Persian rugs and skeins of cotton.

In his creations, the movement is embedded in the fabric and the structure of the clothes. There is always a dynamic movement linked to his clothes. The viewer has the impression that the clothes in his collections have arrived or have been through something else before landing on the scene. In his hands, clothes lose their length, they change their volume, they become projection surfaces and they acquire identity. The feeling you have is that clothes could then work even without the body: they are equipped with batteries, motors and integrated circuits that enable them to direct, orient and control every change in detail. 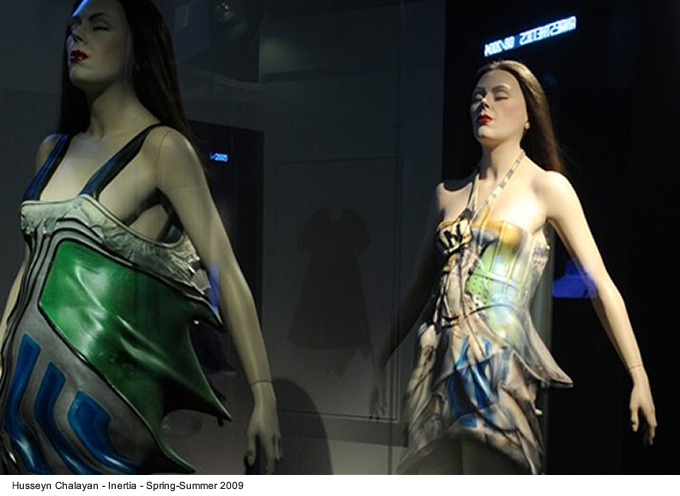 What to expect from Chalayan upcoming collections? Perhaps in the future we will be projected in a universe in which we will only wear clothes equipped with microchips that set the density of the tissue to match body temperature, or clothes that integrate sensors that allows them to react directly to the emotional state of those who will wear them. For now, if you want to see the exhibition, the advice is to take a plane and wear warm clothes.

[1] – the design is a wish or a curse that casts the garment and its wearer in a time warp through historical periods, like a sudden tumble through the sediment of an archaeological dig