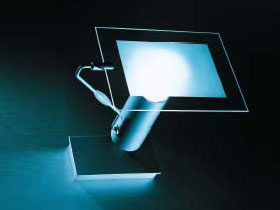 Also this year Milan is speaking about design again in the liveliest and most gossiped about week of the season, Il Salone del Mobile. Here design is extended over a closed public to awaken wider curiosity and consensus, but still waiting to know if also this year the Salone del mobile will be a sort of collective relay race between aperitifs and parties or if instead everything will be reduced to a more authentic and introspective social and cultural dimension. Digimag went to discover perhaps one of the most interesting and innovative events of the exhibition that does not propose itself as a brief occurrence, but attempts a new contemplation about design and about its contemporary polymorphic expressions.

In fact RLD, ovvero la Repubblica Libera del Design will be inaugurated on April 6th. The Centre Culturel Français hosts six sets between decoration, research and new aesthetics, testifying yet again the social and cultural vocation of the city, interpreting the most important themes of the exhibition with taste and intelligence.

To celebrate the event Federica Sala, together with Marie-Laure Jousset , responsible for the project that proposes design as a configuration of an ideological state of research, that crosses the continents and the countries and riunites individuals moved by the same will; to wonder about the possible territories of design. The exhibition intends to explore these new territories destined to develop and become an integrating part of planning projects in the years to come. Declaring that the term «design» represents today a much wider togetherness of professions, some of which are completely new: graphic design, web design, food design, fashion design, sound design, garden design, whose cartography is getting bigger every day.

The sets exhibited interpret exactly this tendency, pushing themselves towards the borders of experience based on creativity, innovation, and research.

Miriam Petruzzelli: Design between reality and utopia, between functionality and aesthetics. We asked Federica Sala how she conjugates these aspects inside RLD?

Federica Sala: When the idea of the exhibition was born, on one hand I followed many different paths through the panorama of French creativity looking to be able to present a diverse selection of stiles and genres. On the other hand, I tried to indicate some of the new approaches that face the design world. There are many fascinating projects that are not exhibited and that, who knows, may be the follow up of the exhibition. The chosen title was born out of this dimension of “work in progress”, and wants to be a type of proud demonstration in continuous movement of how different the ways of facing the surrounding reality are.

I believe it was Enzo Mari who said that design is the prism through which we look at the world. Inside the exhibited projects there is, for example, a very poetic set by Arik Levy , made up of a group of light sources, all with an organic form. It is purely aesthetic project full of emotions and not merely decorative. I would say that in general the projects are more of entrance door to utopia, to a dream and to a game that is not orientated towards any real dimension of functionality.

Perhaps because for many designers today this is the real functionality, to bring what is lacking to society, the mechanism of beyond, of dreams, of the apparently superfluous, necessary instead to create sensations and introspections, often put aside by an approach exclusively based on technology and innovation.

The project by Oliver Peyricot is for such a purpose pure criticism on a design based on aesthetics of comfort. It is a type of demonstration in which the designer theorises that major comfort comes from a well being in ones’ own environment, perhaps in total nudity, rather than surrounding oneself with objects that should make everything much simpler but that then complicate ones’ life.

Miriam Petruzzelli: I totally agree, but what are the implications, the connections or the concrete opportunities that these projects constitute, in relation to the future towards which they tend, beyond industrial design?

Federica Sala: A project that offers a concrete answer is certainly Ivy di Oriane Dambrune e Marion Excoffon , as it is able to join a need for typical functionality of the contemporary world, that is how to hide the jungle of electric wires that invade our houses and offices, transforming it into an aesthetical value thanks to the assimilation of wires and sockets, to a tropical climbing plant.

Another example could be the collection Vynil ideata da Domestic : a series of artist’s graphs for personalising living spaces in an off the cuff and fresh way. An alternative to old style wallpaper, which today is coming back into fashion, that plays on its ad-lib potential. I find that it represents the actual evolution of the world, in continuous movement of spaces like thought. The graphs are proposed according to a model devised by the designer that created them, but they are more susceptible to every modification by those who use themtherefore a continuous and contagious creative process.

Miriam Petruzzelli: Work more and more contaminated and in continuous evolution. The work by RLD, by the pupils of Ensci for example, also re-propose the theme of the relationship between natural and artificial. With what prospective and with what creative results in your opinion?

Federica Sala: Some of the projects by the pupils of Ensci aim at going beyond the limits between artificial and natural, blending the two elements together and are born out of many different approaches. For example Forêt d’intérieur  di Yoann Ollivier eVerena Augustin proposes a hybrid between the natural value added by nature to daily life and its artificial reproduction. Differently Kaduc di Denis Pellerin tries to artificially recreate the natural processes of plant despoliation and sprouting.

Miriam Petruzzelli: And finally, going back to the dream, to the game, to the utopia, how much space is there for the game and the irony in the work presented by RLD? What emotions and what importance have all these elements in interaction design?

Federica Sala: I would say that the dimension of game and that of irony are more some designers rather than others and inside the proposed selections. There are certainly some projects that are deeply drenched in it. In a particular way Robin di Denis Pellerin , a small plastic leaf ready to become a type of artificial prosthesis for plants, that have seen better days, but also ready to invade every type of object thanks to its aversive charge.

Digital art as interaction design are activities that hide from the marriage of a technological support to then be transformed into emotional vehicles.

Electronic Shadow with Camera Oscura (Dark Room) present an installation wholly interactive and completely sensorial. At the same time their project tries to outline a future route of poetic domotic, that is not pure technology but transformed in means to make our habitat a shelter of emotions. The project theorises neutral environments, without strongly featured furniture in line with, but transformed by our emotions and by our memories. An enduring and drenched space of ourselves able to modify itself based on our moods.