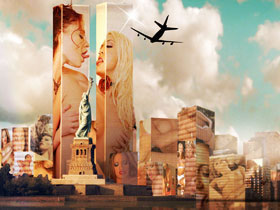 I still have the images in my mind, I am happy to have participated in the first edition of Resfest in Rome at Palladium Theatre ( 18 th -20 th November 2005 ). Let’s try to sum up what the new “artistic vanguards” are elaborating in the world of video. We also remind you that this is an itinerant festival of digital image (at its 9 th edition), attentive to its most experimental and innovative forms, famous throughout the world thanks to an extraordinary program and to a worldwide tour that reached almost each continent. In Italy it reached Turin before Rome .

We could say that the keyword is keep it curious , the leit-motif of the entire festival, the curiosity in fact is the must of the festival. A clear message which appears between the hypnotic lines of the catalogue, stimulating a double vision: on one side, towards the artist, who wants to create and to be all eyes on the world inside and outside himself; on the other side, towards the spectator ready to receive with curiosity an endless series of audiovisual stimulus. Who does he want to become curious? Who’s curious? A curious person is someone who wants to know, to look into, to learn and to experiment. This is how the video maker-creative mind, thanks to his curiosity, is pushed to go beyond the frontier dividing the disciplines, testing him. The artist is sensitive to technologic discoveries, he loves to use innovative languages of expression, reinvents during the process of art, culture and technology. The past is turned into digital and has a new life in the present; the sight assimilates organic worlds and digital architectures: the chances have no limits.

Resfest is perfect for this; it’s a platform, a window of visual art lab where it happens a lot. Who manages to accede to it with his own works, has the chance to reach a public of worldwide extent and will be known in a short time and appreciated. In the edition of Rome , wanted by Fox Int. Chan. Italy, we could appreciate an exhaustive selection of the entire program of the festival and, near the 6 sections of RESFEST 2005, there were some initiatives created expressly for Italy , as the Italian Window.

The Festival is characterized by short and feature movies, digital animation works, music videos and much more. They are fantastic, adventure and experimental programs divided according to distinctive interesting lines as Shorts One , a series of feature movies, from very short to medium duration ones, with the most different themes: By Design presenting the last innovations in motion graphic and in broadcast design, Cinema Elettronica and two retrospectives: Four seasons of Traktor , a presentation of each work of the Scandinavian collective divided into four categories and Beck Retrospective with 17 video clips of the US musician. There were presented two feature movies: Infamy , a documentary on “graffiti taggers “of some of the main US cities, cheered by the critics at Sundance Film Festival and Ginga. Soul of Brazilian football , a documentary on Brazilian life described through the most popular sport in the world.

City Paradise of Gaëlle Denis , one of Short One ‘s, distributed by Channel 4 Television, shows how ,to the eyes of a Japanese girl just arrived in London, it could seem frightening. The metropolis leaves its mark on us, it seems threatening and makes us feel such as strangers among strangers, but it belongs to us, it is part of our collective imaginary, in it and with it we become adults. Musicians and artists make it become alive and musical and set it to music, or, as in this short movie, they show fantastic aspects of an underground and hidden world: a poetic work, with an emotionally strong chromatic choice realized thanks to the Lightwave, Tons, Flame, Incite techniques.

If we want to spend some words on a brilliant computer graphics work, we can’t forget to mention Over Time by Oury Atlan , Thibaut Berland, and Damien Ferrié . A group of puppets, similar to frog Kermit of Muppet Show, tries to keep alive its own puppeteer (Homage to Jim Henson) with musical performances around it. Realized at the end of the course of this student team, it emphasizes their incredible talent. The short movie is visibly perfect and extremely touching.

The Scandinavian collective, Trakor , realizes instead music videos and commercials for some of the most famous labels in the world, such as Nike and Diesel, and for brands such as MTV. What strikes you most is that we aren’t faced to simple commercials in the commercial sense of the term, but to a new concept of commercial, tending to favour the experimentation beside an ironic and funny approach. We could say that their success is based, beyond their talent, on the Peter Pan syndrome.

The young Beck and other directors, who worked with him, seem to suffer from the same syndrome. If only we look at the names of some of the most brilliant videos of Beck, we can find the video makers that, in some sort have contributed, recently, to give a surplus to the concept itself of video clips: Michael Gondry, Mark romanek, Stephane Sednaoui, Garth Jennings ( Hammer & Tongs ). From the point of view of music, the eclectic US artist loves not only to experiment and to innovate continuously, but to make funny, colourful, clever and surrealistic videos too.

Cinema Elettronica is a selection of music videos, a program showing the current status of visual experimentation combined to electro music mainstreams. If we wanted to determine the key words in order to define music videos of the last years, we would say: digital technology, experimentation, freedom of image. Electro music is perfect for digital elaborations such as virtual world exploration and visual investigation.

Video clips made in UK are the leit motiv, even if the fact that UK was a breeding ground for ideas and for minds was quite clear. The themes of the twenty video clips belonging to this program are the most differing, but I wanted to focus on two videos in particular, where two paranoid mental creations are turned into digital ones in a brilliant way. The first one is a video of Jimmy Edgar (artist of the label Warp) Is this a real city? directed by Ben Dawkins, where the protagonist is victim of an imaginary friend’s arrogance and the second one is the brilliant video of Dom & Nic for Chemical Brothers “Believe”, where the protagonist, a young worker in an auto factory, images he’s run after by the robots he works with. From that moment on, he’s followed in the streets of London , until the time the young boy, in dire straits, lets him go to a hysteric laugh.

In the two videos different type of paranoia are represented, both disturbing but differently treated. If, in the first one, the protagonist meets his dreams’ girl, with her imaginary friend, in the 2 nd one, the protagonist is increasingly paranoid and frightened. A reflection, made by directors of different origins, on human paranoia, from the loneliness won with the creation of imaginary friends to the sense of persecution.

The Italian Window, thanks to whom the artist tried to give a view on the Italian artistic reality, and especially Rome ‘s one, shows attempts of production of international interest, such as Fabrica, centre of research on communication of Benetton Group. They are interesting works, but still not suitable to compete at an international level. However, we noticed with pleasure that satellite channels find in Rome a privileged city, such as Fox, but also very interesting and very Italian production and post production studios such as Frame by frame, PoolFactory and Flyer Communication.

Other important moments of this Italian section were also the Studio Tour , round tables, presentations of new digital technologies, workshops, the portfolio section and live performances by groups or VJs belonging to the artistic and creative scene of Rome . Thanks to the meeting presentation TV Design in Italy , organized by the society of creative communication Frame by Frame, we looked at a series of images of the old and new graphics of TV, both terrestrial and satellite.

In conclusion, the only negative aspect of Rome Resfest was its lack in a meeting/debate with one or more international directors belonging to one of the sections of the festival, the only moment they could have answered to the curiosity of the public. Moreover, we hope to see as soon as possible more sections devoted to female proposals the current festivals lack in.

In a background such as the present one, where the revolution of numeric images engenders a “process of derealization and of ghostification of reality” ( Alberto Abruzzese, “Prefazione”, in Videoculture of the end of the century . Napoli , Liguori Editore, 1989, page 8), you mustn’t undervalue how, digital work, such as music videos, animation or commercials, managed to face with new technologies re-elaborating the approach to the images profiting by each possible effect on the post-production stage.

What you can understand going to such a festival is that new Stalkers born and widespread rapidly, a sort of new hunters of strong sense perceptions. They, in a Tarkovskian sense, guide artists and scientists through the muting zone between present and future.