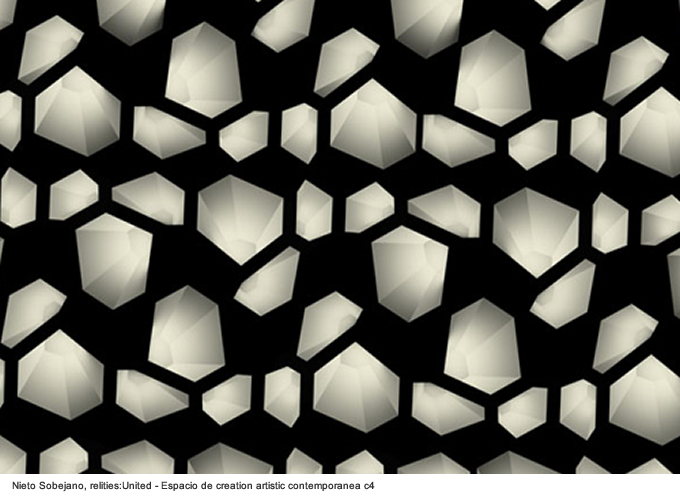 Realities: United is a Berlin based studio founded in 2000 by brothers Jan and Tim Edler, dealing with the contiunuous experimentation of the ephemeral boundaries between digital art and architecture. The studio, by now very renowned, has received in the last few years lots of international recognitions for the design and production of some architectural works and artistic projects, a lot of which are part of art centers collections of worldwide importance such as Moma and the Vitra Design Museum in Weil am Reid.

We use the occasion of the recent publication of their first monograph “realities:united featuring“, edited by the critic and art curator Florian Heilmeyer and published by Ruby Press, to retrace United: Realities‘s carrier and find out more about how the collective has contributed to the current survey of Media Architecture. 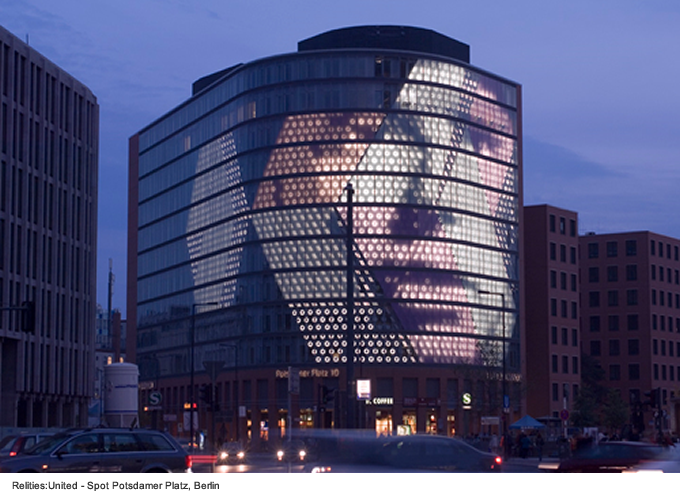 The media architecure is a kind of specific urban computing which consists in the integration of one or more projection surfaces into the facades of a building: the constructions surrounding Times Square in New York and Hachiko Square in Tokio are some of the archetypal examples of media facades, something dangerously comparable to the idea of a modified television moved to a public space. Instead it’s about a new possibility of working in a very specific way, of using various knowledges coming from architecture and embedding them in the design. In this perspective the architects’ role is to reconsider the physical structure and how it could be modifyed to adapt to this format.

United Realities has found throughout the years, a series of excellent answers to the urban problems posed by the installation of the conventional media facade, proposing innovative solutions able to merge together the screen and the projected infrastructure, keeping intact the pre-exsitent structure during daytime and making it something new during night-time. This kind of intervention on buildings, which modifies the look of the facade redifying its connection with pre-exsiting architectural stratifications and with the urban space, makes it possible to modify difficult urban situations through an apparently purely aesthetic strategy.

The first great work designed by Jan and Tim in 2003 was BIX, a membrane comprised of 930 40 Watt fluorescent circolar tubes integrated in the external gap of Graz’s Kunst Hause, which changes the building’s surface into a low-resolution over dimensional screen capable of projecting simple sequences of beating images and text flows.

In 2005 it was Spots turn, (active untill 2007) maybe the most famous among the Studio’s Works, which distinguishes itself for being the largest media facade ever installed in Europe up to today and for being installed in a square of incomparabile historic and political importance, the Postdamer Platz in Berlin. The construction of the screen was accomplished through the installation of a huge low resolution illumination grid bewteen the actual facade and the crystal facade which covered the building; this matrix made up of fluorescent tubes was elected to implement the structure already present rather than to transform the structure into a media installation. In this case aswell, Realities: United has worked on the pre-existing building through what is architecturally defined as a peeling operation, an intervention which is restricted to the treatement of the external surface of the building and to its predisposition to the installation of LEDs on the facade. 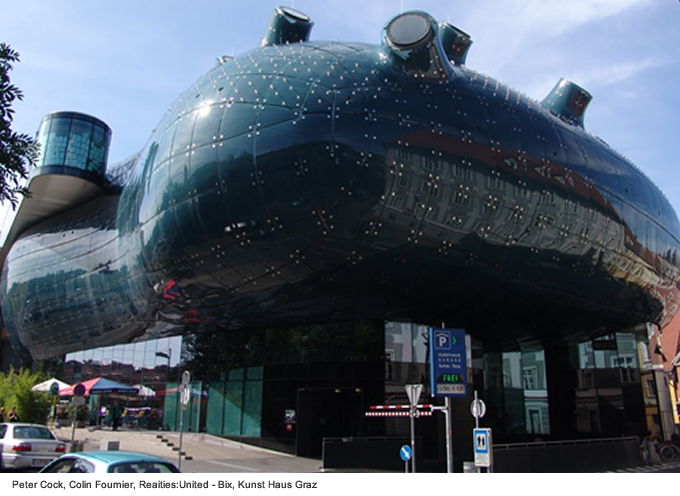 Just like the other interventions designed by the collective, the architectural object was inserted into an urban space “in mutation”, a part of the city which after the wrecking and an extended neglect period was transformed, by the Piano/Jahn project, into a commercial and tourist zone active only during night-time. Through the creation of Spots Postdamer, the square was turned for two years into a space of aggregation and experimentation during night hours. The intervention turned the building into an installation and thanks to the lighting system the building acquired the identity of the most luminous object of the square, activating this district.

The Urban Entertainment Center ILUMA in Syngapore and the new Contemporary Art Center C4 in Cordoba, the latest project of the studio still in the works, are two more examples of critical spacial situations solved through the installation of a media facade. Crystal Mesh is the name given by the german studio to the facade designed for the building complex “ILUMA” in Syngapore. It combines aspect of a conventional facade with the ones of a luminous installation. Crystal Mesh is a shell which covers the frontal part of the building, while the construction-physical functions are carried out by another exterior structure placed on the back of the facade. The project is made up with a tassellated pattern made of 3.000 modules of polycarbonate covering a facade area of more than 5.000 m2. About 1.9000 of these modules contain a regular matrix of compact fluorescent light tubes forming “active” patches within the facade. At night the light matrix superimposes the idiosyncratic physical structure of the white and crystalline daytime facade.

The irregular arrangement of these patches  dividing the facade into areas with different “resolutions” and intensity  does not create a large homogeneous screen in front of the building, but it amplifies its communication skill, constituting the essential ingredient of its architecture. As a whole it doesn’t look as a high resolution monitor because sometimes the active light elements are distributed across the surface sometimes at small, sometimes at large intervals. The changeability of the nocturne and daytime appereance has been studyed the same way. During daytime, infact, the facade sends light “signals”, aswell: the reflections of sunlight on the polycarbonate crystals 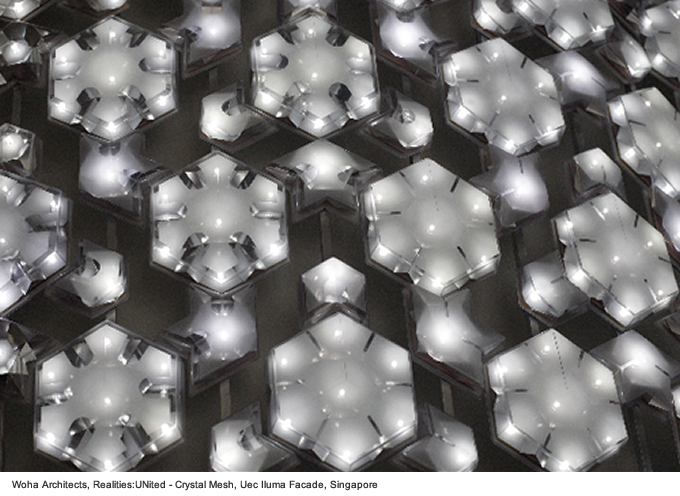 So, the facade is able to change the character of the building’s skin, giving a dynamic expression to the whole structure and performs at the same time a signalling function. It emerges from this description how the esthetic strategy used by the building is similar to the one used for the Postdamer Platz, one more time the values of dynamism and modernity are carryed out by an innovative use of the light. What is important to higlight is that the facade was installed into the Urban Development Center to turn the above-mentioned zone of Syngapore, up to that moment used with commercial aims and so up and running during daytime, into a point of aggregation and of nightlife promotion.

The ILUMA center, located in the Bugism neighborhood, is a building complex dedicated to entertainment designed to attract a wide spectrum of society, both local and foreign, with the aim to create at the same time a state of the art through the introduction of an only object.

The winning project for the Espacio de Creacion Artistica Contemporanea, located in the Parque de Miraflores in Córdoba, conceived by the Studio Nieto Sobejano Architecs in Madrid, initially suggested the installation of a low resolution facade into the part of the building facing the Guadalquivir river; later, the studio commissioned from United: Realities the creation and design of this media skin. The future Center of Contemporary Art in Cordoba was supposed to connect the historic center to the Congress Centre Building by Rem Koolhaas reassessing the river zone and at the same time this new part of the city; for this reason the architects in charge decided to develop a building on an horizontal axis and to give it a rectangular and streched shape.

The installation of the facade following the horizontal shape of the building plays with the importance of a lateral view, which shows through the light opening on the city at 180°. The starting point for the formal developement of the facade was retraced in the significant building’s structure, whose surface is decorated with a tiled pattern of concave polygonal shapes. The GRC surface (a cement reinforced with fiber glass) shows a system of uneven alveolus of different density and sizes.These small basins are individually enlighten so that they became pixels of this big screen, each one of these cavities seems to be unique in shape and size and also their arrangement acquires an irregular appereance. 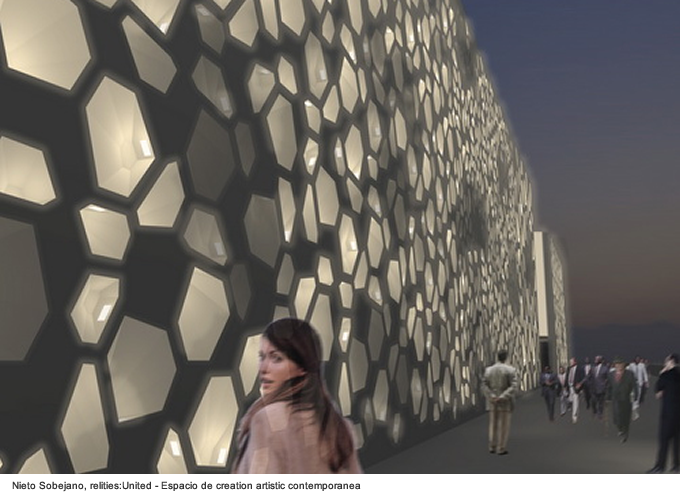 Only the distribution density stays considerable, ensuring an image flawless in the general vision. Moreover, the pannels conteining the cavities are of three different sizes, in connection with the whole size and with the number of holes digged into their surface. As it happens in the retina, these components allow the definition of areas of different density and sensitivity on the facade. Technically, every cavity is enlightened by an undirect light source (compact fluorecent bulbs), which turn on the back side of the cavity and the lateral surface. The large scale system, based on fluorescent lights, allows a 20 frames per second image rate. The surface concavity directs the light reflection to the horizontal direction and limits the luminous pollution and the energy consumption.

So, what is evident as basic characteristic of the works of this collective, is how light is an attention conveyor and is used as gazes conveyor. The intervention of United : Realities is never aimed only to the building, or to the adjoining square, but to the alteration and resemantization of the whole urban system. In the firt case described in this analysis, it was about the heart of Graz city. In the second case, about a building located in the new economic-financial center of Berlin, vacant for years, which was advertised to became the new place of interest and a transit place. In the case of Syngapore then, the effort was to alter its old city look creating a new district dedicated to the nighlife. In the end, in the case od the city of Cordoba, it was about turning the New Center for visual Arts into a new connection between the New and Old city.

The facade intervenes in the space, through an artificial lighting system it redefines the day and the night. And the building finds a new life.