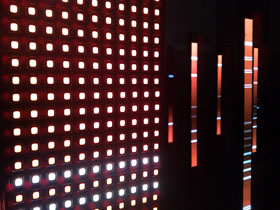 This text is the first of a 5 essay series, written by Amercian interaction designer and theorician Jeremy Levine entitled “Products of Negotiation & Spaces of Possibility: Quantum Systems and Interactive Media Art”. The text (whose original title is “The Human Subject and the Production of Reality in Quantum Systems and Interactive Media Art) was translated in Italian for Digimag, according to the author, and first pubblished for an art-critic magazine.

The division between subject and object is a natural result of our sensory impressions ofthe external world, which seem separate from the thoughts in our heads. When we stare at a painting we apprehend it as an object distinct from our conscious self.

This binary split between the world .out there’ and the world in our heads is the foundation of classical logic. The very notion of objectivity is predicated on the idea that the universeis composed of subjects who are capable of remaining aloof from their objects. This is not the case when we confront interactive media art or quantum particles, neither ofwhich can be considered .objects’ in any normal sense of the word. Instead we have systems—open, complex systems, in which we play a starring role. “In the drama of existence we ourselves are both actors and spectators”.

A work of interactive art, like a quantum system, injects the choices made by human beings “directly into the causal structure. It specifies the effects of these probing actions upon the systems being probed”. Together, subject and object are unified into an ontological whole. In both cases, the observer’s actions are considered part of thesystem under observation. In both cases, the system is composed of an invisiblecomponent, digital or quantum, and a human component. In both cases, we areconfronted with a variable phenomena or display that requires our intuitiveunderstanding of .things’, be supplemented with a model based on .systems’. This requires the logic of synthesis and complexity, rather than reduction and analysis.

“We may state as characteristic of modern science that this scheme of isolable unit acting in one way causality has proved to be insufficient. Hence the appearance in all fields of science, of notions like wholeness, holism, gestalt, etc….systems of elements in mutual interaction” ( Ludwig von Bertalanffy, “General System Theory”, (George Braziller, New York, 1969), 44).

The web based media art project, “D-Cell”, by Casey Reas requires that the visitor to .touch’ the art in order for it to come to .life’. Try to touch a Rothko painting and you’ll find yourself in handcuffs. Quantum particle systems seem to possess the ability to communicate instantaneouslywith each other, defying our classical understanding of space and distance. The same experience is captured by the .sense’ of non-locality fostered by the World Wide Web, which seems to collapses space into mouse clicks and links. Though the speed of lightlimit is not broken during our web-mediated interactions, we often experience animmediacy that erases distance, creating a “confounded sense of place and proximity” (Vince Dzekian, “Distributed Spatial Practice, as Applied to the Art of the Exhibition” – Invisible Culture, Vol. 11, Dec. 2007, http://www.rochester.edu/in_visible_culture/Issue_11/dziekan/Dziekan_print.pdf , 11).

“15×15” by Richard Vickers is a grid of constantly changing web cam images uploaded by visitors to the project’s web site from around the world. “15×15” exists in the non-physical realm of cyberspace, just as quantum wave function exists in the nonvisible realm of the sub-atomic world. In both cases, our classical notions of objects arechallenged by our experience.

“It [Net art] often deals with structural concepts: A group or an individual designs a system that can be expanded by other people. Along with that is the idea that the collaboration of a number of people will become thecondition for the development of an overall system. Net art projectswithout the participation of external persons are perhaps interestingconcepts, but they do not manifest themselves as a collective creativityin the net”.

This notion of reality is, as French philosopher Nicholas Bourriaud describes, “a productof negotiation”. The same negotiation between the conflicting emotions and connotations occurs inside our heads when we encounter any work of art. But in our encounter with .interactive art’ this negotiation requires more than mental effort. Interactive art demands the engagement of our bodies. Interactive art demands to be .touched’ even if -as in the case of Internet art- that contact is in cyberspace and mediated by a keyboard. .Interactive art’ reflects the idea that our world is composed ofsystems rather than merely objects.

For art theorist, Jack Burnham, this leads to a “refocusing of aesthetic awareness-basedon future scientific technological evolution—on matter-energy-information exchangesand away from the invention of solid artifacts”. Burnham’s prediction, made in the1960’s, of the .death of the object’ hasn’t panned out, but the rise of a dialecticalpractice, such as interactive media, which has both object like characteristics (thehardware) and a non-object characteristics (the software) was acutely prescient. It is not just a coincidence that Burnham’s “matter-energy-information exchanges” find theircorollary in the information-theoretic metaphors used by quantum theory.

The variable aesthetic output of interactive media art in response to human interactionis useful metaphor for grasping the elusive quality of quasi-mythological quantum ‘wave function’. The .wave function’ of quantum mechanics, is a model of the uncertain andcomplex behavior of sub-atomic particles in response to our interactions. When a
quantum particle is probed its .wave function’ collapses in response, offering a new field of possibilities’—which in turn is represented by a new wave function. Adopting thismetaphor, we can say that object-based art is akin to classical particles, while interactive media art is more like the quantum wave function that produces an evolving space of possibilities’.

The connections between interactive new media art and the invisible quantum world do not require a .metaphoric stretch’. The similarities are too uncanny to ignore.