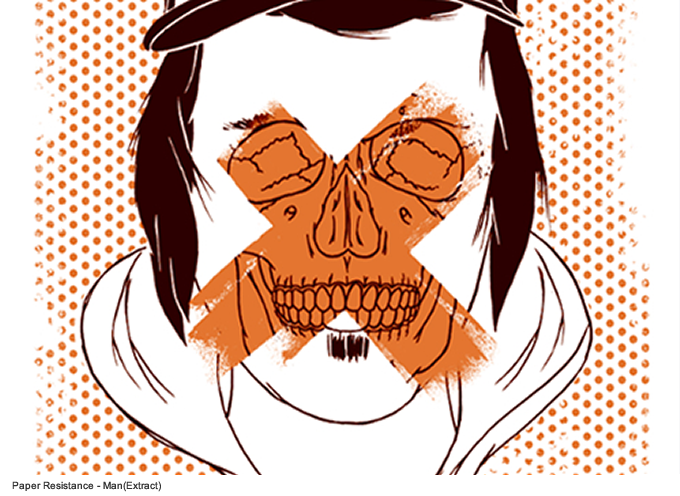 By reading in one go – as imposed by the absence of punctuation – this long periphrasis, one witness a superimposition of images, concepts and ideas that flash in mind like they do into Paper Resistance drawings. Its work of counterpoint and oxymoronic juxtaposition of figures and symbols of modern society, delineates in a biting manner all the contradictions and deformations of the present. Through a plain stroke, its composition defines clearly in frames and posters filled with alienating and unpredictable associations.

Fresh from the presence to the fifth edition of BilBolBul Festival, whose it depicted the logo and presented a project on the border between drawing and participation, Paper Resistance is a widely known name in the illustration world, and a reference point indeed in underground graphic and self-production area. Its last album, Vertigo, has been produced for that same Zooo Press that it contributed to found and where many famous names in the Italian urban and drawing panorama work: Blu, Ericaicane, Dem, Ratigher and more. 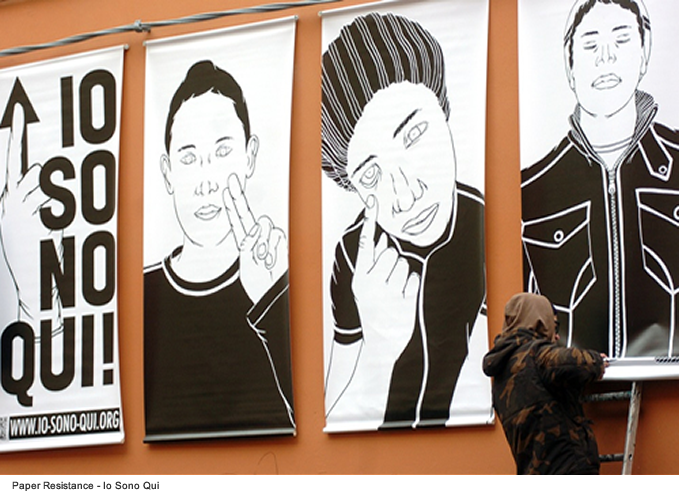 Among the more recent projects emerges Io sono qui! (I am here!). The presence of the first person strengthened by the exclamation mark contains a meeting between the artist and the young tenant of a detention home. On one side it is a workshop to get the boys closer to comics, horizontal and self-produced means of expression capable of conveying different messages, while on the other it is an installation creating transparency between the interior of the detention structure and the outside world.

After all, in the past the artist had already been interested in what we could call “aesthetics of surveillance” through publications and expositive and editorial works. From Handcuffs, exhaustive and diachronic catalogue of handcuffs, to Security First, personal work with an ironic title, following up to some series and single drawings depicting service dresses, repressive means (nightsticks, shields), protection and defence tools (anti-gas masks, helmets).

The activity by Paper Resistance fits perfectly into street culture as well. In fact it is not difficult to find it in festivals and books about it, showing the fact that paper, so far as important, it is not the only battlefield where the war is fought. And even for the most trained eye there is at least an aspect of its production that can be found in the streets or within CDs shops: the realization of unmistakable covers and manifests which accompany the discography and concerts of bands like Pan Sonic, Comaneci, Father Murphy and Sonic Belligeranza. 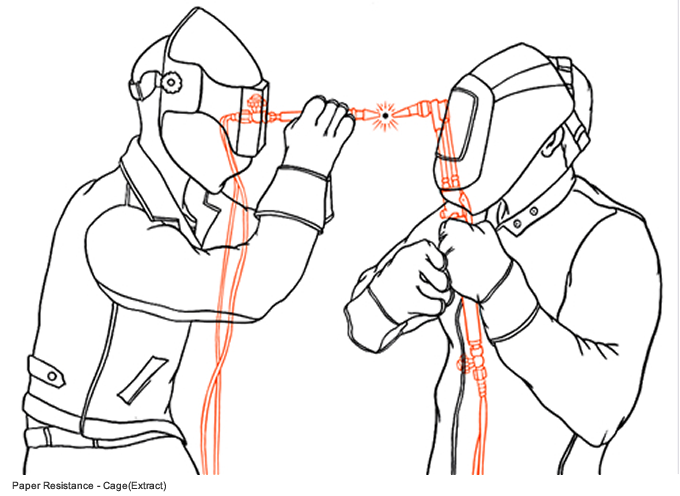 Claudio Musso: I love language and most of all the playful forms it offers. The name you chose is open to a series of ambiguities that give rise to some reflections. “Paper Resistance” as a fragile, weak and vulnerable resistance. “Paper resistance” where the paper is the only (and last) means in which to seek shelter. “Paper resistance” as weapon of protection for the masses, manifest of painted guerrilla warfare.

Paper Resistance: Well, actually the playful forms coming out of the name I chose were not been thought in advance; the name was born in a pretty intuitive and quick manner. I began working with illustrations mostly for communicative needs, for the first things I made was stickers that I produced to stick up all around. But this happened nearly a decade ago. The contents were much politicized then. “Paper Resistance” was a little like doing 1+1=2.

Claudio Musso: The projects and drawings you realize are connected by an extreme coherence. Though they have distant topics, it is possible to follow back your research up to a sort of “poetics of control”. Your works’ titles and the topics you analyze turn around the idea of freedom, or, better to say, deprivation of freedom. How was born this obsession?

Paper Resistance: In my work I prefer dealing with matters, topics and sensations I really see, feel or perceive, rather than watching my belly button and describing it through some drawings. Then there is obviously a phrase of global elaboration summarizing the interpretation and representation of what comes around. I “feel” the control because it exists and I represent it because it is likely necessary to do that. One of my favourite approaches is what Milton Glaser defined as “drawing is thinking”. 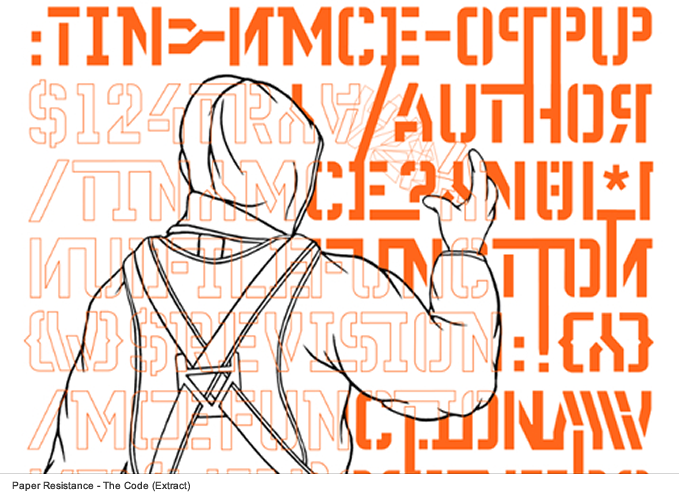 Claudio Musso:In your last editing work, Vertigo, the use of duotone patterns the vision on two different and complementary plans at the same time. The image in close-up and the one on the background (interchangeable as if in a cognitive psychology game) melt to form a unique paradoxical figure that is nourished, depending on the cases, by opposite polarities such as natural/man-made, human/inhuman, open/closed…

Paper Resistance: Precisely. Vertigo has been conceived and realized as a work exclusively based on the stroke. No kind of patterning, just lines and strokes. Under a certain point of view it is a new approach compared with the ones I previously used, and yet when I began working on it I felt like there would have been much room for improvement. The utilization of duotone then comes in handy because it is capable of structuring new and different interpretations on a graphic level as well.

Claudio Musso: The often soft and illustrative stroke of the drawings introduces the raw violence of the scenes. The well spread colours, the moderate tones and the neutral background have an oxymoronic relation with the tragic nature of the scenes described. Some famous examples, in wide chronological time, soon come in mind: from the medieval Tacuina up to the constructivist graphics. Who are your masters? What are the sources of your inspiration?

Paper Resistance:The sources of my inspiration are not necessarily of graphic nature. I am easily swayed by everything I see every day, but then all of that is elaborated by following an interlocking game and some combinations based on paradoxes. In a certain way I see this kind of approach in the works of artists such as Gee Vaucher, Winston Smith, Jamie Reid and Raymond Pettibon, and maybe John Heartfield most of all. 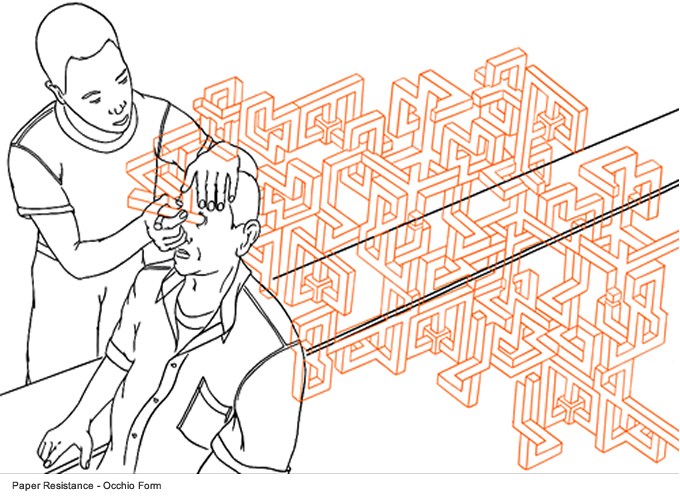 Claudio Musso: Your never accidental combinations come from various fields and media. In the case of Handcuffs your search has been historic, as if you were an archivist. The images of the handcuffs, unmistakable icon of the loss of freedom and allegorical figure of a forced link, belong to different and more or less remote times and they outline some characteristics…

Paper Resistance: I think the most important characteristic lies in the last typology of handcuffs illustrated in the work, the one called “since 1999 – world wide street”. The plastiCuffs, if you ask me. I guess they appeared in Israel first, but since 1999, in the battle of Seattle, they began spreading in the streets of every “western” demonstration. It is interesting the fact they are light and plastic-made, so that every police-man can carry as many as he wants. As if to say there is plenty of them for anyone.

Claudio Musso: Speaking about recent events, your presence to the last Bologna BilBolBul Festival witnessed the realization of the coordinated image and a project. Io sono qui! starts from a direct relation with the tenant of the Pratello detention home and it has been translated into an installation reflecting and connecting the inside with the outside. How is it happened?

Paper Resistance: The Hamelin association, the body organizing BilBolBul, asked me to draw the principal illustration of the festival, and as an author I was also invited to present an exposition. I meant to create something different from a “standard” exposition. I had the idea of working with the detention home since years, and I thought the festival would have been the perfect chance. So, along with Hamelin we conceived and realized Io sono qui (http://www.io-sono-qui.org).

The project was basically divided in two different phases. The first was about collaborating with the young tenants through photographic labs, working on portraits and self-representations, while the second was saw me drawing and illustrating the portraits of the boys. The whole work, realized on large size printings, has then been stuck up on the external walls of the detention home. It has been a collective work that required a couple of months and was organized into different moments. To this purpose we created a website, so that it could contain every information and confer a unique form on our work. 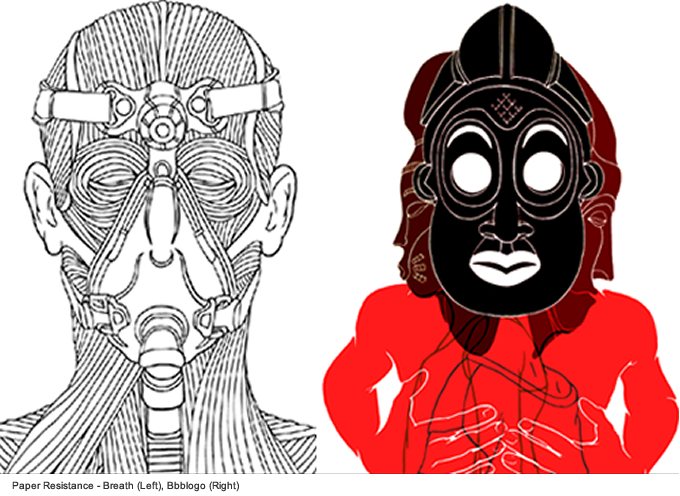 Claudio Musso: Besides being artist, illustrator and activist, you are among the founders of Inguine Mah!gazine review, among the organizers of Original Culturesand you work for Zooo Press as well. Is this the demonstration that today the diffusion of artistic practices have to pass through self-production and self-management? How much do the mixture of various figures and the interchangeability of roles (from the educational plan inside the Academy to the experimental plan in the streets) steer you into research?

Paper Resistance: In my opinion the self-production approach or any independent approach does not concern this very historic period or these artistic practices only. As far as I’m concerned, my attitude towards our everyday life is this. I do not like very much to delegate others, I prefer to create personally. To create a book, an event, or anything else, but to create it my way, maybe even losing money in the process, yet realizing it, following it, attending to his birth, seeing it grow and perhaps even seeing its death.

Many artists think the same, but when it comes to production this is the path I choose. Yet it does not mean it is the only one to be taken. As for interchangeability… I am what I am. I remain the same, but I play more roles at the same time. I only try to infuse into these role as much as experience as I can. And sometimes it can prove useful…