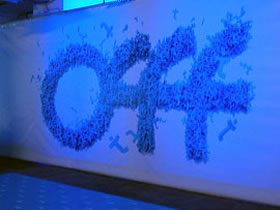 Young and creative people from all over the world, experts of graphic arts, supporters of cultural holidays, hunters of events and excuses to break out of the routine for some days, combining business with pleasure, brought also this year to an early sale of all the tickets, because they have been bought on the Internet; moreover, people took advantage of the low-cost flights. And now they are walking around Lisbon streets, exploring its steep alleys, refreshing in cafés, crowding small hotels with a view; then, they meet again at midday at LX Factory to share passions, experiences, emotions. This is the distinctive feature that will accompany OFFF forever, since it is written in its public’s DNA.

It is a pity that, for those who were accustomed to the more formal, comfortable and well-prepared spaces at the CCCB in Barcelona, this time the so much expected event was a really difficult experience.

The spaces in the ex-factory were large but not enough to contain the huge crowd (this year an average of 2500 people a day, 1000 more in comparison with last year’s festival, took part in the event); the poor ventilation raised the temperature unbearably and “melted” the garden chairs which opened like a bearskin, making them useless; the floor soon filled with spilt beers and orange sodas, but the dim light did not let people who, having no choice, sat on the ground realize that in time; the bluish light made the sheet of the programme illegible, which because of the colours chosen for font and background lost completely the contrast (or elsewhere it had a too little point size also in an intense light); then, columns and metallic structures supporting the lighting further reduced the visibility of the projections, in spite of the several widescreen televisions.

Ceilings were not so high to be able to install too wide screens, so too many heads hid at least their inferior half. Those who found a place in the front rows did not leave it for all the day. The other people had to make do with screens which were set up in spots that were far from the stage (the first day they could not see their favourites, who were then filmed by a television camera in real time), sometimes had no sound (this problem was solved from the second day) and sometimes people could not hear anything because of the noise.

The acoustics (at the beginning of the first day really bad and then improved) were certainly not favoured by the fusion of the open room, and above all of a very busy coffee bar, with the space that was devoted to conferences, and the unacceptable hum was worsened by continuous “migrations” of people who were exasperated by the heat or were looking for a better place from where they could see and/or hear something.

A solution to improve the listening was to use the headphones with the simultaneous translation, even when they were not necessary, but they did not pick up the signal out of the large but very crowded and stifling area near the stage, where a bit more visible screens had been set up.

The “Loopita” space, which was devoted to concerts and because of its public was less frequented, thus became a happy haven where to relax. However, because of its resemblance to a social centre which aroused less awe and respect than the elegant Auditorium at the CCCB, people continued to come and go and, even worse, talked loudly all the time, turning the electronic performances into a mess of irritating noises. In short, it was impossible to concentrate, to enjoy oneself and to become enthusiastic as it had always happened during this festival.

As every year, the approach was interdisciplinary: web, graphics, data visualization, motion graphics, music, generative code, interactive design, typography (in this field young Alex Trochut stood out and made the visitors fall in love with his modesty and imagination).

But actually also the programme worsened, because the “same old” people performed (Eric Natzke, Joshua Davis, Hi-Res, for example, who were professional and pleasant as usual, but now too known for the regular visitors of the festival), and there were impeccable design agencies, which were though less exciting than the lovers of digital art and new creative paths would have wanted to see. Maybe the difficult conditions for the enjoyment contributed to give this impression.

Also the Mercadillo disappointed the visitors: very little music, no books (in Barcelona several specialized bookshops were represented and it was impossible to resist the temptation to buy something), no new hardware products to try (like last year’s screen/graphics tablet by Wacom).

We hope that, during the next festivals, the event, it does not matter where it will take place, will try to return the affection and the attentions of its faithful visitors, taking into higher consideration the conditions it needs for a correct use and enjoyment, so that it will be worth spending money for the expensive ticket and the possible trip.

For this year, the impressions that remain are to have been on a good trip and to have lived new synergies, but also a sensation of having lost something and a kind of nostalgia. Maybe is it the famous saudade that saddens the Portuguese soul and inspires the Fado?.