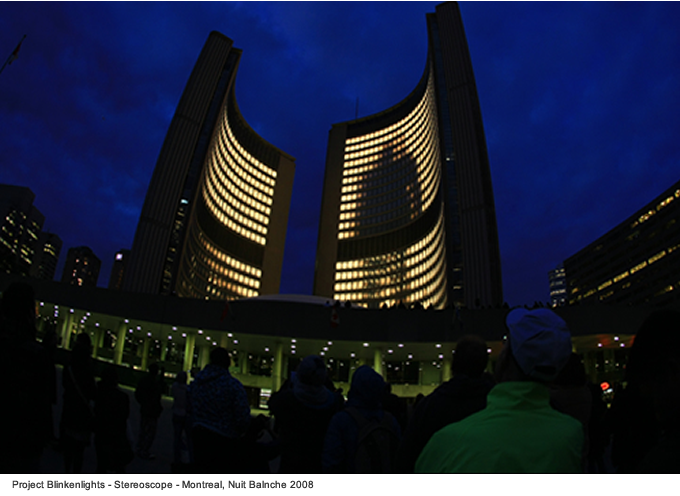 The analysis depicts international media facades with their different artistic, social or brand messages up to interfaces like iPhone Apps or brain sensors for public participation.

During the day, facade structures with their windows and material combinations grant a specific building image to the public. However, after sunset electrical light is the medium for an architectural image. The light appearance sends an atmospheric signal to the citizens like hang on in front of an asleep structure, look at an inviting but static facade or enjoy a vivid architecture sharing short stories.

In the last decade, media facades have become a widespread element for luminous tweets. They establish a network between the building owner and the citizens, sometimes driven by aesthetical debates, other times by commercial intentions to avoid traditional light advertisement.

The pursuit of persuasion by way of big screens gives the impression that size receives a higher relevance than content, comparable with the large amount of trivial tweets in Twitter. Various media facades appear as monumental monologues repeating a fixed animation daily.

A few facades use signals from the environment and transform them into a play of light and shadow. Others emerge as urban dialogues when buildings show combined moving pictures. Some even allow people to send tweets to the building to receive luminous retweets. They turn the city into a community following the dialogue and with the respective Apps may possibly even gain a following community worldwide.

Technology: From flourescent lamps to LEDs

The rapid development of LED technology in the last decade led to major changes in media facades. Small strips of LEDs have been embedded in sophisticated facade elements to enable an integration of light in transparent facades (T-Mobile Forum, 2004).

The fascination with the large colour space for RGB LED installations induced numerous light projects where the display of modern technology has become more important than the visual content and the appropriate use of colour. Further, the tiny and powerful LED pixels opened the way for high-resolution screens – starting with plane screens and extending to 3D screens to keep track of round architecture (A.AMP, 2008). 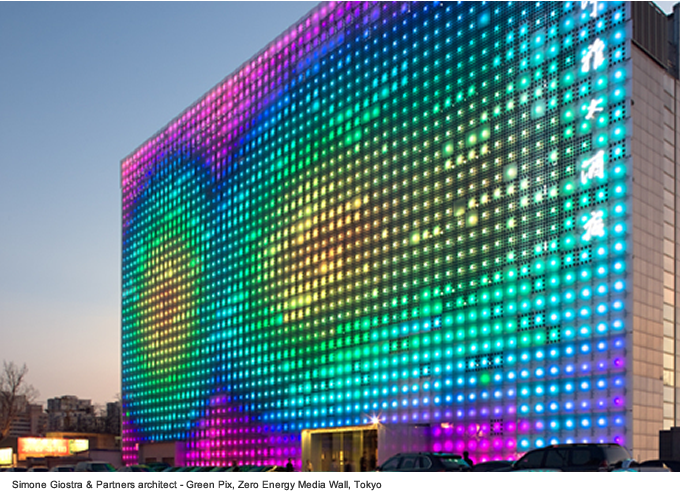 Former facades using linear or round fluorescent lamps were characterised by low resolution animations with their own aesthetic of reduction (BIX, 2003). First and foremost, installations include photovoltaic technique to convert the sunlight into nocturnal illumination to compensate the energy demand of ever growing media facades (GreenPIX, 2008).

Temporary installations have made use of strong video projectors where the facade stays untouched and the building surface becomes the cinematic canvas..

Parallel to the progress in lighting technology, engineers started to create new interfaces for their computer-controlled installations to facilitate public interaction (Blinkenlights, 2001). Mobile phones became an easy to use instrument to send text messages or utilised the keys for specific functions. 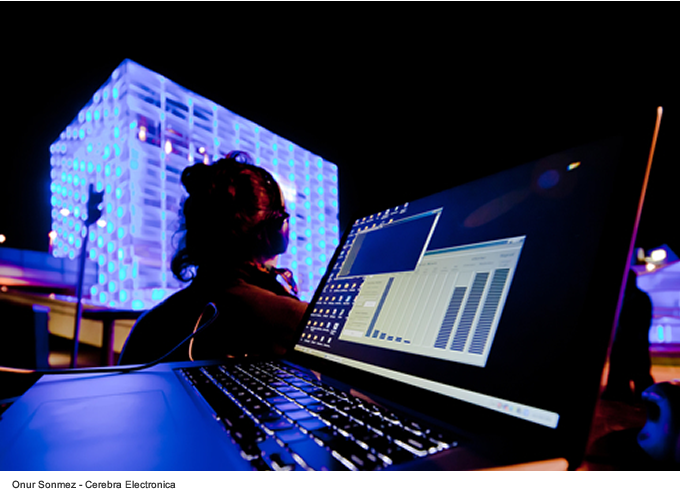 Customized iPhone Apps enabled broadcasts in real-time and made local animations available worldwide (Stereoscope, 2008). Additionally, mobile phones with a camera could even benefit from luminous facades with a QR Code for augmented reality (N Building, 2009). First tests with BCI_Brain Computer Interfaces, measuring neuron activities in the brain for triggering light scenes, allow a vague picture of how unconscious actions and private enlightenment could direct public media facades in the future (Cerebra Electronica, 2010).