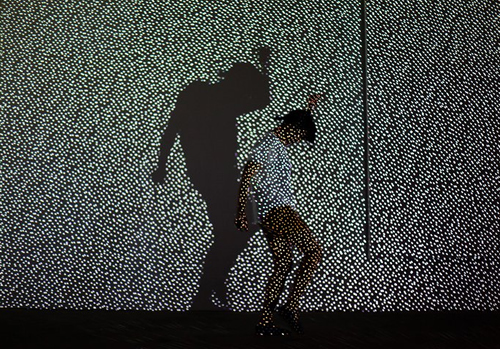 Lindsay Howard is the director of 319 Scholes in Brooklyn, New York, a space which presents and encourages conversation revolving around digital art, in the form of exhibitions, workshops and live shows. The gallery’s philosophy is based on a non-disciplinary approach to examine technology and its effects on our communities, relationships and the body.

Grounded in the belief that art is the best way to navigate the potential of networked culture, 319 Scholes’ aim is to cultivate challenging and experiential modes of engaging with new media.  Lindsay is one of the forces behind 319 Scholes and in the past year, has curated some incredible exhibitions both inside and outside of the gallery.  Her exhibitions include the New York edition of the Speed Show presented as part of Internet Week New York, the Blip Festival Gallery and “Getting Closer“.

Her exhibitions focus on the contemporary relationship between artistic creation and technology, with artists such as Rafael Rozendaal, Francoise Gamma, DIS Magazine, and Nicolas Sassoon, as well as searching for new ways of bringing Net Art into physical spaces.

We talked with her about how the Internet is transforming not only the artist’s, but also the curator’s process, as well as creating new possibilities to play with traditional concepts of exhibition and curatorial practice. 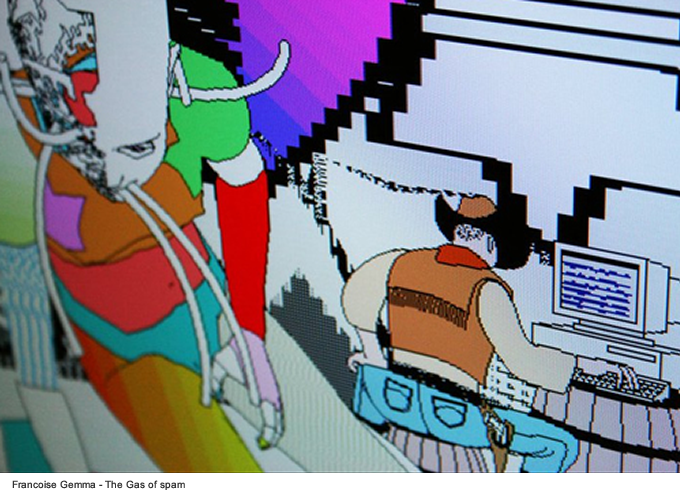 Silvia Bianchi: I was very impressed by your “Wallpapers” projects. When and how this format was born?

Lindsay Howard: I had been following Nicolas Sassoon and Sara Ludy‘s work online, individually and as collaborators, for awhile. Last January, I selected a video by them called Headquarters for “Getting Closer”, an exhibition I curated about intimacy and the internet. I noticed a theme developing in their work revolving around interior spaces, home and architecture. To give some examples, I was really interested in Nicolas’ Home/Land Studies #2 and Sara’s Transience image essay. I contacted them to ask if they had something in mind for physicalizing these collaborations, they responded positively with a series of sketches, and I invited them to 319 Scholes to make it happen.

Silvia Bianchi: I noticed you worked with Nicolas Sassoon for Blip Festival, too.  How did you work on curating Blip Festival Gallery?

Lindsay Howard: The organizers of Blip Festival approached me about curating an exhibition to accompany the performances in New York. I saw a parallel between the musicians performing at the festival and some of the artists whose work I’d been seeing online; both were using technology that most people would consider obsolete in order to create something new. I looked to Marshall McLuhan’s quote: “Obsolescence never meant the end of anything, it’s just the beginning” as I selected works by Nicolas Sassoon, Sterling Crispin and Alexandra Gorczynski.

We listened to some of the Blip Festival musicians together, and discussed how the exhibition would co-exist with the rest of the activities at Eyebeam.  For example, Sterling Crispin’s piece displayed a progress bar at 48% right where people entered the space.  It appeared to be completing over the course of the night, however, the tension mounts when you realize it’s in a constant, frustrating state of stasis.

The challenge of curating an art exhibition for a music festival presented a unique opportunity:  how do we engage an audience outside of a typical art-gallery experience?  The works I selected were highly aesthetic and immediately accessible, so as people walked through the space, the pieces made a quick, strong impact.  I have noticed that curators of online galleries tend to use a similar strategy. 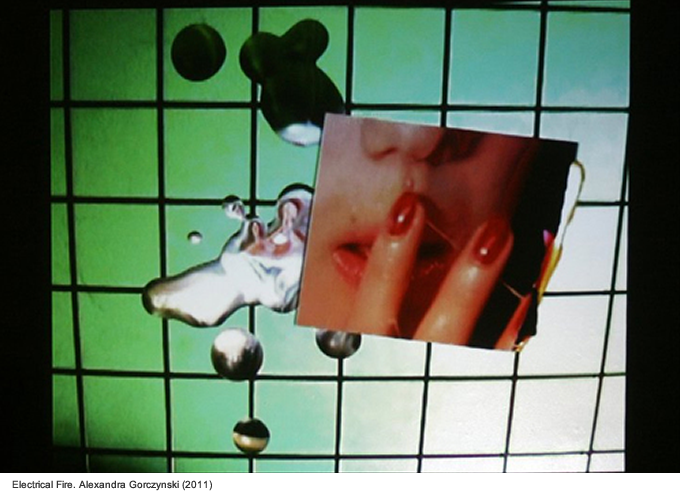 Silvia Bianchi: Talking about “Wallpapers”. I was impressed by the static and at the same time moving nature of the installation.  I think that they’ve found a way of transforming space in an immersive gif. Do you think that this immersive nature helped the audience to understand the artwork?

Lindsay Howard: The installation definitely made me see animated GIFs in a new way!  It was like an IRL “zoom” feature, which inverted the scalar relationship between screen and viewer.  Nicolas and Sara were at the gallery for a week prior to the exhibition, doing various light tests and customizing the projections.  They really found creative ways to highlight certain details of the work that you might not notice on the computer screen, such as the way white pixels are composed of red, green and blue sub-pixels, a fact which becomes clear when they are projected at large-scale.

Silvia Bianchi: Do you think that interactivity is a good way of showing digital stuff in a gallery context?

Lindsay Howard: This particular show didn’t incorporate any direct interactivity, however the environment it created encouraged a sense of play.  I’ve been reading Pat Kane‘s The Play Ethic, which has me thinking about galleries in a new way.  The gallery does more than provide a contemplative distance for works, it allows for a collaborative experience of interpretation.  Play, and interaction, can create a unique sense of “being together”, breaking down diversity and differences. 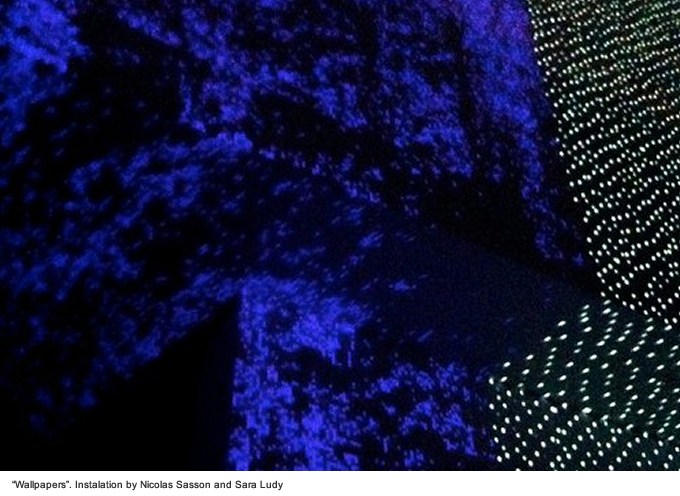 Silvia Bianchi: Do you think is easy to show digital stuff in New York?

Lindsay Howard: There are a number of artist-run spaces in New York that are becoming increasingly interested in showing digital art, in addition to spaces that have been long-time champions, such as Eyebeam.  Honestly, though, New York is all about making your own opportunities.  In June, I curated “Awareness of Everything”, a Speed Show exhibition that took place in an internet cafe. The Speed Show exhibition model, much like BYOB, doesn’t require the curator to have a gallery, equipment or any installation materials. There aren’t as many obstacles as you might imagine.

Silvia Bianchi: I think that in some way your curating projects are focused in the creation of  “real life moments” to show computer-made artworks and connect artists.  What did you discover in this year of hard work ? Do you think that gallery will become sociable places?

Lindsay Howard: I hope so!  I was really encouraged by what happened at the opening of “Dump.Fm.Irl”, a show I curated last October featuring works by users of the image-sharing website.  The evening started like a typical opening but by the end, people were dancing in the projections, taking 3frames of themselves interacting with the pieces, and all of that.  Later, Mark Tribe told me his Art of Curating class at Brown University looked at documentation of the opening, the same week they were reading about Relational Aesthetics.  In this circumstance, the vibe was intentional because I curated an online chat room; casual relationships and conversation were an inherent part of seeing and understanding that specific work. 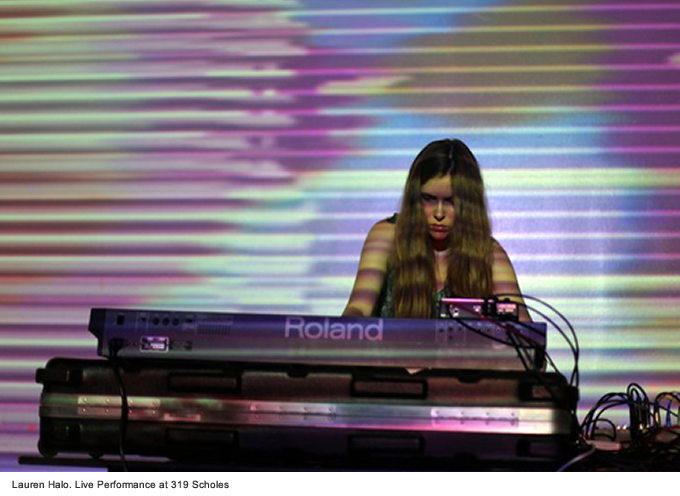 Silvia Bianchi: Could you tell me something about your future projects ?

Lindsay Howard: I’m going to be releasing a new show with Parallelograms, an online publication that commissions web-based projects, as well as writing a text for an augmented reality exhibition curated by Krystal South for the Portland Art Museum. I am also working with guest curators to bring a year’s worth of exhibition programming to 319 Scholes in Brooklyn.  I am energized by the versatility of the exhibitions, all related to the internet and new media, which, for me, testifies to the vitality and broad range of concerns and aesthetics within this emerging community.