The Sublime And The Vulnerable. The Art Of Carrie Mae Rose 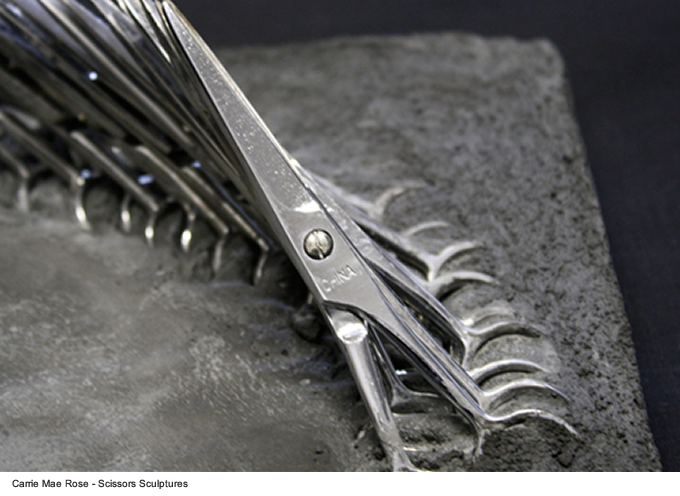 Invented by the famous, controversial and brilliant scientist Nikola Tesla at the end of XIX century, the “Violet Ray” became a popular tool of healing in electrotherapy. In the thirties it was said that the discharge of electrical particles of a violet color emitted by the device could cure ailments ranging from back pain to the effects of anthrax.

Edgar Cayce, the father of holistic medicine, strongly recommended its use, until the Food & Drug Administration forbade the sale after the manufacturer had to pay compensation for damage caused using this instrument. A few decades later, however, the “Violet Ray” came back. It began to spread through its derivative tool called Violet Wands, an electrical stimulator that became popular in police departments and S&M communities. In fact, thanks to the control of its various degrees of intensity, electric discharge could be applied at low voltage with variable intensity ranging from stimulating pleasure to permanently damaging the body parts affected.

It is around these magical objects that the latest aesthetic and conceptual work of Carrie Mae Rose takes place. Sculptor, performer, interactive designer, she is best known for her work Wearable Weapons produced during a residence and fellowship at Eyebeam in New York. Sharp collars made of blades, corsage built with upcycled scissors and razor blades confiscated at the Transportation Security Administration of airports: these objects push the limits of modern fashion design. 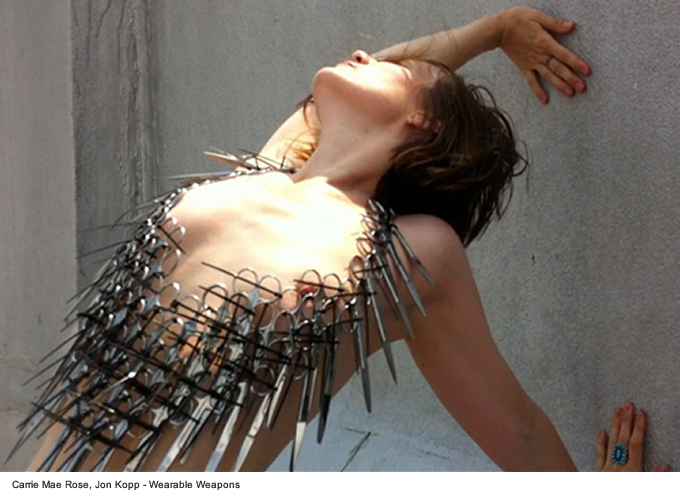 A dual beauty that can hurt, injure, but that can be also vulnerable, Carre Mae Rose describes her projects during our interview as follows: a set of objects and sculptures exploring the boundaries between fashion and fetishism, pleasure and pain, aesthetic attraction and repulsion.

A series of contrasts and conflicts become evident in all her work, from the Scissors Sculpture series – large-scale sculptures and installations exploring the concept of “vulnerability” even more deeply, and so important to this visionary artist / designer – to the work revolving around the aesthetics of Wings, wings made of blades and scissors representing the collision between the emotional fear of the sharp metal object and the heavenly element of “air”, almost angelic …

As Carrie Mae writes on her website: “My wearable weapons, agave armor and interactive costumes awaken the power of vulnerability. Devastating beauty that could kill. These items push the boundary of fashion to the absolute limit. This work investigates the charged intensity of our current epoch with natural disasters, global environmental degradation and war and explores the cultural edge and choices we each have to make to destroy or transform. These pieces explore the role of the feminine in our cultural of militarization and speak to the influence it is currently having on trends in pop culture, education, entertainment and high-fashion.” 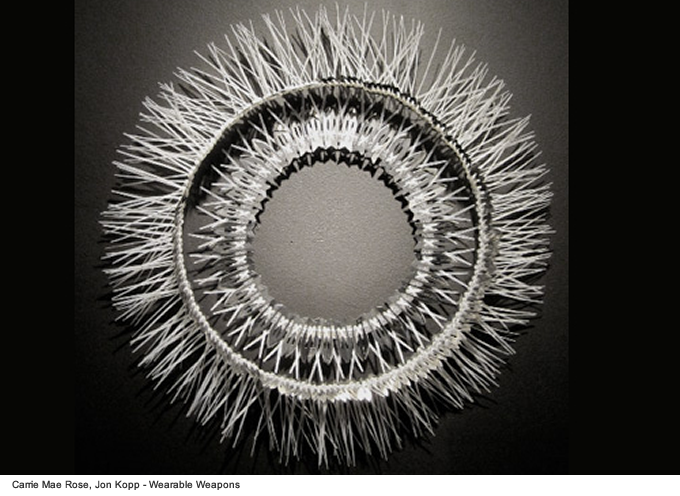 Zoe Romano: How would you describe Carrie Mae Rose in a sentence?

Zoe Romano: As you declared in a previous interview, your main interest is vulnerability, in which way do dresses and accessories help you express this concept? Why do you see the human body as a symbol of vulnerability?

Carrie Mae Rose: When I speak of vulnerability, I also speak about the other half of the equation which is protection. We cannot have one without the other; they define each other. Wearable Weapons began by exploring themes of personal intimacy and the dynamics that mark intimate relationships – the need to feel safe and protected when being vulnerable and the delicate boundaries between opening up and the chance to be hurt.

I am fascinated by the concept of devastating beauty. Something so beautiful that it can create a big opening. The hurts-so-good kind of feeling. This quality of intense vulnerability and opening feels like burning to me and this is why I like researching and building using electricity and fire. Dresses and body decorations for the feminine body add another element of juxtaposition between the soft skin and the hard, sharp or dangerous materials used.

I like this edge. Women have been historically labeled as both nurturing and dangerous, both goddess and whore. I like representing both the softness of the Vergin Mary and the fierceness of the Goddess Kali by decorating the naked female body with razor blades. Also, for me there is a way to reach the sublime by taking the risk of being vulnerable. My body is a physical vehicle that currently can bring me to this level of ecstasy and that is vulnerable to death and decay.

Zoe Romano: It’s usually more common to think about garments as shields to defend our body and not as a weapon to attack. How did you develop this point of view?

Carrie Mae Rose: Initially I started using the term ëweaponsí because it had to do with the confiscated scissors from airports that the government had defined as ëweaponsí. I was using the term somewhat ironically. Wearable Weapons is currently inspired by the question: If the Gods wore armor, what would the substance of their armor be? My answer is Fire. Pure Fire. Pure intensity and impenetrable burning density.

I decided to represent this Fire-of-the-Gods by using real fire and electricity. These Wearable Weapons are built to provoke and inspire and protect who wears them. They do not attack. When one is interacting, wearing or handling the pieces with respect causes no injury. If one is not cautious or aware then yes, then they can cause harm. 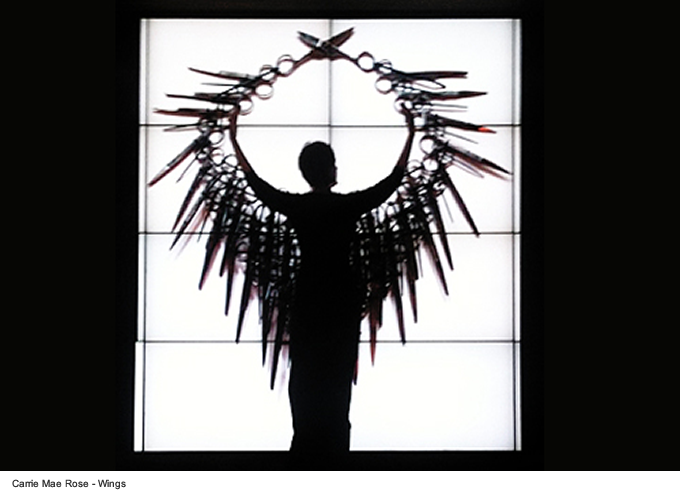 Marco Mancuso: Looking at the Wings project, it seems that your conceptual approach is to create a strong counter-position between the “dangerous” objects (scissors, razors) that could be the weapons, and the “pure and celestial seed wings” of your angels (as you said in your website). Is this the main idea behind this project? And again, is there any correspondence between the physicality (cold) of the scissors and the ephemeral (warm) idea of flying? What inspired you in creating Wings?

Carrie Mae Rose: I am continually drawn to the reoccurring theme of wings in my work, which for me are a symbol of freedom, power and spiritual longing.  I have a constant curiosity to rise above the mundane and get a bird’s eye view, a higher perspective, of my life and of the larger world.  The initial inspiration for my first large 9ft wing sculpture (Ascendent-See) was a trip I took in 2001 to the place of my early childhood.  I had an experience where a small bird died in my hand and I knew intuitively that if I did not leave quickly my wings too would be broken.

I saved the little bird’s wings and digitally stretched them to be the outline for the Ascendent-See piece below. Then, unplanned, this piece became the perfect size backdrop for me or friends in front of which to stand and take photos of ourselves with wings. Ascendent-See has small googly-eyes epoxied around the edges of the paint to represent the omnipotence and the expanded perspective of Angels and other flying creatures.

Each time I work with new materials I always want to turn them into wings.  I made them with agave leaves when that was my main inspirational material

There is definitely an edge I like to play with.††It is part of my spiritual longing. Building circles, wings and armor/weapons (for protection) have been my main themes, all of which ultimately refer back to a deep desire for wholeness, freedom, and total safety. †For me, opening to spiritual realms†is the ultimate protection.† My†work offers the message that the only real protection is spiritual protection. †Physical weapons are a false promise. † 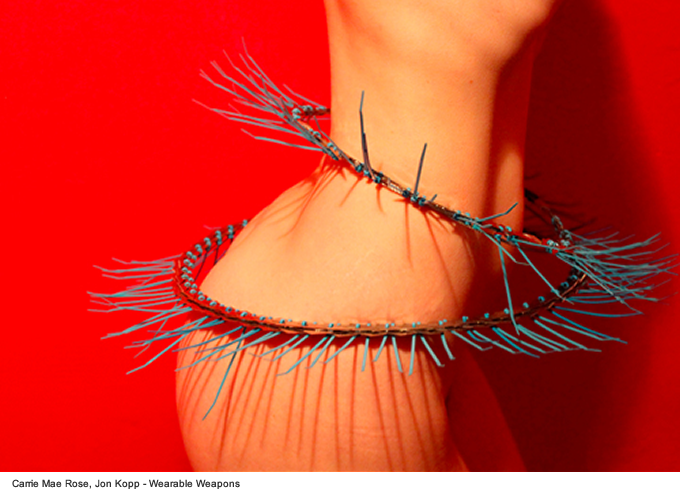 Zoe Romano: Your latest work is based on Violet Wands, kink stimulation toys applying electricity to the body. How did you get fascinated by them and in what way are you trying to explore them by hacking them?/p>

Carrie Mae Rose: I began my newest concept drawings for Wearable Weapons (Fire-of-the-Gods Series) with a dress of fire and wings with electrical arcs. As I began to learn about electricity, I thought that working with Violet Wands (which were initially invented in 1893 by Nicola Tesla in the form of the Violet Ray) was the safest place to start. I am inspired by the delicacy of lace and Elizabethan Collars. I plan on building a safe portable wearable electronic armature that will give off voice-activated mini-pulses of electrical arcs from illuminated filigreed glass electrodes plugged into Violet Wands.

The costume will protect the wearer from the electrical shocks by a thin fabric Faraday cage knit with conductive fabric. I solicited one of the main distributors of Violet Wands http://violetwanda.com and she graciously donated a dozen Violet Wands and a large assortment of internal and external electrode probes. She suggested that I design my own electrodes that will be filled with Argon gas. This is a very exciting new direction that I am pursuing. See the image below for some electrode design possibilities. 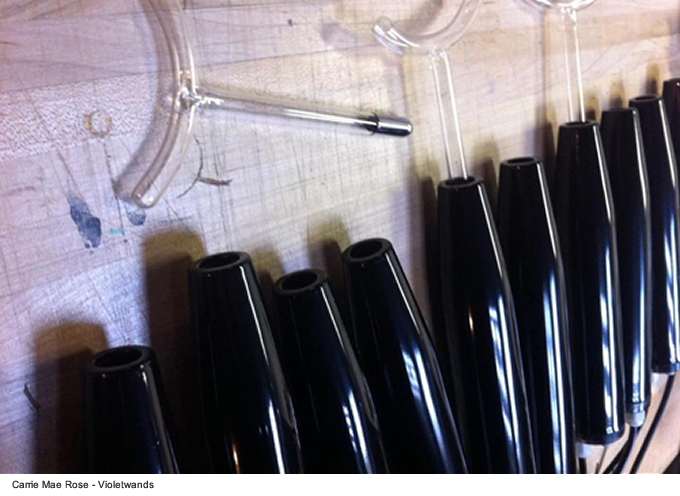 Zoe Romano: At the beginning of your career you wanted to be a fashion designer but after studying it and working for 9 months in a fashion house you realized it was not your thing and you preferred art. What were the expectations you couldn’t meet?

Carrie Mae Rose: It was not the expectations I couldnít meet, it was about the part of me that felt limited by the traditional constraints of fashion. I love the freedom of being an artist. I love to sew but I also equally love to sculpt, weld, solder, hammer, sand, cut, and create with metal, wire, zip ties, glass, clay, fibers and an assortment of recycled objects. More recently I have been studying how to build with technology through coding, sensors, micro-controllers, laser cutters & 3D printers.

Digital tools are definitely being integrated into the fashion world and I am inspired by Iris van Herpen (http ://www.irisvanherpen.com/) and Christopher Kane’s use of laser cut materials.

I feel artists are meant to challenge cultural assumptions and to provoke and awaken people through innovation and awe. My most recent, inspiring recent moment was watching this video of the Solar Sinter Project by Markus Kayser – http://vimeo.com/25401444. This project blows my mind!! It is a great example of an artist inventing a new technique that can potentially be applied to many more future ideas. I like that as artists and inventors, we do not carry the constraints or weights of other classic fields like science or fashion. I can be cross-disciplinary and intersect fine art, fashion, technology, science and performance. 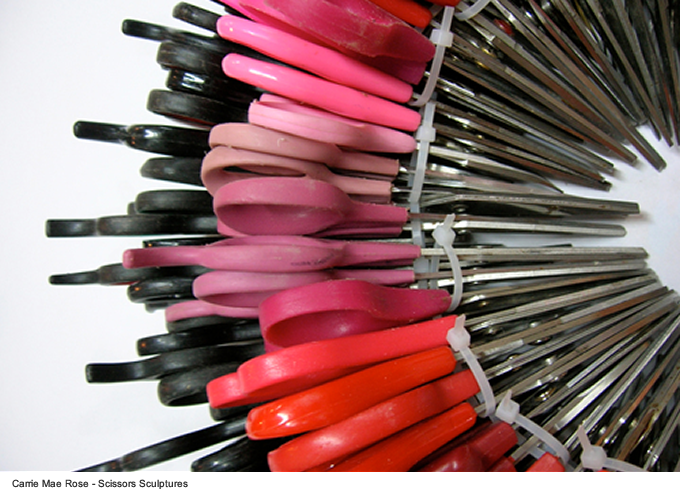 Zoe Romano: In the last ten years the situation in the creative sector is getting worse. Public cuts and financial crisis are making it more difficult to work in this field. What’s your experience with this? Can you make a living out of your art or do you have other side projects helping you pay the rent? Are you making merry crisis plans for the next years?

Carrie Mae Rose: Something inside me has to create art. I donít really have a choice. I was once told that there is a shortage of good ideas not funding. This has been true in my experience. I believe that, if someone has a strong, clear vision, there is always a way for it to manifest. My current Residency and stipend at Eyebeam (http://eyebeam.org) has offered invaluable financial and emotional support to this phase of Wearable Weapons. It also takes stubbornness, patience and truthful supportive friends and family to continue.

I am always feeding myself inspirational stories of how others have persisted and not given up in the face of difficulties or challenges. I meditate often and I would never be able to live in NYC and pursue my visions if I did not have a daily Connection experiences to re-charge me. This inner solace is the wind beneath my wings.