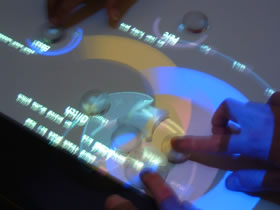 “I figure that the listener requires about half of what you think you require when you’re the creator,” says Brian Eno. During festivals I often hear artists and organizers say “digital art is for few people”. The exhibitions numbers (affluences, sold specialist books or DVDs, software licenses etc.) seem to confirm this statement. But is it entirely true? Is really creative digital art for few people?

Obviously not. Nowadays digital is an integrant part of mainstream culture. Let’s think about chat lines, mobile phones, video games, films entirely made up of digital effects, remix culture, television, personal computer, Disneyworld like virtual reality, electronic gadget culture. We can’t even say the audience doesn’t like digital creativity, let’s think about how new technologic wonders are welcomed – above all from the youngest people. And there it comes “But you can’t call it ART”. Add the presumption of knowing what art is to the presumption of being artists, even if minor or underestimated artists. Maybe that’s because digital lacks on stage experience? The important thing in rock music is to communicate with the audience but even the dj is a good dj if he understands and leads the audience mood. We don’t have to forget the music the dj plays has been conceived and created by other people with the same means currently used in digital art: a personal computer.

So the difference is in the first case the artistic digital product is tested to the public through the dj figure while in the second case what is judged is the theory behind the product. This is the cause of a general incomprehension of electronic art and one of the reasons for it’s so difficult to find funds for the typical “digital art” projects. Isn’t it a paradox telecoms try so hard to find new languages and uses for the digital  obviously to make money  and they don’t find them? Isn’t it a paradox that multimedia producers look for new paradigms (to sell of course) and they don’t find them?

This is not at all contradictory  as the best engaged artists currently do  to make politics and alternative culture in the digital world. It’s contradictory and very snobbish to think of succeeding without compromise oneself a little. The actual digital scene perfectly reflects the mainstream pop scene in a reduced scale. There are few innovators (maybe 5%) and the others imitate. It’s not weird: imitation is a powerful cultural machine. Our own emphatic perception has imitative basis: neurons copy, emulate the emotion we felt. Two of the successful strategies of craftsmen have always been imitation and improvement. If we’re elaborating new languages it does make sense the use and the re-use of the existent, even videogames have successfully developed an extremely complex language through few evolutive jumps and infinite improvements. Creative Commons are laying stress on this, let’s see.

The objection these artistic products are too complex to be available to everyone seems to me only a wrong towards filmmakers and videogame creators. Then if we put the stress on technologic novelty only we don’t have to be surprised if the interest merely lasts since the next special effect. The problem here is a communication one also (or better a problem of the communication culture as Perniola would say.)

So what the so-called “digital artists” can do about snobbish crisis, sense of abandon, marginality, technologies that often overwhelm for their complexity and speediness? Has digital art to be intended as abstract art of the eye, algorithmic code, and expressionistic supremacy of the gesture, of the hand, of the case or as a third Baconian way? When the digital art is completely entrusted to the concept, to the code, it gets closer to abstractionism. When it completely trusts to interactions it becomes expressionism. The challenge is to find a third way, with craftsmen humility. Let’s come back to perception, to what happens after or through the interface, from the machine point of view but from the point of view of the audience too. Let’s use technologies and knowledge to reach the audience through his perception (or his manipulation) and not for writing demonstrations of theorems on the blackboard. Let’s learn from the audience. Let’s ask ourselves where the vertigo of some digital generated images or sounds come from: Do they come from the formula or from how people perceive them? I vote for the second option and about the first I don’t care.