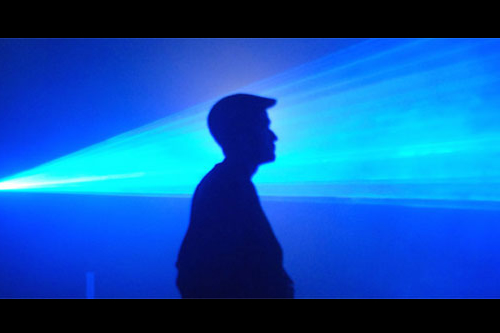 Artfutura has just turned 20 (a really venerable age for a festival on such a topic). It celebrated its birthday at the IMAGINA building in Barcelona.For people thinking they were going to miss the traditional Mercat de le Flors (in fact this would have surely been a more adequate location for it) it has in fact turned out to be amusing to attend this festival in the famous catch@22, the district of innovation which has been the subject of a series of debates, an area still gutted due to never-ending work-in-progress but already with a futuristic stamp.

Too bad about the constant broadcasting of football matches by golTV on the maxiscreen located at the entrance which did not create the proper atmosphere for a cultural event. And too bad as well, about the numerous, never-ending sound and video technical problems and the incoherence of the lighting system. These things should work more than well on the occasion of a festival about future technologies.

As has always been so for the last 20 years, it is continuously trying to overcome dichotomy, to investigate the spaces lying between opposites which is where the seeds of innovation swarm or, to use Stelarc’s own words, “where intelligence resides”.

True to pattern, the festival was made up of conferences, exhibitions, audiovisual projections, contests (Siggraph, Vida, 3D ArsFutura), ceremonies and parallel events, but this time some of them were held at the IMAGINA building, and others at the Santa Monica Centre of Arts. The event opened with a FlashMob by Improv Everywhere, which was coordinated by an mp3 file downloaded from the WEB and which was broadcast simultaneously in four Spanish cities: Barcelona, Madrid, Murcia and Vigo. In total around 1800 people participated, dancing in the freezing cold while performing collectively in the middle of the more crowded streets for 45 minutes.

Then, the opening of the garden of sculptures by Sachiko Kodama was celebrated at the Santa Monica Centre of Arts. We had already seen her at Maquìnas & Almas, but we never grow tired of her works of art, kinetic sculptures animated by the magic of ferro-fluid. The exhibition will last until the 15th November … it is warmly recommended to those passing through Barcelona. What’s more, it’s free.

Also the first day of conferences was free. Because of the seating capacity, booking was made compulsory but the hall remained half empty even though every seat had already been booked some days before the opening day; thanks to the behaviour of many people, this free-entry is something which will probably not happen again.

It seems that, even when talking about art, people seem to prefer giving more value to something they need to pay for and they do not care at all about others who want to participate but are prevented from doing so because all the seats are already booked. The three days dedicated to conferences, widely documented on the web-site of the festival together with the ones of the speakers, welcomed three particularly interesting and inspiring meetings.

The first one, light-hearted and amusing but also conceptually deep-rooted, was the one with the breezy Multitouch Barcelona, already seen at OFFF, and the pupils of its director Hèctor Hayuso. They were interviewed by Marvin Milanese. The interview can be read on Digimag 46 July-August Issue (http://www.digicult.it/digimag/article.asp?id=1519). Their work is totally focused on the humanization of technologies. They don’t like saying “user”, they prefer the word “people”. They don’t like saying “interface”, they prefer the word “experience”. What they are trying to do is not to allow technology to cool people off; on the contrary, they try to make people warm up to technology by filling it up with sensations and emotions, by invoking the senses and physical participation.

That’s the reason behind their human interface (Hi, am a real human interface), their touch-screens where participants have to interact with one-another in order to instigate human relationships, whereas, on the other hand social networks create virtual links not comparable to real ones and which, most of the time, don’t end up coming true: is an embrace sent via Facebook a real embrace? They don’t think so at all.

In order to highlight their view, after their enjoyable presentation, they gave the audience of ArsFutura an experience of their artwork. They handed out some of the 1000 balls left from an experiment held in Lisbon, which had failed. Dani, (an expert in design and multimedia, but also a great actor), disguised himself as a Space Invader and let the audience “kill” him by throwing those rubber balls at him . An excellent demonstration of how something relevant can be realised with so little, by offering an interactive experience which was human at the same time.

The first day dedicated to conferences ended charmingly with the intervention of Enric Ruìz Geli from Cloud9, a sensitive and well-prepared architect. His presentation was, somehow, very close to a performance when he accompanied the video contributions, whose music had been carefully selected, with comments similar to sound-poetry,. Pictures from a digital camera sculpting a marble block became thrilling too and we must not forget to mention his research on bubbles, assisted by the artist Pep Bou.

Enric wants the products of architecture to be like soap bubbles: ephemeral, so as not to waste future generations of architects, not to stand still under the weight of history, as happens in Italy. This is, nowadays, a controversial subject which is particularly significant for those who love and respect history and archaeology but, at the same time, do not want to prevent the evolution of time and the advancement of technology. The co-existence of both these dimensions in human culture can be difficult and it requires considerable sacrifice.

The artworks by Enric are created using light-weight, intelligent, and autonomous materials; materials which are able to generate energy, to capture and give back light and warmth, to create regenerating landscapes. Like, for example, the SED salt pavilion presented at the Saragozza Expo, the only one without air conditioning or the MediaTIC in Barcelona, still under construction, covered with cushions which change their shape automatically to maintain the micro-climate.

In the wake of Gaudì, the main objectives of Cloud9 are a respect for nature and biomass, ecology, sustainability, self-sufficiency and the attempt to achieve 20% of total energy consumption coming from clean resources by 2020, as envisaged by European law, otherwise the penalty would be the ridiculous sanction of buying CO2 emissions from Africa.

And, last but not least, the festival allows its audience to admire the works of Boolab, commented by Coke Ferreiro and Lucas Elliot. This production agency, strongly contaminated (in the more positive sense of this term) and born in 2004 as a branch of Booker is evidence of how important it is, nowadays for companies to invest in research and development. In a short period of time the son overtook the father, and the agency became an award winning production studio which was much more in demand and is now recognised on an international level and cited as one of the 20 best ones worldwide. Great names of the calibre of Joshua Davis and the Dutch animation studio One Size have been incorporated into the studio recently.

The original field of action of the guys from Boolab was advertising and they move freely from craftwork to hyper-technological stuff. They immediately stood out thanks to their ability in the field of emotional manipulation, for their elegance and their aesthetic sensitivity. Their adverts are original, dynamic, beautiful, and permeated by art and culture (they wink at Escher, Hitchcock, Warhol, Cervantes…). Even though they always involve different kinds of professional people (animators, directors, editors… always the best ones available in this field), they always make their own distinctive personal mark.

Boolab is now leaving the field of mere advertising because they want to extrapolate the audiovisual dimension from the screen. This is possible today thanks to technologies which are more and more interactive. They allow the active participation of the audience. So besides experimenting in the field of TV, in the music and cinema industries and in the world of fashion and culture, they are also the authors , for example, of the incredible Roca show-room (a well-known brand of bathroom fixtures and furnishings) in Barcelona.

It is an extremely avant-guard location where a lot more attention is paid to aesthetics than to communication because this is what the customer has asked for. Here, water is the absolute protagonist. People can experience rain, intense cold and bathing rituals to be discovered by getting closer to maxi-screens misted over by the vapour.The catalogue may be consulted using an ultra-modern touchless interface; products are shown as if they were sculptures. For those who still aren’t sure about what an “experience” is…it is well worth a visit.