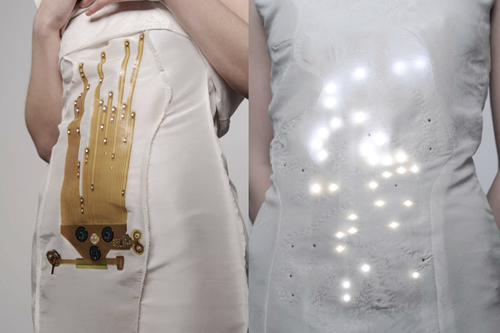 In the “liquid society”, as Zygmunt Bauman defines it in: “Modus Vivendi. Hell and Utopia of the Liquid World”, the structures that create the boundaries of space of behaviour, habits and social and individual forms, are dissolved, creating a chaotic and dynamic context in continuous transformation where contemporary men and women find themselves having to continuously and frenetically pass from social one role to another. Family, work, social life, are alternated until they overlap, despite having different needs and necessities that are often distant from each other.

Every one of these roles requires a different image, and therefore different clothing, suitable to the needs and functions that emerge constantly over the course of the day and the week.

Fashionistas of the future will be new nomads, often travelling, who will have less time on their hands to take care of their look and change their image in relation to the different environments where they find themselves. Even clothing will have to adapt to an increasingly changeable image that alters with altering roles and functions.

To answer to the needs dictated by this panorama, companies and designers are increasingly working with project experimentation that prefigures dynamic clothing capable of responding to the variations of needs and changing in function to moods and external conditions rapidly and practically.

In these experiments smart materials are used that change their characteristics in function to external stimuli. For example, they can change colour with variations of body heat or external light, they can deform, change from transparent to opaque, emit light signals, sounds, and images when needed. Clothing, therefore, is not just for covering up and appearing but, thanks to the miniaturisation of technologies, can encompass technological systems that were once cumbersome and macroscopic, giving way to “transformative” clothing.

The Turkish-Cypriot designer Hussein Chalayan, for example, took technological innovation to international catwalks through the use of smart clothing in high fashion that changed shape and aesthetical characteristics.

Clothing has always had the function of covering the human body, first of all to protect it, but also for aesthetical and social reasons. With the evolution of textile technologies and lifestyles the necessities were multiplied and the function of clothes has become increasingly complex, including new types of functions connected to communication, interactivity, cosmetics, comfort and even the possibility of encompassing pharmaceuticals and phytotherapy elements in fabrics. These functions are obtained through the use of weaves made up of unusual materials such as fabrics made up of metals, sensors and actuators, dyes and polymeric conductor materials, nanofibres, optical fibres and piezoelectric fibres.

With the word smart different types of textiles are described as they are capable of interacting with the environment and with the user: from thermo-regulating textiles, to fabrics with varying permeability, to textiles that emit active ingredients, scents and sounds, to fabrics that encompass electronic and interactive technologies.

The progress obtained from technological innovation particularly in the nanotechnology, biotechnology and aerospace research sectors has taken the textile sector by storm, promoting the creation of a large quantity of new fabrics with highly technological properties.

Among these are the so-called “functionalised” fabrics, meaning that they are created in a way that generates particular properties that makes them capable of carrying out certain functions. Fabrics capable of perceiving and reacting to external inputs, mutating to the changes in external or internal conditions to then going back to their original state.

E-textiles, for example, are made up of conductive fibres weaved with other yarns through standard production techniques that can make t-shirts, coats, jumpers and even rugs or wall-paper smart, making them encompass electronic devices. These fibres carry energy to sensors, actuators and microcontrollers, which function thanks to software that control communication and can send radio signals using Bluetooth technology and other innovative wireless communication technologies capable of reaching cellular phones, organisers, Internet networks or other terminals. The possible applications are innumerable, be they in the clothing sector or in furnishings.

Many of the first experiments came from the military sector, one of the fields characterised by more opportunities for investment in research. One of the first and more renowned examples of smart fabrics being used is the SmartShirt system, created by the Georgia Institute of Technology and commissioned by the American Marines for military use, which was then sold as a license and trademarked by Sensatex to create different types of uses of this technology destined to a wider market. SmartShirt is the name that was given by journalists at the end of 1990 to describe the Wearable Motherboard.

The producers of e-textiles can unite sensors, processors and communication devices with naturally made fabrics or mixed fabrics. The clothing is treated with conductive polymers and metallic fibres for the transportation of data and for energy. The look and feel remain the same when compared to normal clothing, and if they are deactivated and their devices removed, they can be washed in the washing machine. With clothing that has been created with these fabrics it’s possible to monitor the physiological conditions of the person wearing them, thanks to encompassed sensors that the user can position in relation to the function that needs monitoring.

Smart textiles can be used by athletes to monitor their vital stats, and therefore their health, during their sports activities and can also have medical uses destined, for example, to heart patients, people with respiratory problems, and all those people who need continuous monitoring of their physical condition. The clothing communicates vital signs in real time directly to a medical practice, hospital, or other places depending on necessities, and at any time it’s possible to verify the health status of the person wearing the clothing and therefore to monitor them and, if the case should arise, intervene, reducing any risk for the patient with an immediate response.

In the use of professional uniforms, the sensors can be connected to a central unit that communicates when their work conditions are dangerous, for example when there is smoke, emissions of dangerous substances or temperatures reach intolerable levels.

In the Dutch section of Philips Research a technology called Lumalive has been created in collaboration with the Photonic textiles group, capable of emitting luminous images in the fabrics of clothing in a dynamic, variable and manoeuvrable way, by the user. The technology consists of laminating some LED lights inside a flexible polymeric support that emit light in three fundamental colours and inserting the laminate, after connecting it to a electric system control, inside different types of fabric for clothing. The LED panel is covered by some layers of translucent fabric so that the diffused light can give way to homogenous images that aren’t “pixelled” but also to confer to the softness of the fabric.

In this way new sceneries are created in the world of fashion design that serve new opportunities for expression that are offered by mutative clothing that allows the person who wears it to communicate messages, emotion, and expressions instantly and dynamically, through multiple combinations of colour, light, images and textures

Among these intelligent textiles there are fabrics that gradually release substances and active ingredients such as pharmaceuticals or cosmetics that can be absorbed through the skin. With these fabrics it’s possible to create garments for specific applications in the pharmaceutical field such as localised therapeutic treatments and the administering of painkillers or antiphlogistic medicine.

This kind of solution, as well as unifying two functions in one unique material support, for example the protection of the garment and the curative action of the medicine, allow for a more correct assumption of these substances through gradual administration according to a particular need, and assure a fast and easy assumption with less impact on a psychological level as well. The administration of the active ingredients is encompassed in the act of wearing the clothing that, on an aesthetic level, is not indicative of any therapeutic use whatsoever.

These kinds of fabrics are also apt for being used in the sports field so that the athletes’ performance and training can offer better results. This is possible, for instance, by differentiating the materials in sports gear so as to associate different muscles or anatomical areas that need specific kinds of stimuli, with fabrics that release active ingredients with localised and targeted action as needed, which can be anti-inflammatory, relaxing or stimulating.

Among the products that can be released, as well as pharmaceutical and therapeutic active ingredients, perfumed essences for cosmesis or for aromatherapy can be released, that can have a relaxing effect for nightwear, or with anti-bacterial or insect repellent substances.

In the application of innovations such as those described, design, thanks to it transversal “humanistic-technological” formation, is capable of conjoining aspects connected to different categories such as comfort, social requisites, ethics, aesthetics and economical needs, and putting them into the development of a product, thus being able to pass with ease from the scale of environmental and social sustainability of the product system, to the scale of microstructural strategy of the materials.

At the same time disciplines such as material engineering, chemistry and computer engineering are important and precious in applying the processes of technological transfers in conjoining the translation of the concept and innovative projects for products created on an industrial scale.