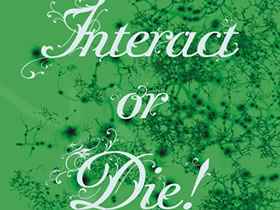 The most important axiom of Palo Alto’s school says “You cannot but communicate”. Thus, when communication is mediated by new media or technology, you might not but interact, unless you want to risk your skin.

Interact or Die is the warning of the ninth edition of Dutch Electronic Art Festival (DEAF), the international art and new media biennial organized by V2_Institute of Unstable Media which will take place in Rotterdam from 10th till 29 th April. By emphazising the unavoidable process of interaction, conditio sine qua non of human behaviour, new flexible interactive models are proposed and analyzed, with their characteristics that cannot be strictly defined, but on the contrary follow ever-changing rules of relation.

Those kind of interactions can last longer and can more easily adjust themselves when compared to classical interaction models: the point is that current issues about economic ecological and social balances  from global warming to migrating flows, from cross-cultural dynamics to globalization processes  cannot be solved using predetermined models of deductive thinking or linear causality. New cognitive fluid interaction models would allow to manage circular cause-effect relationships by discussing what was previously assumed to be true and thus showing different solutions.

DEAF07‘s aim is to show us how those models can be applied differently, in the arts as well as in social scientific and cognitive areas through a concentrated programme in which artists, researchers and scientists will discuss about those subjects together. The discussions will span from technological research in the arts to the planning and managing of social networks, from power relationships and social influences to the self-organization of technological systems and cultural diversification as secondary counter-effects to the globalizing push towards standardization.

The exhibition part will be open by a perfomance by Code 31, an open studio working on the borderline between art and technology research, and will present multimedia works and interactive installations by many international artists such as Graham Smith, Marnix De Nijs, Zhou Hong Xiang and Workspace Unlimited, thus showing a wide range of examples of the contemporary international new media scene.

Among the great many initiatives within the festival  including several seminars and workshops and a symposium among experts  outstanding are those relating to the four-year cooperation with the most important Chinese curators and artists which would be supposed to culminate in the first media art biennial in Beijing in 2008. This year in Rotterdam there will be about twenty people representing the Chinese artistic community, among whom artists, teachers, curators and specialized journalists, who will explain their point of view about the relation between Europe and China, thus trying to make the communication and exchange about art and media world easier. The initiative is supported by the Chinese Foreign Minister.

We would like to remember, among the others, a series of meetings called Snack and Surge which have been organized as brunches during which complex topics such as the concept of open-mindedness, metropolitan turism, city brands, media war and social activism in art will be discussed while enjoying nice food.

Besides, as far as cultural entertainment is concerned, five evenings dedicated to five different subjects have been organized. The programming of the Evenings of , by international curators, will present the Long March of contemporary Chinese art (Lu Jie versus Henk Oosterling), a club night on the concept of play by the Ludic Society, the BlackBenzRace evening (the black Mercedes car as Albanian immigrants’ status symbol) by Knowbotics Research, Paul Koek’s performance dedicated to Dutch poet and composer Dick Raaijmakers, and, last but not least, the party celebrating the 25 th V2’s anniversary with performances by Ryoji Ikeda, Edwin van der Heide, Mouse on Mars, Staalplaat Soundsystem, Maurice Benayoun, Jean-Baptiste Barriere and SSS trio.

Don’t miss the two music shows by STEIM and Today’s art, during which guests such as DJ Sniff, Rechenzentrum and Atau Tanaka will play alternately and which promise a “true Detroit experience” for the concluding night. If you can’t go there personally, don’t feel desperate, because the whole festival will be available live streaming on its web site with the addition of an irc channel to say your opinion too. So, sit back, watch and interact!.

We had the opportunity to interview Alex Adriaansen, DEAF’s artistic director as well as director and fouder of V2, one of the most important historical figures both in Europe and around the world as far as new media are concerned, one of those who saw the birth, development and explosion of these phenomena at social, artistic and communication level.

Marco Mancuso: Alex, since your long experience in this field, I would like to know what you think about technology impact on every-day life, on creation, production, communication and on the market.

Alex Adriaansen: Today, young people in particular look at the world and interact through new media, the Internet, mobile phones, mobile platforms, thus creating the hyper-connected reality we live in. For those who are very young it is often not very clear how media work, since they cannot learn that at school yet. So, if media create the reality we live in, we have to be able to transform them, to play and interact with them, in order to give a way of working and understanding. In V2 different levels of working with media are available, giving the opportunity to research and plan, creating a such a wide knowledge that even big companies use technologies developed by us, with an open source base in which softwares are available to other groups, who are thus able to implement them too.

In V2 we develop big plans for large private companies, but at the same time we develop specific knowledge thanks to our cooperation with artists and other cultural organizations, universities and research programmes. As V2 and DEAF we have been following for years a number of projects relating to the spread of the broad band: In Holland many people use it and that is why events such as DEAF have to provide speedy downloads, event streaming, presentations, music and videos. All that without forgetting the possibility for the audience to interact asking questions and receiving answers. For us files are very important since all our contents are organized in big files of metadata search: our files can be shared through our web site.

Marco Mancuso: As far as museums and cultural institutions and centres are concerned, why is V2 important for them and why are they important for an organization like V2?

Alex Adriaansen: Theatres and museum are aware that technologies and media made a change in people’s habits, in their relations and tastes, especially among the youngest people. So they realized they necessarily have to get acquainted with those changes. Both museum and theatres and institutions are wondering how they can innovate through new media.

We followed a very interesting project in San Peter Square in Rotterdam, where we set up a 90 metre wall where artists projected images of people coming from different parts of the world and when real people walked by, the shadows of their images were projected on the wall too so that they can interact with what had already been projected.

Marco Mancuso: Many private companies cooperate with V2 and DEAF: what’s your experience in this sense?

Alex Adriaansen: We have to keep the two aspects separate: one is sponsorship while the other is a more complex form of partnership. The first can be obtained by activating a client for a certain event, though it’s not easy, both because relations with the companies are delicate and because it’s not easy to get it from smaller companies which have smaller budgets. Today companies from Germany, Austria and England sponsor festivals such as DEAF. But our main interest lies in the second aspect, which is to share the research departments with our clients. That works a lot. Private companies are used to working on products without thinking about their final use, their effective potential and the possible contents that a certain object could possess. V2 offers a huge content database which is available for universities and institutes as well.

Marco Mancuso: Who develops the ideas of these projects?

Alex Adriaansen: We meet every two months, put both ideas and the artists who collaborate with us on a table and, according to various parametres, we create a specific content. During DEAF festival in November people can see the projects physically, that’s why the festival is very important for the wide range of contacts that can be created and the possibility for us all to be seen.