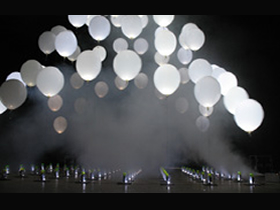 Sometimes things happen, a bit by chance. It is true, though, that in some cities by chance things happen easier than somewhere else. So it may happen to go for a walk to the Tesla Culture Centre in Berlin on a Friday rainy evening, maybe feeling a bit bored, just to take a look around at the installations, not all of them interesting, and then to come across the rehearsal of one of the best performances/audiovisual installations one have seen long since.

The performance we are talking about is ATOM by Christopher Bauder (already known by hardware geeks for his midiGun) and Robert Henke (a.k.a. Monolake , a.k.a. one of the main developers of Ableton Live software, and I would say that is enough for an introduction), created with the help of Till Beckmanne e Holger .

It is difficult, as for any really successful performance/installation, to explain why it is such an interesting experience. Let us try and simply describe it. We can say it is a grid of 8×8=64 helium balloons sliding silently along the vertical axis and controlled in their movement by a software designed by the artists themselves. By placing themselves at different heights, the white balloons create three-dimensional, almost sculpture-like patterns which rhythmically light up (singularly or in groups) thanks to a white led matrix set in the grid on the floor and perfectly synchronized with the audio component . But such a detached description cannot really describes why it is so extraordinarily delightful to stand in a totally dark room (who saw Tesla’s Kubus knows what black box we are talking about) and admire atoms of light and sound playing together and with our perceptive memories, shifting continuously from architectural, to organic and geometric suggestions. The only sensible thing I can write to introduce this interview is to keep an eye on the dates of this performance/installation and try to see it live.

In the meanwhile we gained hold of the artists and talked about Atom and their work in general:

Christopher Bauder: I work as a media artist and designer in Berlin . I was always interested in combining interactive installations, interfaces or visuals with musical aspects. I created some earlier projects in this manner like the “ToneLadder”, the “midiGun” or the 3D VJ software “3DJ” (for more information about the projects: http://www.whitevoid.com).

Robert Henke: I work in the field of computer generated sound and music, both as software developper and as artist. I am mainly known for my more club music oriented works as “Monolake” but in the past years also focused more on interaction and installation works. Christopher saw a performance of mine for a matrix of 64 lightbulbs and found simmilarities to his balloon project.

Bertram Niessen: How did the idea of ATOM come up?

Christopher Bauder: The “ATOM” performance is based on the installation piece “electric moOns” that was initially created as an interactive sculpture. But right from the beginning I wanted it to be performed as an audiovisual live performance. I saw Robert interacting musically and through light animations with another installation piece some years ago, which was wonderful and impressive. I was always a big fan of his music that hits the whole body and not just the ears with waves of sound. I asked him to collaborate on developing this project further. He agreed on casting his magic spell on the installation and “ATOM” was born as a joint creation of Robert and me.

Bertram Niessen: It would be interesting to know something about the concept. How did you develop it? Did you start from technical aspects or what?

Christopher Bauder: We started in some kind of a laboratory setup at the TESLA Berlin. I was setting up the installation and Robert started preparing bits of sound and music. He was also writing a little software application that would alllow him to send light animation patterns in sync with his music. I created new shapes and transitions for the height control of the balloons in an updated version of our control software. Then we started exchanging ideas about shapes, animations and sounds. We developed abstract ideas for several sets and started to improvise over a time span of 3 days. Then the final structure for the 40-50min performance was refined and tested in a couple of rehearsals right before the premiere performance on the 15. September at TESLA.

Robert Henke: The balloons matrix was allready exisiting when Christopher asked me for collaboration. We decided to split the work into two parts: He is controllling the height of the balloon and therefore the sculptural quality of the work, while I create the music and the LED patterns, which need to be one unitiy to become really impressive. I started with developing the mnoving LED patterns, then translated that into music and Christopher suggested a geometry for the patterns. Once we had enough sketches we came up with an overall structure and defined a more narrative flow.

Bertram Niessen: What’s the kind of synestesia you have developed for ATOM? Are there constant roles and rules in light-music relation or is it flexible according to your needs?

Robert Henke: There are basically three types of relationships: a multiple particle situation where the individual balloon is not important anymore but rather an overall experience of some flickering, living organism is achived. For this scenario the music can be decoupled completely as long as it is either also flickering or providing a counterpoint of long slowly moving drones. The second type of interaction is a strict mapping of discrete musical events to visual gestures and patterns. The typically produces the most breath taking and massive impression. And in a third step there is musical events that are synced to the sequencing of the LED patterns but not directly related to them. This is the most illustrative form, and it turned out that it is in fact the least convincing one. Therefore I focused on the first two types and derived more complex LED patterns by applying additional rules to the music to LED mappings. Those rules made it possible that for example a single note creates a moving pattern in time, which corresponds well with the decay of this note and creates and additional sense of space and time.

Christopher Bauder: There are certain rules for music, light and shape relationships. We also have some kind of a storybook for the show. But we both have lots of room for improvisation and modification according to mood and inspiration while playing the live performance.

Bertram Niessen: What are the main technical aspects of your work?

Christopher Bauder: The installation is controlled by midi signals converted into voltages. The height of the helium balloons is adjusted with a computer-controlled cable, whilst the internal illumination is accomplished using dimmable super-bright LEDs, creating a pixel in a warped 8×8 spatial matrix. Lights and positions of the balloons are controlled from two computers and two individual softwares. Robert controls light animations and outputs sound to a 4-channel audio system. I’m in control of the balloons positions and movements.

Robert Henke: The LEDs are driven via MIDI . The music is done via synthesis in Ableton Live. Each note played in Live is also sent to a MAX patch, that controls the LEDs, This MAX patch allows to do statistical clouds, movements, and complex mappings between incoming musical events and LED patterns. The MAX patch is controled during the performance from a faderbox. This allows to really play the LED pattern. Due to the usage of Live it is also possible to play the show differently each time, to leave more or less room for specific events depending on how we feel.

Bertram Niessen: Is the set up expensive? Do you think it will be easy for you to make it tour around?

Christopher Bauder: The costs of the system are quite high since it consists of so many components, this multiplied the costs of initially making the installation. The wole installation fits easily into 5 stage cases and can be shipped to any destination in the world within one week at reasonable costs. Only helium and new balloons are needed for each show. Next confirmed performance will be taking place at the 23rd of November at the STRP festival in Eindhoven , Netherlands .

Robert Henke: I believe this performance can become quite successful, since it provides a very unique experience. The performace at TESLA in Berlin was just a first test. The main bottle neck for excessive touring is the need for suited locations and that the balloon side of things is expensive and fragile.