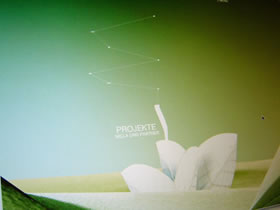 Andreas Schlegel, aka sojamo, devotes to computational design for one of the most important production and experimentation realties of interactive solutions with the new media: art+com of Berlin. His studies and his professional career define him today as a communication designer, a perfect multimedia engineer, besides being an artist whose interests are addressed to a generation of images in real- time motion, sensitive spaces, as well as to the communication dynamics within virtual networks.

In his web site there are plenty of works and experiments concerning interface design in its wide meaning, each one of which deserving to be seen. Remarkable is the operation of data collecting within the site which keeps trace, in a quite detailed way, of all the activities of the surfers, as Andreas expressly alerts “you give, you get, you leave some traces”.

His collaboration with a recent historic group of digital design such as art+com has not happened by chance. Funded in the far-off (in terms of frenetic development of technologies and new media) 1998, the German factory, established by Joachim Sauter has always aimed at working with computers trusting from the beginning that professional crossover which today pushes many designers up to the threshold of artistic programming, coining the expression computational design which is now so much used and abused.

Those are all elements present in the works of Andreas Schlegel, I had the chance to speak with on the subject of the procedural and generative art, as well as of his job as a designer and programmer within art+com.

Fabio Franchino: me about your idea of generative art.

Andreas Schlegel: Generative art meant both as practice and theory, has certainly a major role in my job. Anyway, I do not consider myself an expert on this matter. I especially find it interesting the concept of structure which lies behind the work and the final result. Kandisky, Malevitch, Cage, Xenakis, LeWitt, Nicolai and many others have inspired me a lot, particularly because all of them, even if in different ways, have pursued the attitude of generative methodologies, even if in different epochs, disciplines and backgrounds.

All of them have in common the will to work with systems which offer spaces and higher creative and interpretative chances. My job consists mostly of creating software and building systems of rules and instructions. In my job, a project is always made up of the gathering of small already- existing elements, which are connected by the code creating this way an aesthetic system. My approach to visual is definitely influenced by my graphic designer background and by my interest in visual art.

Fabio Franchino: Do you think that generative attitudes and methodologies can somehow influence the traditional creative process, rather then remaining relegated to a single range of research?

Andreas Schlegel: I think real changes may occur on the condition that there were a real interest from companies and institutions. Procedural systems are now present in the sphere of artistic research and in educational environments. I think the commercial sphere is an important factor in order to change things, to make people desire something new and therefore to get a real change of course in the world of creativity. I think it is still very difficult to explain the advantages of procedural systems to a wider public, which includes potential clients too.

Using the definition of generative practice to explain the meaning of a generative project doesn’t convince me, either. A real involvement for the observer very often lacks and this can’t be replaced by the only explanation of methodology. I personally appreciate generative works making use of real data such as inputs, to explain and visualize a certain environment, making it more comprehensible for the observer. In this case, I am a happy observer and consumer of the work.

Fabio Franchino: You are working with Art+Com as a computational-designer. Can you explain us your role in a typical project ordered and your approach to start and to carry out such a project?

Andreas Schlegel: Yes, I am currently working for art+com as a designer, devoting especially to interfaces and computational design. I consider the definition of computational design wide, concerning different design sectors, where the main tool is the computer and the use of the code. The way to approach a new project is very similar to the traditional one, which bases first of all on the concept of an idea and then on the phase of presentation of the prototype using processing and other graphic software applications. After the presentation, the project undergoes the productive stage where other subjects and professionalisms intervene.