In my opinion, 404.zero (media artist Kristina Karpysheva and audio visual designer Sasha Letsius) is one of the most interesting and inspiring art groups. Indeed in the last year they were invited to participate in the main festivals all around the world. They are from Russia and they first met when Kristina was still studying at the British Higher School of Art and Design, while Sasha had already been working with the famous art collective Tundra – which is a Russian multidisciplinary team of musicians, visual artists, sound engineers and programmers, focused on creating experiences and spaces through the production of live performances and immersive audiovisual installations. 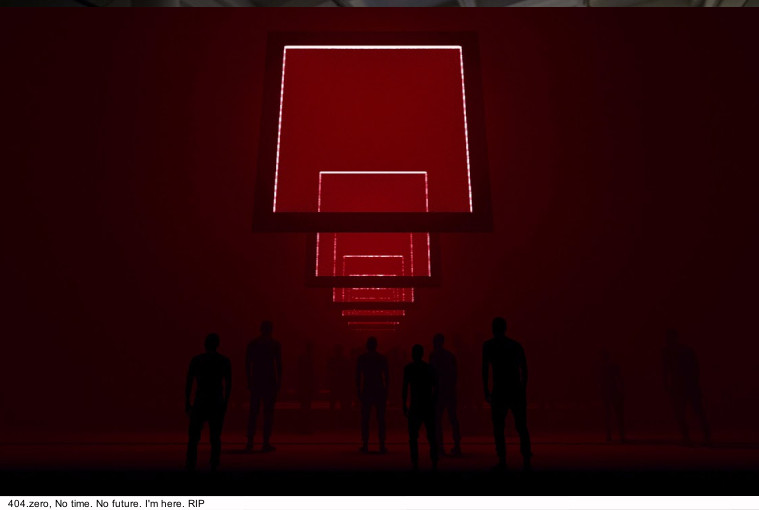 Kristina and Sasha started their collaboration creating a laser installation in Quartariata Residence in Peterhof, and then proposing an audiovisual performance at the Moscow Planetarium for SoundUp, then a performance at LACMA and Orpheum Theatre in the US. Since then, they have produced different pieces which explore the possibilities of multimedia language, especially using a touchdesigner software. They are fantastic not only for the advanced technology they use, but especially because their work is mystic and prophetic and tries to explore the mysterious meanings of life. They are lovely and immediately accepted an interview to talk about their artistic work, work which is “living on its own – entirely self-sufficient” as they stated.

Caterina Tomeo: My first perception was that your work is focused on the unknown, on the mysterious aspects of life, and at the same time there is a dreamlike vision of life…

404.zero: Yes you are right – kind of. I’d say the categories of death and unknown. The unknown inspires to create and explore. Acceptance of death eliminates any fear of criticism and devalues any goals altogether. A person, who can devalue everything, is absolutely free. In such a state of mind your talent peaks.

404 zero is renouncement. It is “nothingness”. It is abandonment from society and withdrawing from nonstop consumption – from everything that is breaking this world. 404.zero conjures a precise and clearly definite understanding of life’s concept.

The art project was born in an attempt to establish a definition of evisceration of conventional dogmas and values. In 2016 two artists joined together to create projects that could push the meaning of clarity to the limits in terms of modern generative art. 404.zero for us is a foundation that provides an opportunity for infinite creativity.

Caterina Tomeo: You produced different pieces: audiovisuals, installations, video mapping… When did you start to use TouchDesigner? Which are the possibilities that this software offers to explore and create?

404.zero: We started eight years ago with TouchDesigner. 404 – like three years ago. We like the perfect balance in TouchDesigner. You can do everything you want – patching, programming, connecting any devices – and everything is at your fingertips at all times. Do you need a new tool? please pack up! The timeline from the birth of any idea to a successful prototype is minimal. Another approach is that you can randomly connect anything and be surprised finding something unexpected and new. 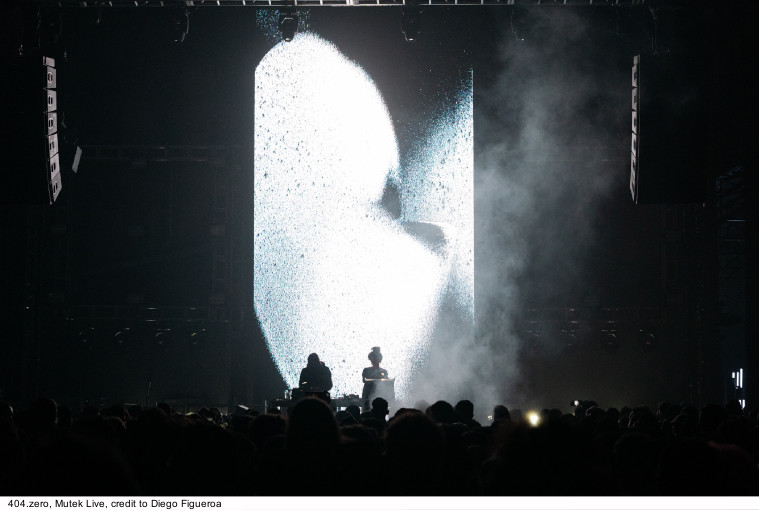 Caterina Tomeo: The sound dimension is very strong and it is in sync with lights and lasers, creating a perceptual and multisensorial slip of the audience…

404.zero: Yes. we are making all stuff for any installation in real time – no footages or samples. We create sound with modular synth: Buchla and Eurorack format.

Caterina Tomeo: I would define your work rather mathematical and scientific, but it is also prophetic as you give life to landscapes and imaginaries of the future. May I define you art shamans?

404.zero: Hehe we don’t know. This is on your side. In general yes – we are thinking most of the time about kind of math physics chemistry. this is very interesting. sometimes we would like to go deeper in this stuff. Maybe one day we will leave everything and will start something new.

Caterina Tomeo: What’s the role of the audience?

Caterina Tomeo: I think that in some of your pieces you were inspired by nature: does your inspiration come from your journeys all around the world or it is a trip of your mind?

404.zero:Both. We have don’t have any base or home; we just travel around the world all the time. Two years ago we found an article about Elon Musk’s project of sending eight artists on a trip around the moon in three years’ time.

Elon Musk was talking about an opportunity for artists, but he meant FAMOUS ones – so we realized “ooookey we need to be famous first”. We have one year.

Caterina Tomeo: My favorite work is Arrival, could you explain it? And what does it mean for you?

404.zero: The Arrival project started with an online presentation – a video posted on social media that had more than half a million views in a month. 404.zero started to receive proposals for the project implementation, but for a long time we could not find a proper venue. Location is extremely important for artists, as it is the synergy between space and artworks that creates the right environment for the viewer to live a new experience.

Finally, the we accepted the invitation of the Avant Gardner club in New York which hosted the opening of the installation in a new 1000m2 space.

From 27 to 29 December, visitors were able to witness the “arrival” of the Arrival installation, which consists of customized metal squares, lights and sound. We chose not to speculate on complicated conceptual meanings, as we interact with space instead – a multidimensional space which exists beyond the linear temporality, artistic manifesto or any imposed vision. The 404.zero group claims nothing with its works, allowing the viewers to find their own history and optics, their own way to perceive the artists’ work. The Arrival installation would generate form and time within the present moment, continuing to live its life during the show and detaching itself from its creators. The process of detaching is an important part of our statement as we think in the memories of the future regime. There is no time or space in the present moment, but only the vast expanses of the inconceivable. This philosophical connections between the rational and the irrational, the imaginary and the visual, the tangible and the conceptual underpin many of our projects, emphasizing the fact that all things exist within the cosmic space and one is unable to comprehend its infinity. And the topic of the constant in the Arrival project is precisely this: immersion in nothingness and dissolution in complete totality. Because everything in this universe consists of simple similarities, which seem complicated only from the space of our perception. 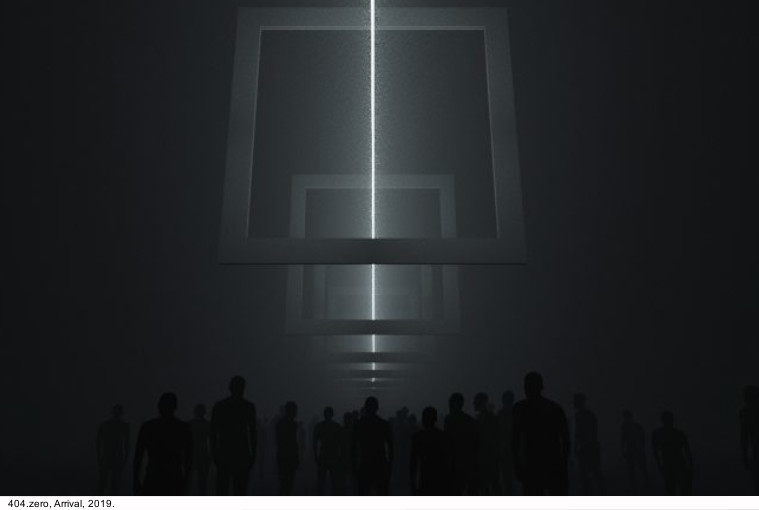 Caterina Tomeo: You usually publish the rendering of your projects. I am curious to know who are the customers of your work and also if you are able to find room in your days for commercial projects so to finance your artistic work and research.

404.zero: Three years ago we did not publish any of our concepts – you know, it is kind of secret. We sent them to many people such as managers, museums’ directors, producers, etc. And one day started finding a lot of works similar to ours: from agencies, famous artists, less known artists, even from our friends HaHa – and we realized “ok, if somebody wants to be raising in this way it is ok – let’s publish all we want”.

Caterina Tomeo: What do you think of artificial intelligence and its creative experimentation in the field of art – as you well know Russia is a world leader …

404.zero: We do not see any future as we expect humanity to destroy the entire planet before AI reaches a certain complexity level to be useful in art creation.

Caterina Tomeo: The last year you were invited to some of the most important festivals. It would be nice if you could come to Rome soon as well. Do you think is it possible? I have in mind a special event.

404.zero: if so, it will be something interesting for sure.

This accomplished and ever-ambitious duo of A/V architects and toolmakers cook up mind-altering experiences in generative art that require expertise in math, coding and the science of sound. By creating mesmerizing digital matter of frighteningly porous frontiers exclusively through TouchDesigner and modular gear, they push back the limits of footage and sample-free language that is opulent and breathtakingly singular. Taking as starting points their most irrepressible fascinations with death, the unknown and the cosmos, they craft thrilling, precise, painterly code-art that broaches big philosophical questions and provides mesmerizing though highly speculative answers.

Together, Kristina and Aleksandr create modern generative art and innovative tools that raise the bar on the synergistic possibilities of visuals and sound. Media artist Kristina has been integrating multidimensional features, performers and theatrical acts to her A/V exploits since 2015. Aleksandr co-founded the Tundra collective, which produces large-scale A/V installations. Since meeting at Moscow’s Mars Contemporary Art Centre in 2016, they’ve collaborated on a slew of immersive affairs, always up for the challenge of conjuring new things—modular music, generative visuals, and TouchDesigner tools. 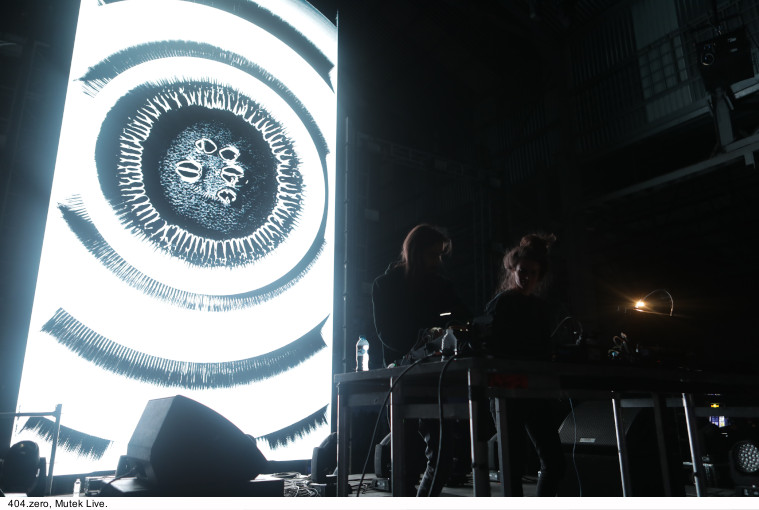 Given their immaculate rep for shaking up paradigms in modern generative art, it was only a matter of time before these digital diviners brought their modular memories of an opulent and disembodied future.