Autoritratto (Self-portrait) is a book written by Carla Lonzi and published for the first time in 1969. A sort of montage of transcribed interviews with a series of artists, which took place between 1965 and 1969, the book originates from Carla Lonzi’s intention to distinguish between artistic creativity and the controlled and mediated activity of art criticism and to bring out a form of self-expression and self-narration that would be immediate, spontaneous and genuine.

Autoritratto gives space to the authentic voices of the artists who tell their stories, however, it is also a self- portrait of Carla Lonzi who during the years in question decides to distance herself from art criticism as a field in order to explore a subjective dimension, radically different from the position of objectivity a critic assumes. “I am no longer an outsider” – is how she defines her relationship with creativity in the book’s foreword. In that sense, self-portraiture becomes a political gesture of taking the floor, of being in control of your own story. 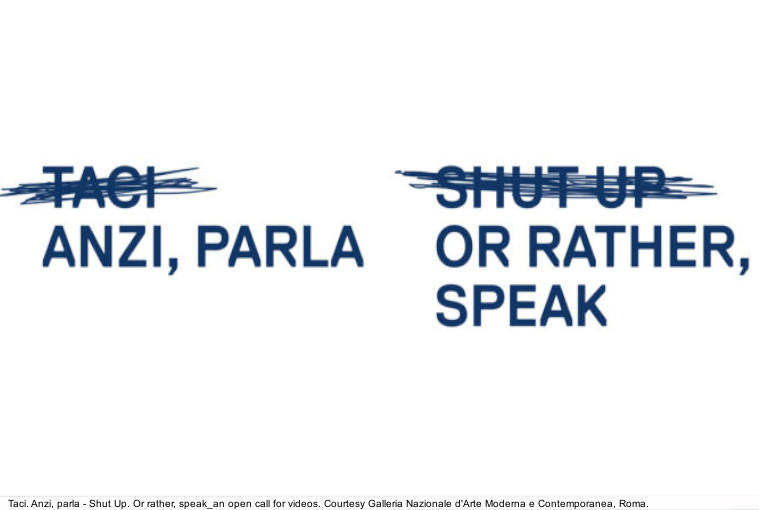 But what is the meaning of a self-portrait as a form of self-narration today? What are the instruments that would allow us to tell our stories in a way that is most immediate and spontaneous? During this moment of forced confinement (collective and individual at the same time), how can we create space for single subjectivities and visions? At a time when our lives take place exclusively within an intimate domestic space, self-representation has once again become a fundamental means for communicating with the rest of the world. Recently the digital spaces we inhabit have been flooded with live broadcasts, interviews, testimonials, diaries and tutorials. In one way or another, self-representation has become an inherent part of various fields, including the artistic and cultural sectors.

One of the essential characteristics of Carla Lonzi’s Autoritratto is the strong connection each protagonist has with the present, with contemporaneity. It is that connection that makes it possible for the ideas, visions and opinions to develop in the interviews, for the subjects to express themselves, through words, figures of speech and images that are part of this choral narration.

In the world we live in, with the problems we are currently facing, how can we make voices be heard? Would it be possible to recreate the same freedom and immediacy of self-expression that define the voices in the interviews of Autoritratto?

The call . Or rather, speak is an invitation to reflect on one’s voice, image, (hi)story and to self-narrate, beginning with one’s own experiences, in connection with the historic moment we are currently going through. The format of a (video) selfie, defined by Mirzoeff and other scholars in the field of visual studies as a digital performance, would allow us to construct our stories using both words and images, similarly to the interviews of Carla Lonzi, in which the intimacy of dialogues between her and the artists intersects with the personal photos of the protagonists, an intersection that helps create a protected space for thought and vision. Creating video selfies today will give us the possibility to construct a “singular collective”, in which every subject is free to choose their own form and definition, using self-portraiture as a radical gesture.

Following the call, a selection of videos will be promoted and divulged in order to offer further space to the voices and self-portraits of the participants.
The Galleria Nazionale will create visibility for the video contents by making them part of its exhibition activity, presenting them within its Lonzi Archive digital project in collaboration with Google Arts & Culture, and including the self-portraits and their subjects on the online platforms of the museum and collaborating partner institutions.