Digital Demagogue. Authoritarian Capitalism in the Age of Trump and Twitter

In his latest work, Digital Demagogue. Authoritarian Capitalism in the Age of Trump and Twitter, published by Pluto Press, Christian Fuchs – critical theorist of communication and society, as well as Professor at the University of Westminster – provides an excellent critical analysis of the current US President, Donald Trump, his social media strategy and the raise of right-wing authoritarianism within the social media era.

The specificity of Trump’s communication mode is internationally known, especially when convoyed into Twitter posts (we all remember: ‘Covfefe’, #FraudNewsCNN and #FakeNews) and in Digital Demagogue this subject is contextualized within a broader analysis of authoritarianism under communicative capitalism.

The theoretical foundations of Fuchs’ discourse are the Marxist and the Frankfurt School’s critical theory – in particular the authoritarianism models proposed by Theodor Adorno and Franz L. Neumann – while his analysis explores the emerging political and social ideological structures of populism in connection with new communication tools and models: the resulting conceptions are what the author calls “Trumpism” and “Trumpology”. 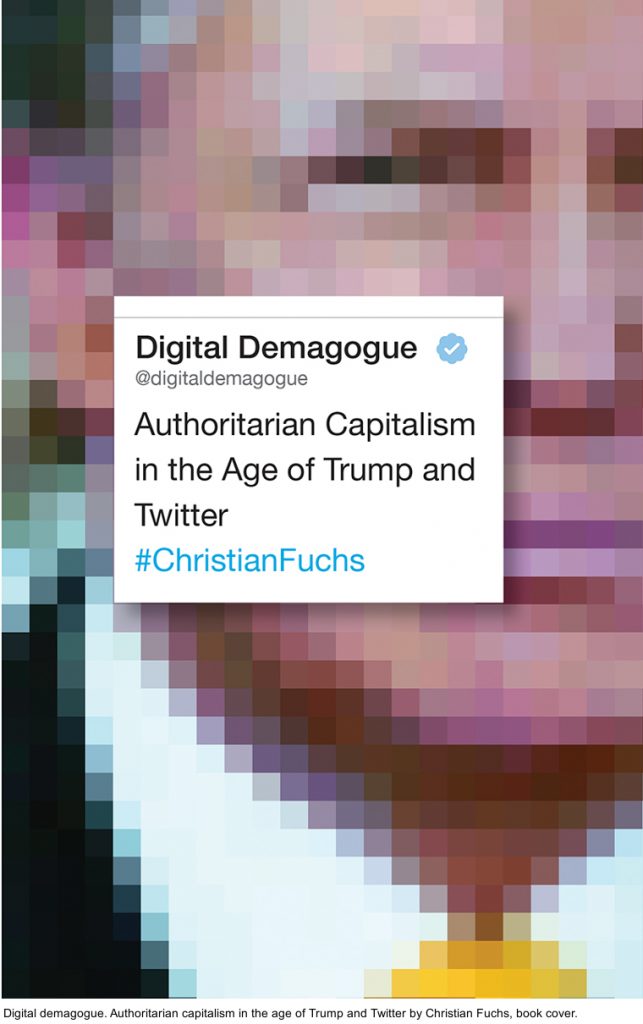 As written in the Introduction: “Right-wing authoritarianism celebrates new successes and is communicated through new formats, such as social media. Donald Trump as a president who uses the two communication tools of reality TV (The Apprentice) and social media (Twitter) is prototypical for how old ideologies are communicated through new media and how these ideologies take on new forms in the age of Internet spectacles”.

What emerges from the investigation is a sort of dangerous amplifying connection between authoritarism and social media, (in particular Twitter), that in the Conclusions the author further discusses, while trying to identify few alternatives and strategies as possible solutions to face the so called “Authoritarian Communicative Capitalism”.

Digital Demagogue is an excellent study on historical and theoretical conceptualization of authoritarian capitalism and it undeniably represents an indispensable resource for scholars, students, activists and engaged citizens interested in getting valuable insights and new perspectives on critical and communication theory.