Software for Less: the effects of software on contemporary society

arebyte Gallery presents Software for Less, an exhibition examining the cultural, social and political effects of software on contemporary society, by US artist Ben Grosser.

Grosser’s first solo exhibition in the UK, Software for Less, will take visitors on a journey through a pseudo tech exposition. Each work is presented as a product that could have come out of an alternative Silicon Valley, interrogating and reimagining how software is created, operated, and old. The exhibition provokes the viewer to consider the influence software has on us, foregrounding social media platforms as the main impetus; how is an interface that foregrounds our friend count changing our conceptions of friendship? Who benefits when a software system can intuit how we feel? Ultimately, questioning how software moulds who we are.

Grosser says: “The last twenty years have been characterized by the rise of software. Software has enabled the web, animated the smartphone, and made possible, in the words of one big tech CEO, a world “more open and connected.” Yet software, which is now used by billions  cross the planet every day, has embedded within it the capitalist ideologies of those who make it. Coming out of growth- obsessed entrepreneurial culture from Silicon Valley in the United States, today’s software wants what its creators want: more.” 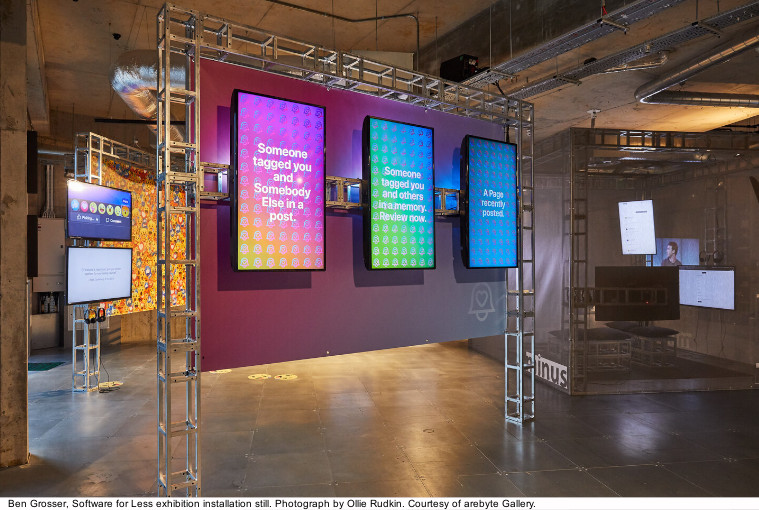 Grosser’s work bends and rewrites the rules of social media platforms to present the viewer with new and radically different ways of interacting within this space. The show examines big tech’s fixed spaces of consumption and prescribed interaction, as well as presenting alternative ways of experiencing them that are not guided by the principles of growth and capitalism. Utilising custom methods such as software recomposition, techniques such as data obfuscation, and genres that include video supercuts and net art, Software For Less presents functional applications and media-based artworks that produce less profit, less data, and less users.

At the centre of the exhibition is a new platform called Minus, a social network where users only get 100 posts—for life. Rather than the algorithmic feeds, visible “like” counts, and infinite scrolls employed by big tech to induce endless user engagement, Minus limits how much one posts to the feed, and foregrounds—as its only visible and dwindling metric – how few opportunities they have left. Not software for more, but Software for Less.

Four new works have been commissioned and created especially for the exhibition: Platform Sweet Talk, Minus, and both Get Less and DEFICIT OF LESS which are in dialogue with previous successful works Get More and ORDER OF MAGNITUDE.

The exhibition further presents the existing pieces Get More, ORDER OF MAGNITUDE, Safebook, Not For You, Twitter Demetricator, The Endless Doomscroller, and Tokenize This. Go Rando and Facebook Demetricator are also included, the former having been recently rewritten for the exhibition’s opening and the latter scheduled for rewriting during its run through a series of live coding sessions. A free events programme guided by the themes of the show will run concurrently with the exhibition.